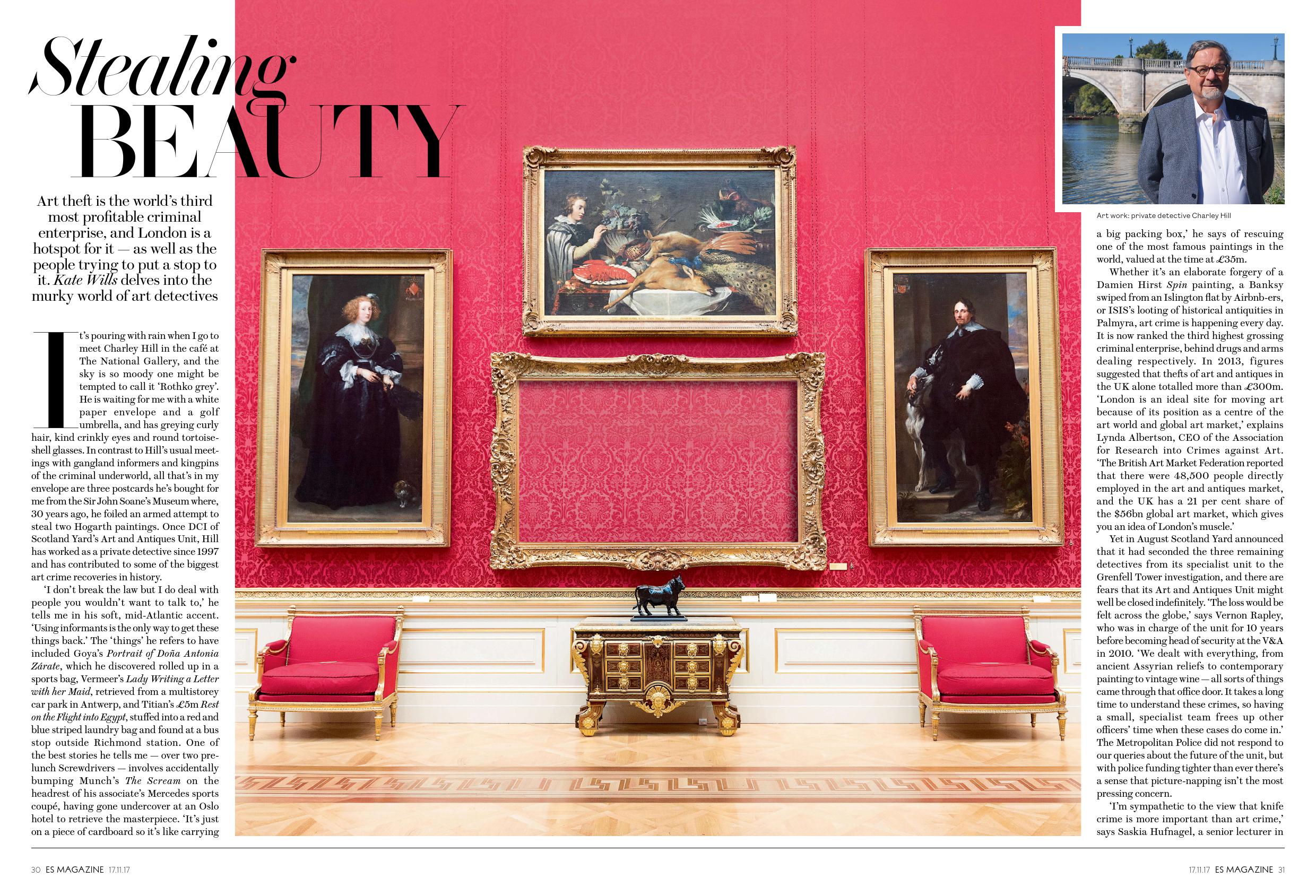 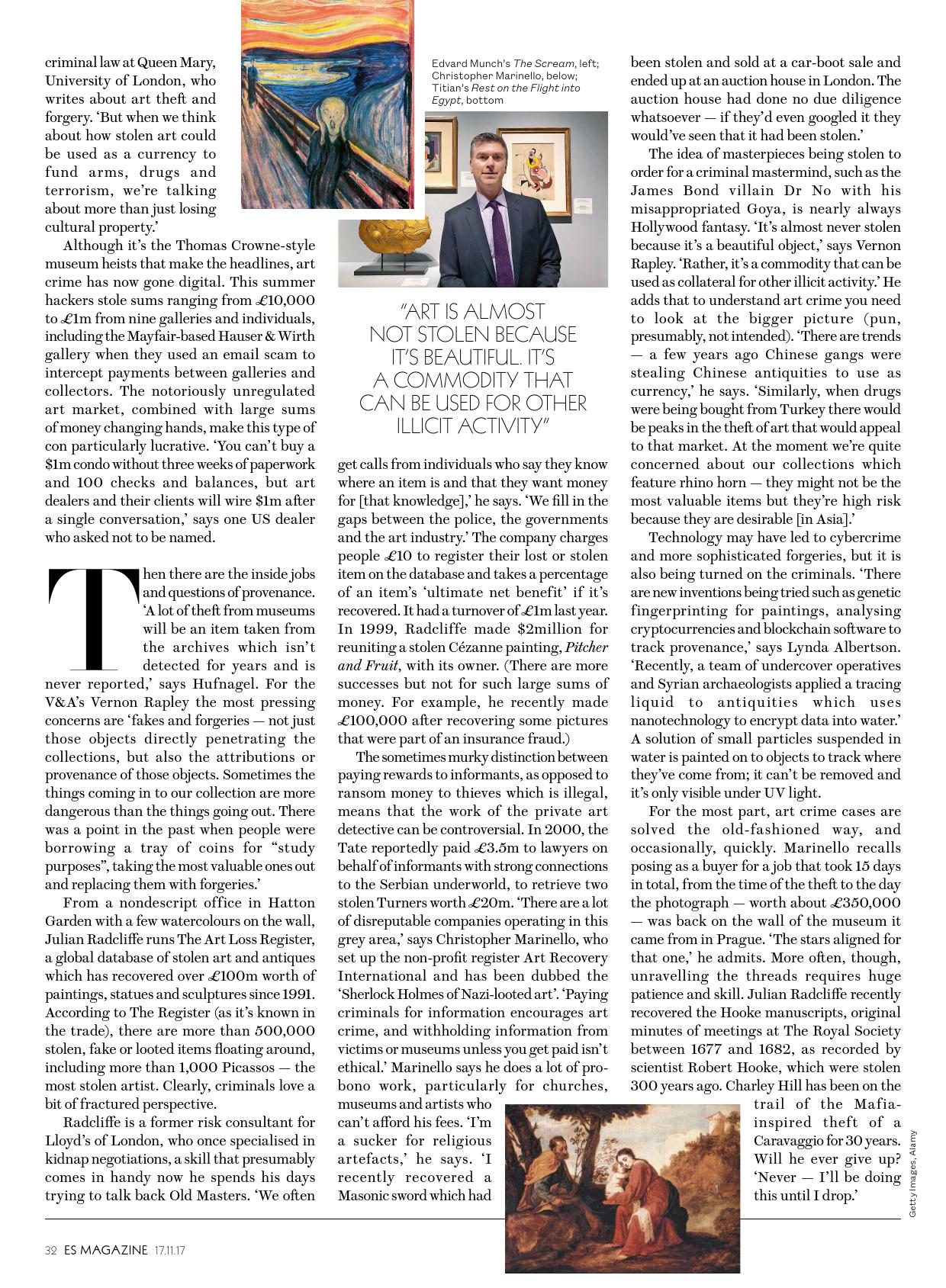 It’s pouring with rain when I go to meet Charley Hill in the cafÃ© at The National Gallery, and the sky is so moody one might be tempted to call it ‘Rothko grey’.

He is waiting for me with a white paper envelope and a golf umbrella, and has greying curly hair, kind crinkly eyes and round tortoiseshell glasses. In contrast to Hill’s usual meetings with gangland informers and kingpins of the criminal underworld, all that’s in my envelope are three postcards he’s bought for me from the Sir John Soane’s Museum where, 30 years ago, he foiled an armed attempt to steal two Hogarth paintings. Once DCI of Scotland Yard’s Art and Antiques Unit, Hill has worked as a private detective since 1997 and has contributed to some of the biggest art crime recoveries in history.

‘I don’t break the law but I do deal with people you wouldn’t want to talk to,’ he tells me in his soft, mid-Atlantic accent. ‘Using informants is the only way to get these things back.’

The ‘things’ he refers to have included Goya’s Portrait of DoÃ±a Antonia ZÃ¡rate, which he discovered rolled up in a sports bag, Vermeer’s Lady Writing a Letter with her Maid, retrieved from a multistorey car park in Antwerp, and Titian’s Â£5m Rest on the Flight into Egypt, stuffed into a red and blue striped laundry bag and found at a bus stop outside Richmond station. One of the best stories he tells me – over two pre-lunch Screwdrivers – involves accidentally bumping Munch’s The Scream on the headrest of his associate’s Mercedes sports coupÃ©, having gone undercover at an Oslo hotel to retrieve the masterpiece. ‘It’s just on a piece of cardboard so it’s like carrying a big packing box,’ he says of rescuing one of the most famous paintings in the world, valued at the time at Â£35m.

Whether it’s an elaborate forgery of a Damien Hirst Spin painting, a Banksy swiped from an Islington flat by Airbnb-ers, or ISIS’s looting of historical antiquities in Palmyra, art crime is happening every day. It is now ranked the third highest grossing criminal enterprise, behind drugs and arms dealing respectively. In 2013, figures suggested that thefts of art and antiques in the UK alone totalled more than Â£300m. ‘London is an ideal site for moving art because of its position as a centre of the art world and global art market,’ explains Lynda Albertson, CEO of the Association for Research into Crimes against Art.

‘The British Art Market Federation reported that there were 48,500 people directly employed in the art and antiques market, and the UK has a 21 per cent share of the $56bn global art market, which gives you an idea of London’s muscle.’

Yet in August Scotland Yard announced that it had seconded the three remaining detectives from its specialist unit to the Grenfell Tower investigation, and there are fears that its Art and Antiques Unit might well be closed indefinitely. ‘The loss would be felt across the globe,’ says Vernon Rapley, who was in charge of the unit for 10 years before becoming head of security at the V&A in 2010. ‘We dealt with everything, from ancient Assyrian reliefs to contemporary painting to vintage wine – all sorts of things came through that office door. It takes a long time to understand these crimes, so having a small, specialist team frees up other officers’ time when these cases do come in.’ The Metropolitan Police did not respond to our queries about the future of the unit, but with police funding tighter than ever there’s a sense that picture-napping isn’t the most pressing concern.

‘I’m sympathetic to the view that knife crime is more important than art crime,’ says Saskia Hufnagel, a senior lecturer in criminal law at Queen Mary, University of London, who writes about art theft and forgery. ‘But when we think about how stolen art could be used as a currency to fund arms, drugs and terrorism, we’re talking about more than just losing cultural property.’

Although it’s the Thomas Crowne-style museum heists that make the headlines, art crime has now gone digital. This summer hackers stole sums ranging from Â£10,000 to Â£1m from nine galleries and individuals, including the Mayfair-based Hauser & Wirth gallery when they used an email scam to intercept payments between galleries and collectors. The notoriously unregulated art market, combined with large sums of money changing hands, make this type of con particularly lucrative. ‘You can’t buy a $1m condo without three weeks of paperwork and 100 checks and balances, but art dealers and their clients will wire $1m after a single conversation,’ says one US dealer who asked not to be named.

Then there are the inside jobs and questions of provenance. ‘A lot of theft from museums will be an item taken from the archives which isn’t detected for years and is never reported,’ says Hufnagel. For the V&A’s Vernon Rapley the most pressing concerns are ‘fakes and forgeries – not just those objects directly penetrating the collections, but also the attributions or provenance of those objects. Sometimes the things coming in to our collection are more dangerous than the things going out. There was a point in the past when people were borrowing a tray of coins for “study purposes”, taking the most valuable ones out and replacing them with forgeries.’

From a nondescript office in Hatton Garden with a few watercolours on the wall, Julian Radcliffe runs The Art Loss Register, a global database of stolen art and antiques which has recovered over Â£100m worth of paintings, statues and sculptures since 1991. According to The Register (as it’s known in the trade), there are more than 500,000 stolen, fake or looted items floating around, including more than 1,000 Picassos – the most stolen artist. Clearly, criminals love a bit of fractured perspective.

Radcliffe is a former risk consultant for Lloyd’s of London, who once specialised in kidnap negotiations, a skill that presumably comes in handy now he spends his days trying to talk back Old Masters. ‘We often get calls from individuals who say they know where an item is and that they want money for [that knowledge],’ he says. ‘We fill in the gaps between the police, the governments and the art industry.’ The company charges people Â£10 to register their lost or stolen item on the database and takes a percentage of an item’s ‘ultimate net benefit’ if it’s recovered. It had a turnover of Â£1m last year. In 1999, Radcliffe made $2million for reuniting a stolen CÃ©zanne painting, Pitcher and Fruit, with its owner. (There are more successes but not for such large sums of money. For example, he recently made Â£100,000 after recovering some pictures that were part of an insurance fraud.)

The sometimes murky distinction between paying rewards to informants, as opposed to ransom money to thieves which is illegal, means that the work of the private art detective can be controversial. In 2000, the Tate reportedly paid Â£3.5m to lawyers on behalf of informants with strong connections to the Serbian underworld, to retrieve two stolen Turners worth Â£20m. ‘There are a lot of disreputable companies operating in this grey area,’ says Christopher Marinello, who set up the non-profit register ARTIVE.org and the art recovery organisation Art Recovery International and has been dubbed the ‘Sherlock Holmes of Nazi-looted art’. ‘Paying criminals for information encourages art crime, and withholding information from victims or museums unless you get paid isn’t ethical.’ Marinello says he does a lot of pro-bono work, particularly for churches, museums and artists who can’t afford his fees. ‘I’m a sucker for religious artefacts,’ he says. ‘I recently recovered a Masonic sword which had been stolen and sold at a car-boot sale and ended up at an auction house in London. The auction house had done no due diligence whatsoever – if they’d even googled it they would’ve seen that it had been stolen.’

The idea of masterpieces being stolen to order for a criminal mastermind, such as the James Bond villain Dr No with his misappropriated Goya, is nearly always Hollywood fantasy. ‘It’s almost never stolen because it’s a beautiful object,’ says Vernon Rapley. ‘Rather, it’s a commodity that can be used as collateral for other illicit activity.’ He adds that to understand art crime you need to look at the bigger picture (pun, presumably, not intended). ‘There are trends – a few years ago Chinese gangs were stealing Chinese antiquities to use as currency,’ he says. ‘Similarly, when drugs were being bought from Turkey there would be peaks in the theft of art that would appeal to that market. At the moment we’re quite concerned about our collections which feature rhino horn – they might not be the most valuable items but they’re high risk because they are desirable [in Asia].’

Technology may have led to cybercrime and more sophisticated forgeries, but it is also being turned on the criminals. ‘There are new inventions being tried such as genetic fingerprinting for paintings, analysing cryptocurrencies and blockchain software to track provenance,’ says Lynda Albertson. ‘Recently, a team of undercover operatives and Syrian archaeologists applied a tracing liquid to antiquities which uses nanotechnology to encrypt data into water.’ A solution of small particles suspended in water is painted on to objects to track where they’ve come from; it can’t be removed and it’s only visible under UV light.

For the most part, art crime cases are solved the old-fashioned way, and occasionally, quickly. Marinello recalls posing as a buyer for a job that took 15 days in total, from the time of the theft to the day the photograph – worth about Â£350,000 – was back on the wall of the museum it came from in Prague. ‘The stars aligned for that one,’ he admits. More often, though, unravelling the threads requires huge patience and skill. Julian Radcliffe recovered the Hooke manuscripts, original minutes of meetings at The Royal Society between 1677 and 1682, as recorded by scientist Robert Hooke, which were stolen 300 years ago. Charley Hill has been on the trail of the Mafia-inspired theft of a Caravaggio for 30 years. Will he ever give up? ‘Never – I’ll be doing this until I drop.’