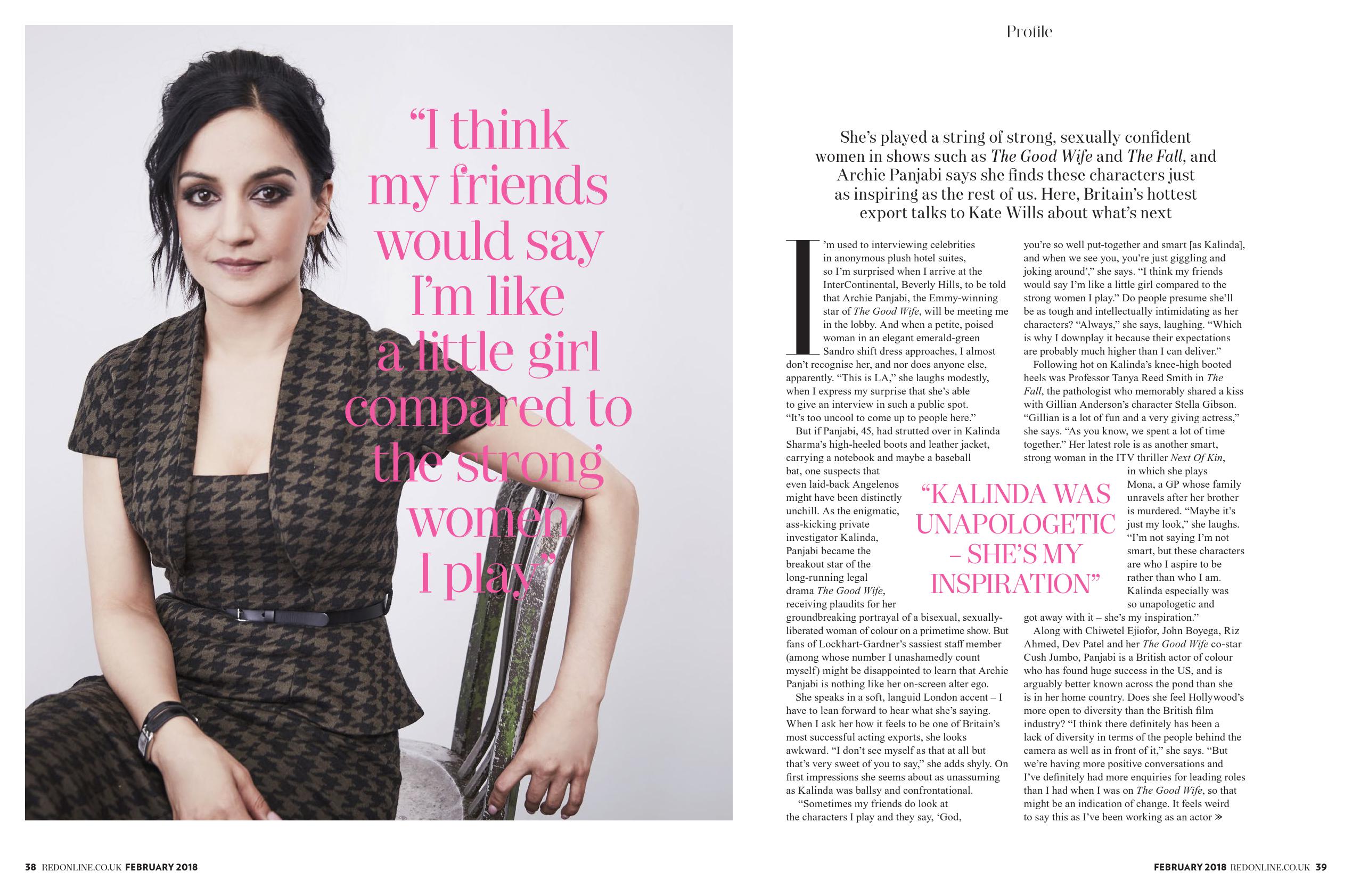 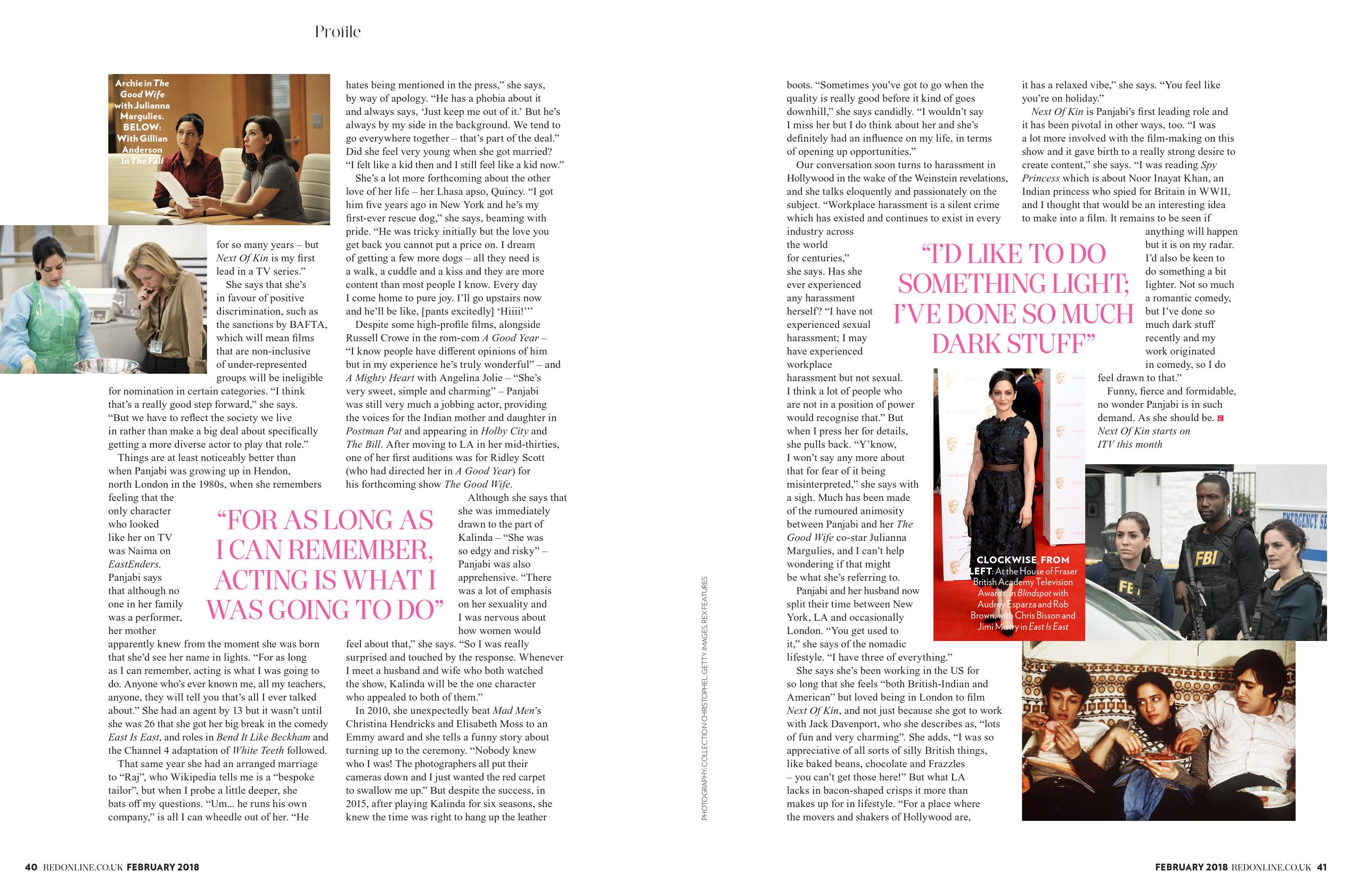 I’m used to interviewing celebrities in anonymously plush hotel suites, so I’m surprised when I arrive at the InterContinental, Beverly Hills to be told that Archie Panjabi, the Emmy-winning star of <The Good Wife> will be meeting me in the lobby. And when a petite, poised woman in an elegant emerald-green Sandro shift dress approaches, I almost don’t recognise her. And nor does anyone else, apparently. “This is LA,” she laughs modestly, when I express my surprise that she’s able to give an interview in such a public spot. “It’s too uncool to come up to people here.”

But if Panjabi, 45, had strutted over in Kalinda’s high-heeled boots and leather jacket, carrying a notebook and maybe a baseball bat, one suspects that even laid-back Angelenos might have been distinctly unchill. As the enigmatic, ass-kicking private investigator Kalinda Sharma, Panjabi became the breakout star of the long-running legal drama <The Good Wife>, receiving plaudits for her groundbreaking portrayal of a bisexual, sexually-liberated woman of colour on a primetime show. But fans of Lockhart-Gardner’s sassiest staff member (among whose number I unashamedly count myself) might be disappointed to learn that Archie Panjabi is nothing like her on-screen alter ego.

She speaks so softly – in a languid, London accent – that I have to lean forward to hear what she’s saying. When I ask her how it feels to be one of Britain’s most successful acting exports, she looks awkward and stares at the floor. “I don’t see myself as that at all but that’s a very sweet thing for you to say,” she mumbles. On first impressions she seems about as shy and unassuming as Kalinda was ballsy and confrontational.

“Sometimes my friends do look at the characters I play and they say ‘God you’re so well put-together and smart [on screen], and when we see you you’re just giggling and joking around’,” she says. “I think my friends would say I’m like a little girl compared to the strong women I play.” Do people presume she’ll be as tough and intellectually-intimidating as her characters? “Always,” she says, laughing. “Which is why I downplay it because their expectations are probably much higher than I can deliver.”

Following hot on Kalinda’s knee-high-booted heels was Professor Tanya Reed Smith in <The Fall>, the pathologist who memorably shared a kiss with Gillian Anderson’s character Stella Gibson. “Gillian is a lot of fun and a very giving actress,” she smiles. “As you know we spent a lot of time together.” Her latest role is as another smart, strong woman in the ITV thriller <Next of Kin>, where she plays Mona, a GP whose family unravels after her brother is murdered. “Maybe it’s just my look,” she laughs. “I’m not saying I’m not smart, but these characters are who I aspire to be rather than who I am. Kalinda especially was so unapologetic and got away with it – she’s my inspiration.”

Along with Chiwetel Ejiofor, John Boyega, Riz Ahmed, Dev Patel and her <Good Wife> co-star Cush Jumbo, Panjabi is a British actor of colour who has found huge success in the US, and is arguably better known across the pond than she is in her home country. Does she feel Hollywood is more open to diversity than the British film industry? “I think there definitely has been a lack of diversity in terms of the people behind the camera as well as in front of it,” she says. “But we’re having more positive conversations and I’ve definitely had more enquiries for leading roles than I had when I was on <The Good Wife>, so that might be an indication of change. It feels weird to say this as I’ve been working as an actor for so many years  – but <Next of Kin> is my first lead in a TV series.”

She says that she’s in favour of positive discrimination, such as the sanctions by BAFTA that will mean films which are non-inclusive of underrepresented groups will be ineligible for nomination in certain categories. “I think that’s a really good step forward,” she says. “But we have to reflect the society that we live in rather than make a big deal about specifically getting a more diverse actor to play that role.”

Things are at least noticeably better than when Panjabi was growing up in Hendon, north London in the 1980s, when she remembers feeling that the only character who looked like her on TV was Naima on <EastEnders>. Panjabi says that although no one in her family was a performer, her mother apparently knew from the moment she was born that she’d see her name in lights. “For as long as I can remember acting is what I was going to do. Anyone who’s ever known me, all my teachers, anyone, they will tell you that’s all I ever talked about.” She had an agent by 13 but it wasn’t until she was 26 that she got her big break in the comedy <East is East>, and roles in <Bend it Like Beckham> and the Channel 4 adaptation of <White Teeth> followed.

Despite some high-profile films, alongside Russell Crowe in the rom-com <A Good Year> – “I know people have different opinions of him but in my experience he’s truly wonderful” – and <A Mighty Heart> with Angelina Jolie – “she’s very sweet, simple and charming” – Panjabi was still very much a jobbing actor, providing the voices for the Indian mother and daughter in <Postman Pat> and appearing in <Holby City> and <The Bill>. Then one of her first auditions after moving to LA in her mid-thirties, was for Ridley Scott (who had directed her in <A Good Year>) for his forthcoming show <The Good Wife>.

Although she says that she was immediately drawn to the part of Kalinda “she was so edgy and risky”, Panjabi was also apprehensive. “There was a lot of emphasis on her sexuality and I was really nervous about how women would feel about that,” she says. “So I was really surprised and touched by the response. Whenever I meet a husband and wife who both watched the show, Kalinda will be the one character who appealed to both of them.”

Playing one of the few bisexual characters on primetime TV, Panjabi felt a huge responsibility to the LGBT community. “What’s interesting is that people who were homophobic or nervous to talk about bisexuality changed as a result of Kalinda,” she says.  “The best thing about that character was that her bisexuality wasn’t a label stuck on her. No issue was made about her diversity.”

In 2010 she unexpectedly beat <Mad Men>’s Christina Hendricks and Elisabeth Moss to an Emmy award and she tells a funny story about turning up to the ceremony when “nobody knew who I was! The photographers all put their cameras down and I just wanted the red carpet to swallow me up.” But despite the success, in 2015, after six years of playing Kalinda, she knew the time was right to hang up the leather boots. “Sometimes you’ve got to go when the quality is really good before it kind of goes downhill,” she says candidly. “I wouldn’t say I miss her but I do think about her and she’s definitely had an influence on my life in terms of opening up opportunities.”

Our conversation soon turns to harassment in Hollywood in the wake of the Weinstein revelations, and she talks eloquently and passionately it. “Workplace harassment is a silent crime which has existed and continues to exist in every industry across the world for centuries,” she says. Has she ever experienced any harassment herself? “I have not experienced sexual harassment, I may have experienced workplace harassment but not sexual. I think a lot of people who are not in a position of power would recognise that.” But when I press her for details, she pulls back. “Y’know, I won’t say any more about that for fear of it being misinterpreted,” she says with a sigh. Much has been made of the rumoured animosity between Panjabi and her <Good Wife> co-star Julianna Margulies, and I can’t help wondering if that might be what she’s referring to.

Panjabi now splits her time between New York, LA and occasionally London. “You get used to it,” she says of the nomadic lifestyle. “I have three of everything.” She says she’s been working in the US for so long that she feels “both British-Indian and American” but loved being back in London to film <Next of Kin>, and not just because she got to work with Jack Davenport who she describes as “lots of fun and very charming”. “I was just so appreciative of all sorts of silly British things being back,” she says. “I was really into baked beans, chocolate and Frazzles – you can’t get those here!” But what LA lacks in bacon-shaped crisps it more than makes up for in lifestyle. “For a place where the movers and shakers of Hollywood are, it has a relaxed vibe,” she says. “You feel like you’re on holiday.”

<Next of Kin> is Panjabi’s first leading role and it has been pivotal in other ways, too. “I was a lot more involved with the film-making on this show and it gave birth to a really strong desire to create content,” she says. “I was reading <Spy Princess> which is about Noor Inyat Khan, an Indian princess who spied for Britain in WWII and I thought that would be an interesting idea to make into a film. It remains to be seen if anything will happen but it is on my radar. I’d also be keen to do something a bit lighter. Not so much a romantic comedy, but I’ve done so much dark stuff recently and my work originated in comedy, so I do feel drawn to that.”

There is one aspect of her personality which Panjabi shares with the famously mysterious Kalinda – how intensely she guards her private life. She was married at 26 in an arranged marriage to Raj, who Wikipedia tells me is a “bespoke tailor”, but when I ask any questions about him, she smiles and looks away. “Um… he runs his own company,” is all I can wheedle out of her. “He hates being mentioned in the press. He has a phobia about it and always says ‘Just keep me out of it’. But he’s always by my side in the background. We tend to go everywhere together – that’s part of the deal.” Did she feel very young when she got married? “I felt like a kid then and I still feel like a kid now.”

She’s a lot more forthcoming about the other love of her life – her lhasa apso Quincy. “I got him five years ago in New York and he’s my first ever rescue dog,” she says, beaming with pride. “He was tricky initially but the love you get back you cannot put a price on. I dream of getting a few more dogs – all they need is a walk, a cuddle and a kiss and they are more content than most people I know. Every day I come home to pure joy. I’ll go upstairs now and he’ll be like <pants excitedly> ‘Hiiiii!’”

And with that she walks calmly out of the lobby and up to her room. Archie Panjabi may not get recognised everywhere she goes, but when she does, it’s not just Quincy who’s excited to see her.