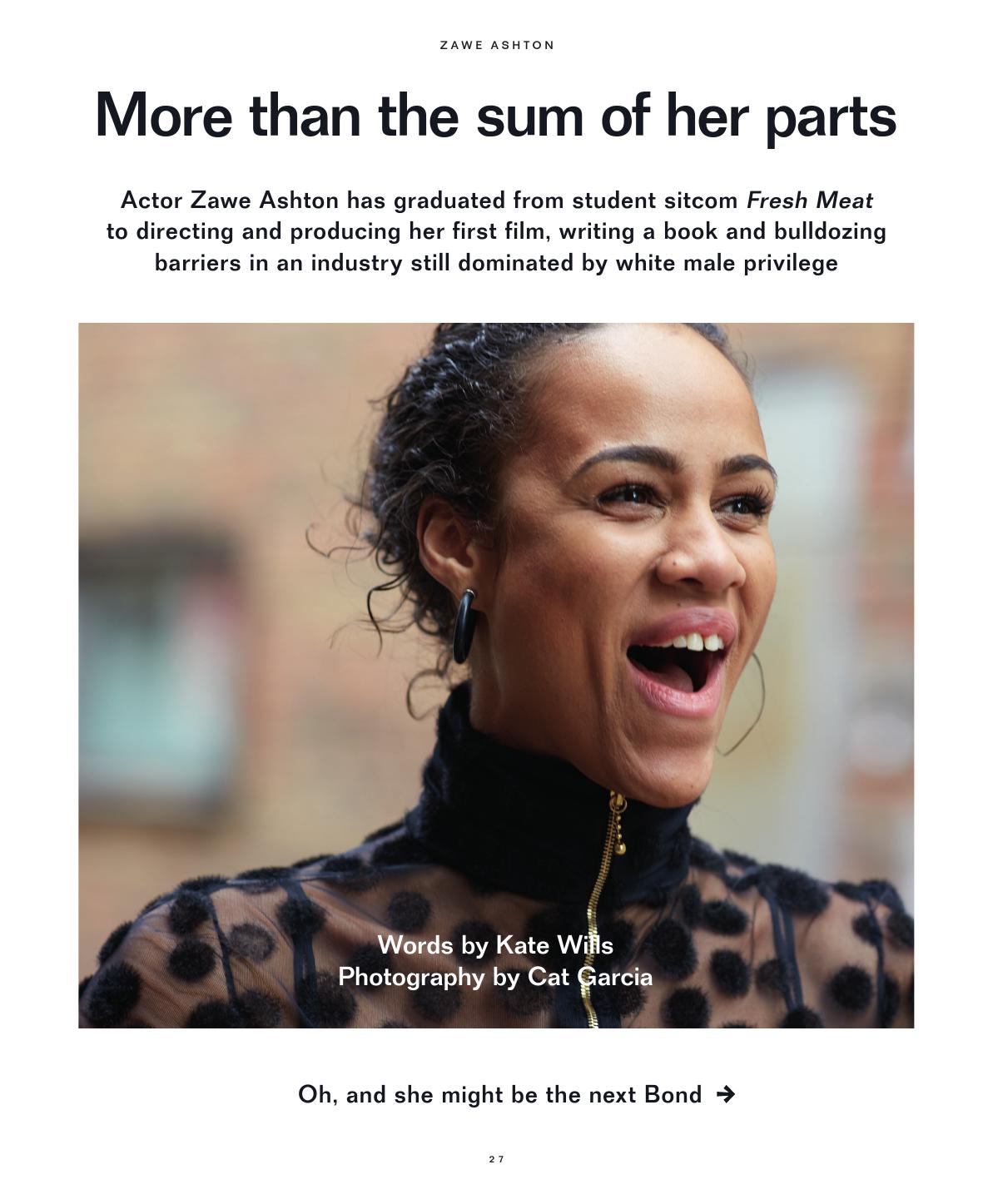 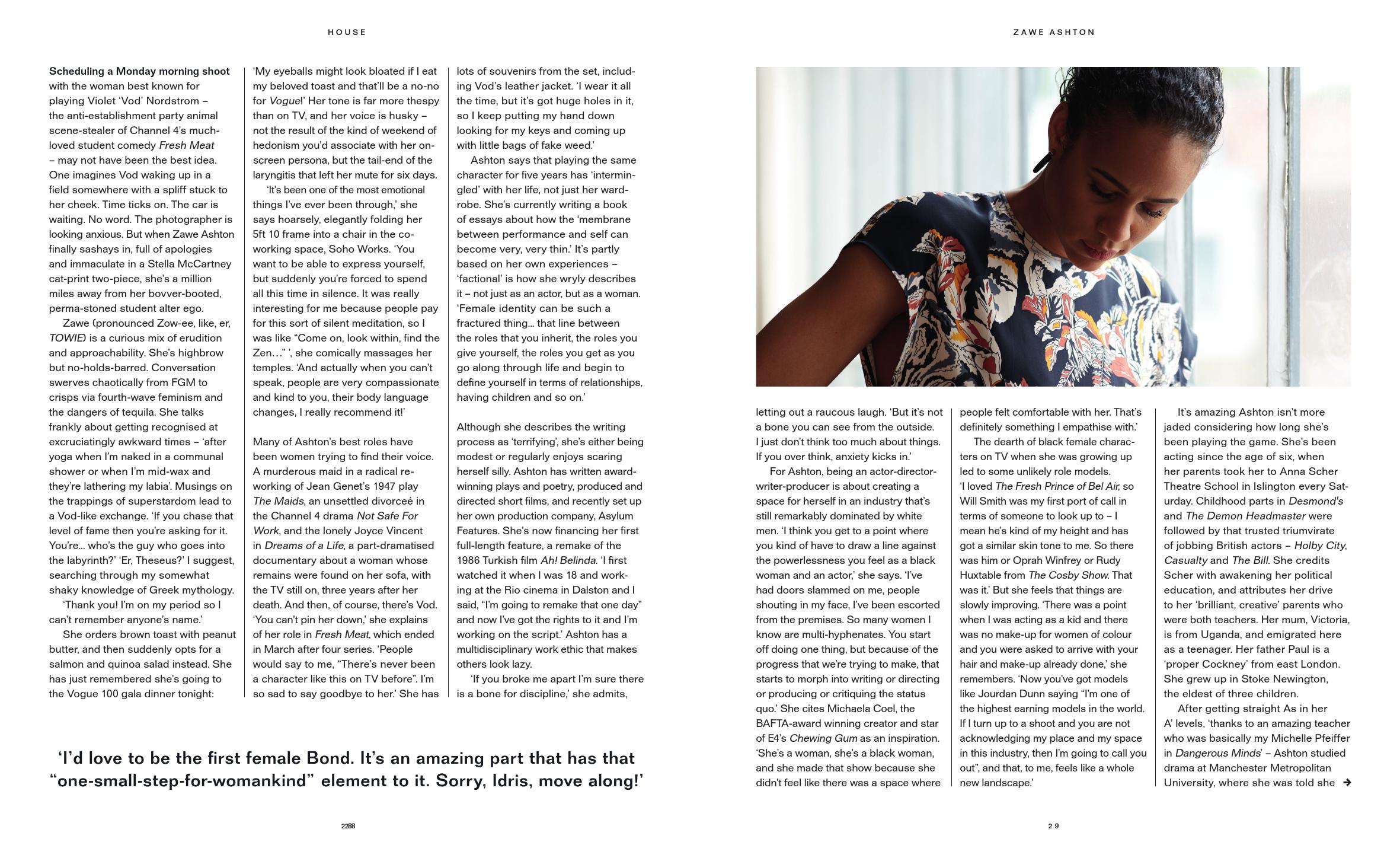 More than the sum of her parts

Actor Zawe Ashton has graduated from student sitcom Fresh Meat to directing and producing her first film, writing a book and bulldozing barriers in an industry still dominated by white male privilege. Oh, and she might be the next Bond

Scheduling a shoot for first thing on a Monday morning with the woman best known for playing Vod from <Fresh Meat> may not have been the best idea. One imagines Vod waking up in a field somewhere with a spliff stuck to her cheek. Time ticks on. The car is waiting. There’s no word. But when Zawe Ashton finally sashays in full of apologies, immaculate in a Stella McCartney cat-print two-piece, she’s virtually unrecognisable from her bovver-booted, perma-stoned student alter ego.

Zawe (pronounced Zow-ee like Bowie) is a curious mix of erudite and approachable, high-brow but also no-holds-barred. Conversation swerves chaotically from FGM to crisps falling out of her hair, via fourth-wave feminism and the dangers of tequila. She talks frankly about getting recognised at excruciatingly awkward times – “after yoga when I’m naked in a communal shower or when I’m mid-wax and they’re lathering my labia”. Musings on the trappings of superstardom lead to an almost Vod-like exchange. “If you chase that level of fame then you’re asking for it. You’re… who’s the guy who goes that into the labyrinthe?” Er, Theseus? I suggest, searching through my somewhat shaky knowledge of Greek mythology. “Thank you! I’m on my period so I can’t remember anyone’s name.”

She orders brown toast with peanut butter, and then suddenly opts for a salmon salad instead. She has just remembered that she’s going to the Vogue 100 gala tonight – “my eyeballs might look bloated if I eat my beloved toast and that’ll be a no no for Vogue!” Her voice is posher and more considered than it is on TV, and also incredibly husky – not the result of a Vod-esque weekend of hedonism, she tells me, but the tail-end of a bout of laryngitis which left her mute for “six whole days”.

“It’s been one of the most emotional things I’ve ever been through,” she says hoarsely, elegantly crossing her 5ft 10 frame into a tiny school-style chair. “You want to be able to express yourself, but suddenly you’re forced to spend all this time in silence. It was really interesting for me because people pay for this sort of silent meditation so I was like ‘Look within, find the zen…’”, she comically massages her temples. “And actually when you can’t speak, people are very compassionate and kind to you, their body language changes, I really recommend it!”

Many of Ashton’s best roles have been women trying to find their voice. A murderous maid in a radical reworking of Jean Genet’s 1947 play <The Maids>, an unsettled divorceÃ© in the Channel 4 drama <Not Safe For Work>, and the lonely Joyce Vincent in <Dreams of a Life>, a part-dramatised documentary about a woman whose remains were found on her sofa, with the TV still on, three years after her death. And then of course there’s Violet Nordstrom, better known as Vod. “You can’t pin her down,” she explains of her show-stealing part on the student sitcom <Fresh Meat>, which ended in March after four series. “People would say to me ‘There’s never been a character like this on TV before’. I’m so sad to say goodbye to her.” She has lots of souvenirs from the set, including Vod’s leather jacket. “I wear it all the time, but it’s got huge holes in it so I keep putting my hand down looking for my keys and coming up with fake little bags of weed.”

Playing the same character for five years has “intermingled” with her life, not just her wardrobe. She’s currently writing a book of essays about how the “membrane between performance and self can become very, very thin.” It’s partly based on her own experiences – “factional” is how she wryly describes it – not just as an actor, but as a woman. “Female identity can be such a fractured thing…that line between the roles that you inherit, the roles you give yourself, the roles that as you get as you go along through your life and begin to define yourself in terms of relationships, having children…”

Although she describes the writing process as “terrifying”, she clearly thrives off the fear. Ashton has written plays, produced and directed short films and has set up her own production company – Asylum Features. She’s in the process of financing her first feature film, a remake of the 1986 Turkish film <Ah! Belinda>. “I first watched it when I was 18 and working at the Rio cinema in Dalston and I said ‘I’m going to remake that one day’ and now I’ve got the rights to it and I’m working on the script.” It’s the kind of multidisciplinary work ethic that makes Lena Dunham look lazy.

“If you broke me apart I’m sure there is one bone in me that says discipline,” she admits, letting out a raucous laugh. “But it’s not a bone that’s easily seen from the outside. I just don’t think too much about things, that has to be my starting point. If you overthink it, that’s when the anxiety kicks in.”

For Ashton, being an actor-director-writer-producer is about creating a space for herself in an industry that’s still remarkably dominated by white men. “I think you get to a point where the line gets drawn with the powerlessness you feel as a black woman and an actor,” she says. “I’ve had doors slammed on me, people shouting in my face, I’ve been escorted from the premises. So many women I know are multihyphenates. You start off doing one thing but because of the progress that we’re trying to make…that starts to morph into writing or directing or producing or critiquing the status quo.” She cites Michaela Cole, the BAFTA-award winning creator and star of <Chewing Gum> on E4 as an inspiration. “She’s a woman, she’s a black woman, and she made that show because she didn’t feel there was a space where people felt comfortable with her and that’s definitely something I feel.”

The dearth of black female characters on TV when she was growing up led to some unlikely role models. “I loved The Fresh Prince of Bel Air, so Will Smith was my first port of call in terms of someone to look up to – I mean he’s kind of my height and got a similar skin tone. Him or Oprah Winfrey or Rudy Huxtable. That was it.” But she feels that things are slowly improving. “There was a point when I was acting as a kid and there was no make up for women of colour and you were asked to arrive having your hair and makeup already done,” she remembers. “Now you’ve got models like Jourdan Dunn saying ‘I’m one of the highest earning models in the whole world. If I turn up to a shoot and you are not acknowledging my place and my space in this industry, then I’m going to call you out’ and that, to me, feels like a whole new landscape.”

It’s amazing Ashton isn’t more jaded considering how long she’s been playing the game. She’s been acting since the age of 6, when her parents took her to Anna Scher Theatre School in Islington every Saturday. Childhood roles in Desmond’s and The Demon Headmaster were followed by that trusted triumvurate of British acting gigs – Holby City, Casualty and The Bill. She credits Scher with awakening her political education, and attributes her almost-zealot like drive to her “brilliant, creative” parents who were both teachers. Her mum, Victoria, is from Uganda, and emigrated here as a teenager. Her father Paul is a “proper cockney” from east London. “All the dropping me to auditions they’ve done and the times they’ve supported me when it hasn’t been a bed of roses does make you strive that little bit more to turn it into something worthwhile,” she explains.

After getting straight A-s in her A-levels she studied drama at Manchester Met, where she was told she wasn’t a “commercial commodity”, which must amuse her now that she is being touted as both the next Dr Who and the next James Bond. “People love putting me into these iconic male roles,” she laughs. “I know I’m naturally androgynous in some ways but…come on! I’d love to be the first female Bond. It would be an amazing part that also has that one small step for womankind element to it. Sorry Idris, move along!” Although she describes herself as an “indy girl at heart” she’d love to make a big blockbuster. “I have a huge love of musicals and cheesy big budget stuff. Not being pigeonholed is the dream. Someone like Tilda Swinton’s career I really admire because she always makes every role as enigmatic as her persona.”

Hollywood has been courting her and last year she filmed a pilot for HBO about the Salem witch trials, directed by Gus Van Sant – “he’s so quiet but he sees EVERYTHING!”. The series didn’t get picked up, but Ashton loved spending time in LA. “I’m really into the David Lynch surreal dark undertones of the city…I love how diabolical it is”. She could see herself moving there, or Paris, but also says she’s “at that point in my life where I could live anywhere”. She recently bought her own house in Clapton, “embarrassingly close to my parents” but won’t discuss if she’s single or otherwise. “I don’t talk about any love lives – past or present or future!” she jokes. “Of course, when Ryan Gosling realises that we’re supposed to be together that’s when I’ll shout about it.”

Now she’s off to “get my grooms on” for our photoshoot, which will see her stripping off in the middle of a Shoreditch street for an impromptu outfit change. “Come and get itttt!” she cackles as she whips off her trousers. Vod would definitely approve.