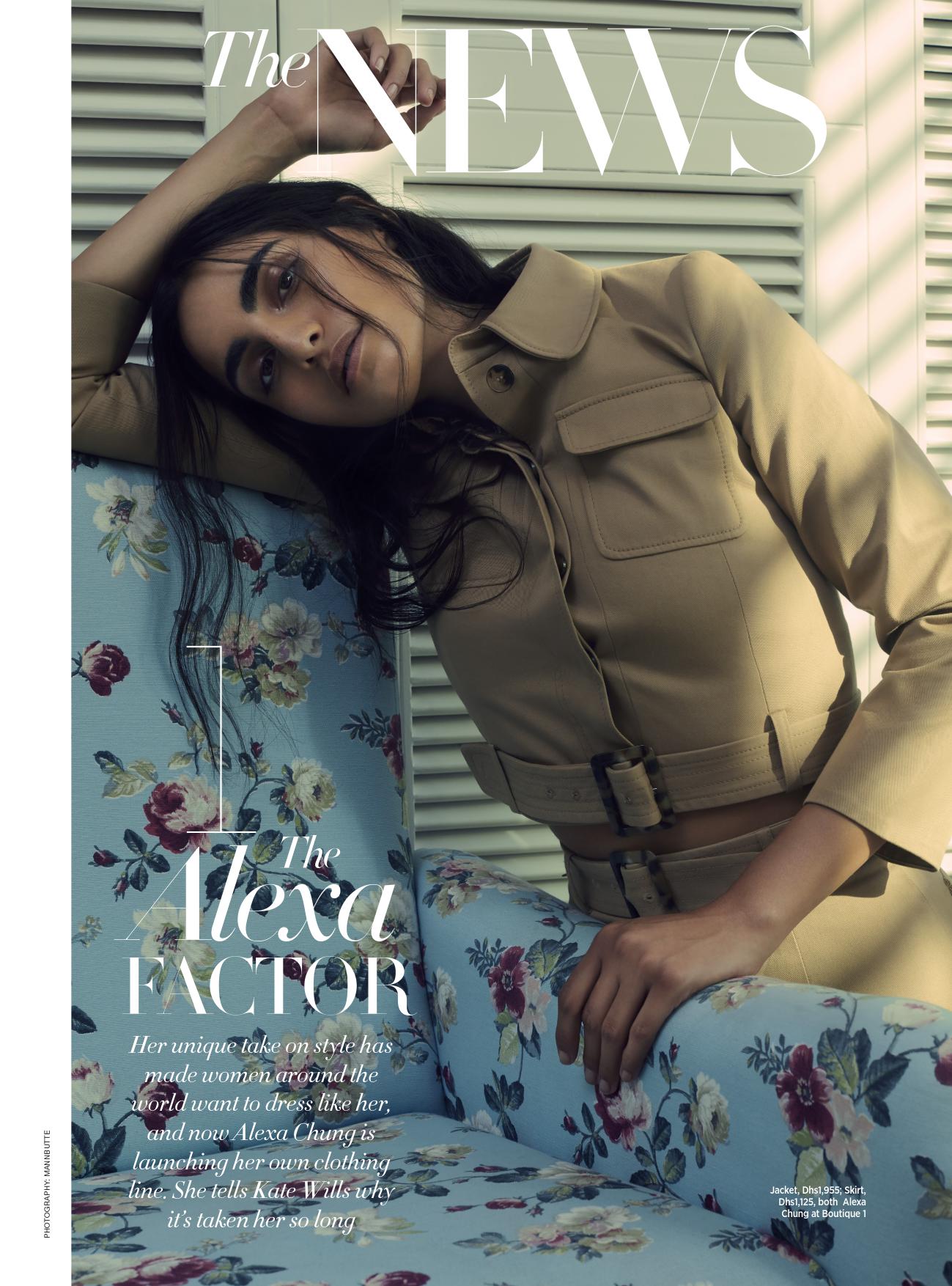 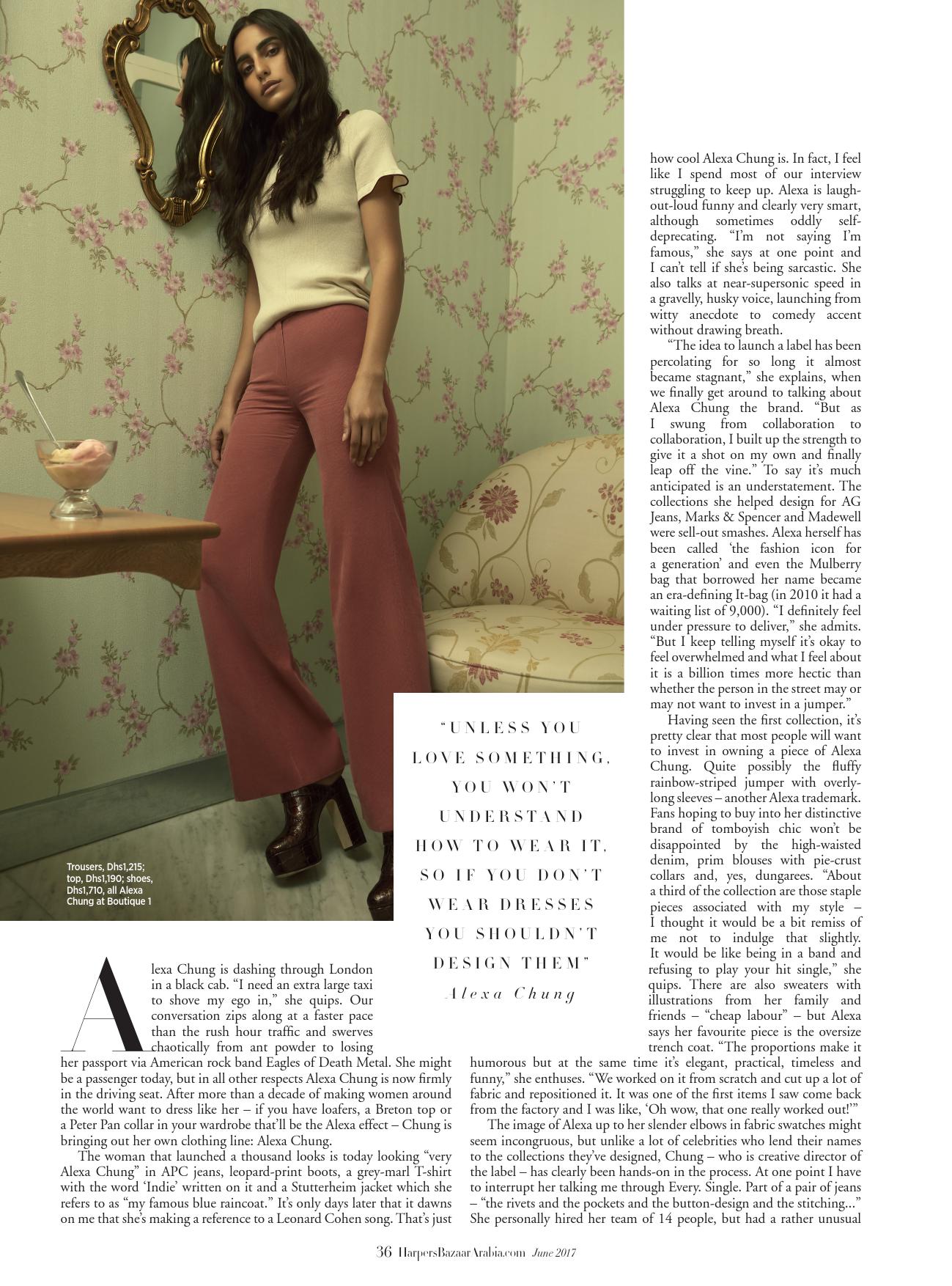 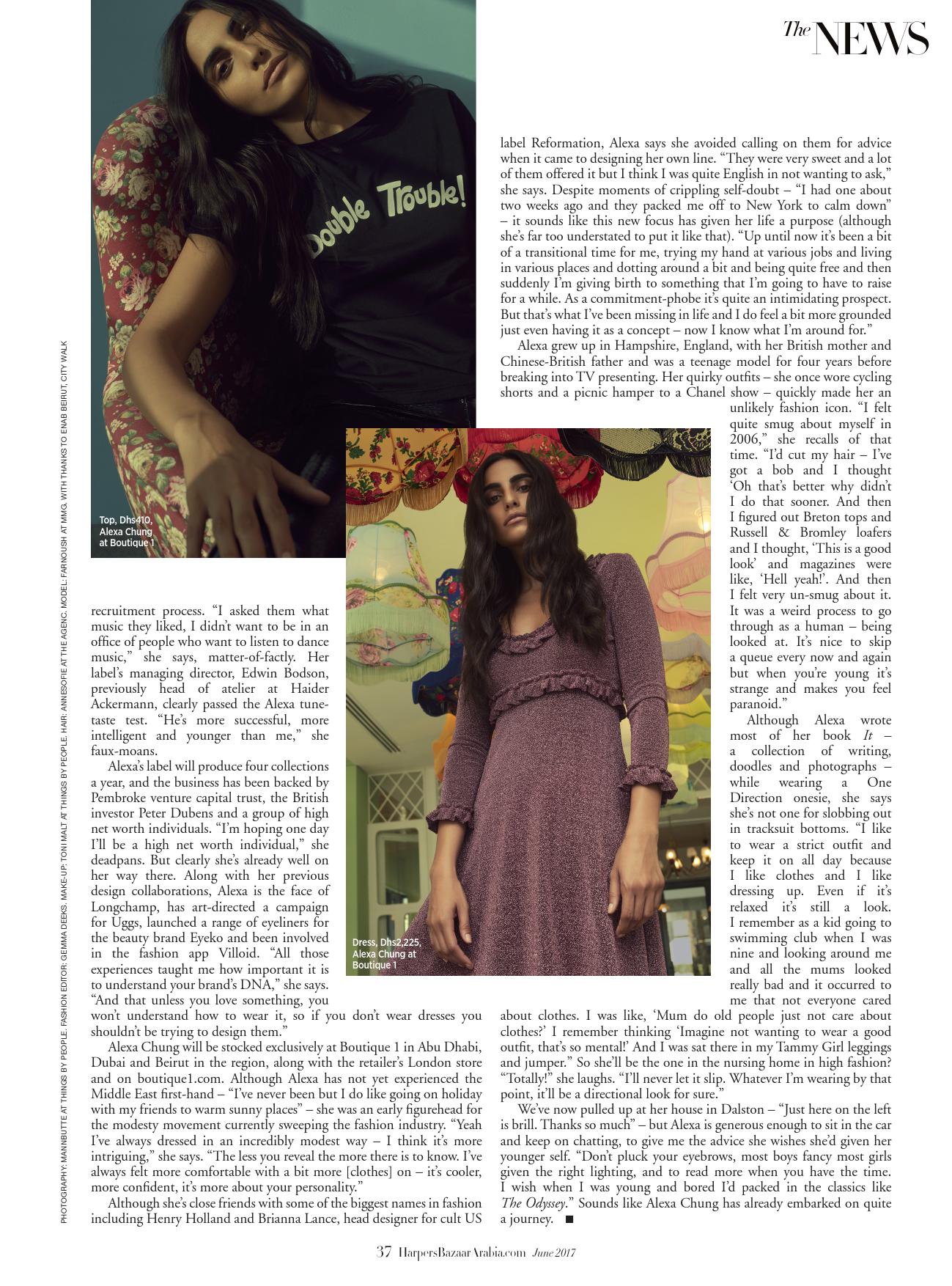 Her unique brand of modest chic has made women around the world want to dress like her, and now Alexa Chung is launching her own clothing line. She tells Kate Wills why it’s taken her so long

Â Alexa Chung is dashing through London in a black cab. “I need an extra large taxi to shove my ego in,” she quips. Our conversation zips along at a faster pace than the rush hour traffic and swerves chaotically from ant powder to losing her passport via American rock band Eagles of Death Metal. She might be a passenger today, but in all other respects Alexa Chung is now firmly in the driving seat. After more than a decade of making women around the world want to dress like her – if you have loafers, a Breton top or a Peter Pan collar in your wardrobe that’ll be the Alexa effect – Chung is bringing out her own clothing line – ALEXACHUNG.

The woman that launched a thousand looks is today looking “very Alexa Chung” in APC jeans, leopard-print boots, a grey-marl t-shirt with the word “Indie” written on it and a Stutterheim jacket which she refers to as “my famous blue raincoat”. It’s only days later that it dawns on me that she’s making a reference to a Leonard Cohen song. That’s just how cool Alexa Chung is. In fact, I feel like I spend most of our interview struggling to keep up. Alexa is laugh-out-loud funny and clearly very smart, although sometimes oddly self-deprecating. “I’m not saying I’m famous” she says at one point and I can’t tell if she’s being sarcastic. She also talks at near-supersonic speeds in a gravelly, husky voice, launching from witty anecdote to comedy accent without drawing breath.

“The idea to launch a label has been percolating for so long it almost became stagnant,” she explains, when we finally get around to talking about ALEXACHUNG the brand. “But as I swung from collaboration to collaboration, I finally built up the strength to give it a shot on my own and finally leap off the vine.” To say it’s much-anticipated is an understatement. The collections she helped design for AG Jeans, Madewell and Marks and Spencer were sell-out smashes. Chung herself has been called “the fashion icon for a generation” and even the Mulberry bag that borrowed her name became an era-defining it-bag (in 2010 it had a waiting list of 9,000). “I definitely feel under pressure to deliver,” she admits. “But I keep telling myself it’s OK to feel overwhelmed and what I feel about it is a billion times more hectic than whether the person in the street may or may not want to invest in a jumper.”

Having seen the first collection, it’s pretty clear that most people will want to invest in owning a piece of ALEXACHUNG. Quite possibly the fluffy rainbow-striped jumper with overly-long sleeves – another Alexa trademark. Fans hoping to buy into her distinctive brand of tomboyish chic won’t be disappointed by the high-waisted denim, prim blouses with pie-crust collars and, yes, dungarees. “About a third of the collection are those staple pieces associated with my style – I thought it would be a bit remiss of me not to indulge that slightly. It would be like being in a band and refusing to play your hit single,” she quips. There are also sweaters with illustrations from her family and friends — “cheap labour” – but Alexa says her favourite piece is the oversize trench coat. “The proportions make it humorous but at the same time it’s elegant and practical and timeless and funny,” she enthuses. “We worked on it from scratch and cut up a lot of fabric and repositioned it. It was one of the first items I saw come back from the factory and I was like ‘Oh wow, that one really worked out!’”

The image of Alexa up to her slender elbows in fabric swatches might seem incongruous, but unlike a lot of celebrities who lend their names to the collections they’ve designed, Chung – who is Creative Director of the label – has clearly been hands-on in the process. At one point I have to interrupt her talking me through Every. Single. Part of a pair of jeans – “the rivets and the pockets and the button-design and the stitching…” She personally hired her team of fourteen people, but had a rather unusual recruitment process. “I asked them what music they liked, I didn’t want to be in an office of people who want to listen to dance music,” she says, matter-of-factly. Her label’s Managing Director, Edwin Bodson, previously Head of Atelier at Haider Ackermann, clearly passed the Alexa music-taste test. “He’s more successful, more intelligent and younger than me,” she faux-moans.

Chung’s label will produce four collections a year, and the business has been backed by Pembroke VCT, Peter Dubens and a group of high net worth individuals. “I’m hoping one day I’ll be a high-net worth individual,” she deadpans. But clearly she’s already well on her way there. Along with her previous design collaborations, Alexa is the face of Longchamps, has art-directed a campaign for Uggs, launched a range of eyeliners for the beauty brand Eyeko and been involved in the fashion app Villoid. “All those experiences taught me how important it is to understand your brand’s DNA,” she says. “And that unless you love something, you won’t understand how to wear it, so if you don’t wear dresses you shouldn’t be trying to design them.”

ALEXACHUNG will launch globally and online, and will be stocked exclusively in Boutique 1 in Dubai. Although Alexa has not yet experienced the Middle East first-hand – “I’ve never been but I do like going on holiday with my friends to warm sunny places” – she was an early figurehead for the modesty movement currently sweeping the fashion industry. “Yeah I’ve always dressed in an incredibly modest way — I think it’s more intriguing,” she says. “The less you reveal the more there is to know. I’ve always felt more comfortable with a bit more [clothes] on — it’s cooler, more confident, it’s more about your personality.”

Although she’s close friends with some of the biggest names in fashion including Henry Holland and Brianna Lance, head designer for cult US label The Reformation, Alexa says she avoided calling on them for advice when it came to designing her own line. “They were very sweet and a lot of them offered it but I think I was quite English in not wanting to ask,” she says. Despite moments of crippling self-doubt – “I had one about two weeks ago and they packed me off to New York to calm down” — it sounds like this new focus has given her life a purpose (although she’s far to understated to put it like that. “Up until now it’s been a bit of a transitional time for me, trying my hand at various jobs and living in various places and dotting around a bit and being quite free and then suddenly I’m giving birth to something that I’m going to have to raise for a while. As a commitment-phobe it’s quite an intimidating prospect. But that’s what I’ve been missing in life and I do feel a bit more grounded just even having it as a concept – now I know what I’m around for.”

Alexa grew up in Hampshire, England with her British mother and Chinese-British father and was a teenage model for four years before breaking into TV presenting. Her quirky outfits — she once wore cycling shorts and a picnic hamper to a Chanel show — quickly made her an unlikely fashion icon. “I felt quite smug about myself in 2006,” she recalls of that time. “I’d cut my hair – I’ve got a bob and I thought ‘Oh that’s better why didn’t I do that sooner. And then I figured out Breton tops and Russell and Bromley loafers and I thought ‘This is a good look’ and magazines were like ‘F*ck yeah!’. And then I felt very un-smug about it. It was a weird process to go through as a human – being looked at. It’s nice to skip a queue every now and again but when you’re young it’s strange and makes you feel more paranoid.”

Although Chung wrote most of her book <It> – a collection of writing, doodles and photographs – while wearing a One Direction onesie, she says she’s not one for slobbing out in tracksuit bottoms. “I like to wear a strict outfit and keep it on all day because I like clothes and I like dressing up. Even if it’s relaxed it’s still a look. I remember as a kid going to swimming club when I was nine and looking around me and all the mums looked really bad and it occurred to me that not everyone cared about clothes. I was like ‘Mum do old people just not care about clothes?’ I remember thinking ‘Imagine not wanting to wear a good outfit, that’s so mental!’ And I was sat there in my Tammy Girl leggings and jumper.” So she’ll be the one in the nursing home in high fashion? “Totally!” she laughs. “I’ll never let it slip. Whatever I’m wearing by that point, it’ll be a directional look for sure.”

We’ve now pulled up at her house in Dalston – “Just here on the left is brill. Thanks so much” — but Alexa is generous enough to sit in the car and keep on chatting, to give me the advice she wishes she’d given her younger self. “Don’t pluck your eyebrows, most boys fancy most girls given the right lighting, and to read more when you have the time. I wish when I was young and bored I’d packed in the classics like The Odyssey.” Sounds like Alexa Chung has already embarked on quite a journey.