I first heard about Polly Hadden-Paton and Vicky Silverthorn during one of the worst mornings of my life. I’d woken up with a hangover of epic proportions to discover that the Isabel Marant jumpsuit I’d borrowed from a friend to wear to a party the night before was now caked in chewing gum all over the crotch area (don’t ask).

In my state of inebriation, I’d thrown said jumpsuit into my freezer – something in the recesses of my mind said this would fix everything. But the gum was now stuck hard and fast and the jumpsuit was also covered in frozen fish-finger crumbs to boot. Tears welled up. I called the only friend I phone in a crisis, who suggested I try a company called ‘You Need a PA’.

At first I baulked at the idea – didn’t PAs book meeting rooms? – but my friend had met Hadden-Paton at a dinner party and assured me she would know just what to do. I fired off a panicked email to Hadden-Paton and a couple of hours later, an elegant man in a cream linen suit called Kareem, from Kynance Dry Cleaners, was at my door picking up the jumpsuit. Fast forward 24 hours, and he was returning one gum-free, good-as-new jumpsuit. It was nothing short of miraculous.

‘That was easy compared to some of the requests we get,’ laughs Hadden-Paton, 28, who is petite and polished, with perfect flicky eyeliner and a mini-dress that could be Mary Katrantzou (but, which she delightedly tells me, is from New Look).

‘Whether it’s a Russian family who want to get their first-born into Eton, or a pop star who wants to throw a Fifty Shades-themed dinner party for 120 people with two days’ notice, no matter what a client asks, we instantly say “Not a problem”, and then find a way to make it happen.’

It’s fair to say this is not your average PA service. Recent jobs have included moving Nick Grimshaw’s entire house for him and chauffeuring Suki Waterhouse out of Burning Man when all the flights were booked up for three days. Oh, and then there was the case of not one – but two – American clients who felt there was a spirit possessing their living room.

And before you picture them googling ‘ghost hunter’, you should know that Silverthorn and Hadden-Paton have a secret weapon at their fingertips. They are part of an elite web of hundreds of London’s top PAs, who share their best contacts on one magic email chain in order to deliver the impossible.

‘If we’ve got a client filming in Outer Mongolia and they need a driver, we’ll put out a message and within seconds someone will reply with exactly the contact you need,’ explains Silverthorn, 36, who’s sleek and charming in black jeans and a simple vest. ‘They’ve saved my bacon so many times. And of course, we all get competitive with each other to see who’s going to be first to find the answer.’

If that sounds like a butler buddy system, akin to the ‘club for gentlemen’s personal gentlemen’ in Jeeves and Wooster or the Society of the Crossed Keys in The Grand Budapest Hotel, that’s because it is. In fact, Wes Anderson’s film is based on a real network of elite hotel concierges, The Society of the Golden Keys.

The dynamic duo won’t reveal the name of their mysterious PA society, despite much begging from me. ‘They’d be inundated with requests if we did,’ says Hadden-Paton, apologetically. ‘You can’t just say “Hey, I want to join!” – you have to be nominated by at least one other member and then approved. All the top celebrity and high net-worth PAs are members. It’s the best of the best. We all meet up around once a month at hotels or clubs and swap stories.’

Although they had different upbringings – Hadden-Paton was a boarder at Sherborne School for Girls in Dorset and Silverthorn went to her local comp in Berkshire – the pair bonded while working as PAs for Lily Allen in the Noughties. Silverthorn fell into PA-ing by chance after working at her local golf club and then becoming a PA to pro golfers, footballers and, eventually, pop stars. Hadden-Paton did a nine-month PA course at Oxford Media & Business School.

They set up ‘You Need a PA’ in 2013 after realising that the demand was out there for a flexible PA service which people could use as and when they needed it. Their clients range from doctors to bloggers to DJs, and tasks include buying forgotten birthday presents (and hand-writing the cards), standing in line for the iPhone 7, securing tickets for sold-out shows and booking bikini waxes and STD tests. If the latter is for a well-known client, Hadden-Paton books appointments under her own name. ‘I’m probably on more sexual-health clinic databases than anyone in London,’ she jokes.

‘People have this image of PAs as secretaries in skirt suits typing away in an office, booking a table at The Ivy,’ says Silverthorn. ‘But we’re not like that. We’re running around London with a backpack on our back, Marigolds and trainers on, getting 10 things done an hour.’ Trainers probably came in handy when one of their girls had to sprint and then hitch-hike 15 miles down the M4 to hand-deliver a green card to a client – an A-list actor – who was waiting at Heathrow Airport and due on set in LA in eight hours.

Hadden-Paton and Silverthorn are so discreet that several of their clients pay them in cash and don’t tell their other halves that they use the service. They will come to your home – or they work remotely out of Hadden-Paton’s flat in Primrose Hill (they have two assistants, Alicia and Milla). There’s no subscription fee or minimum number of hours (unless they’re working on-site, when it’s four hours) and their lack of overheads mean that it’s surprisingly affordable – services start at Â£40 per hour. Often clients will simply email them a to-do list they’ve had for months, and watch in awe as it gets ticked off in a day. Just don’t call them to-do lists. ‘I prefer “action list” now,’ says Silverthorn, who lives in Richmond. ‘It’s so much more positive.’’

It’s an incredibly intimate business, requiring a huge amount of trust. They’ve never even met some of their clients, and yet they have keys to their home and their credit-card details on file. Non-disclosure agreements (NDAs) are regularly signed. Hadden-Paton has even been hired as a rent-a-guest for a clients’ weddings. She turns up in formal attire and mingles, but is also on hand to fix any detail the bridesmaids are too busy/drunk to handle.

While once having a personal assistant was the preserve of celebrities or chief executives, the business of subcontracting the boring parts of your life is now booming. Economists call it comparative advantage: even if you’re brilliant at paperwork or ironing, if you could be spending your time on a more valuable activity, then you should.

Fifteen thousand applications are received by outsourcing service TaskRabbit each month from potential ‘Taskers’ who want to hang up your shelves or design your party invites. Apps such as Laundrapp will do your washing, UberEATS will pick up your kebab at 3am, and Bizzby will send someone for all the other odd jobs you can’t be bothered to do.

Considering the changing nature of the way we work – 4.6 million Brits are now self-employed, including 17.3 per cent of Londoners – and the rise of the gig economy, it was only a matter of time before a pay-as-you-go PA service took off. And virtual butlers won’t be far behind. Amazon recently released the Echo to the UK – a voice-activated personal assistant which will book restaurant tables, put your preferred music on and control your appliances for you. What’s more, Google has come up with Google Home, a smartspeaker that allows you to control the music and lights in your home among other things. But, of course, none of these apps or gadgets can get you tickets to Harry Potter and the Cursed Child.

Disasters do occasionally happen, though. ‘I remember once Lily Allen asked me to get her tickets to the CÃ©line show in Paris,’ recalls Silverthorn. 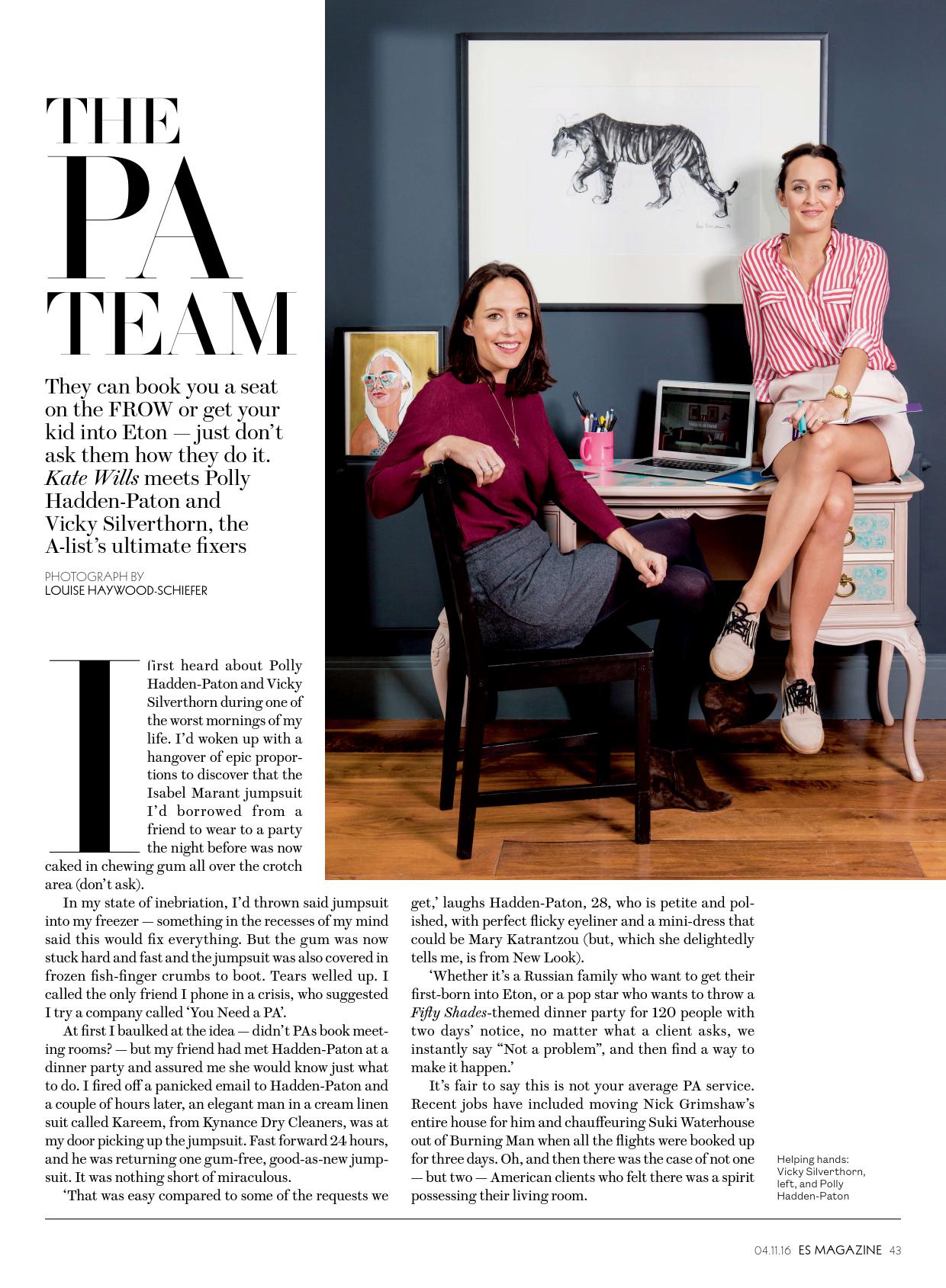 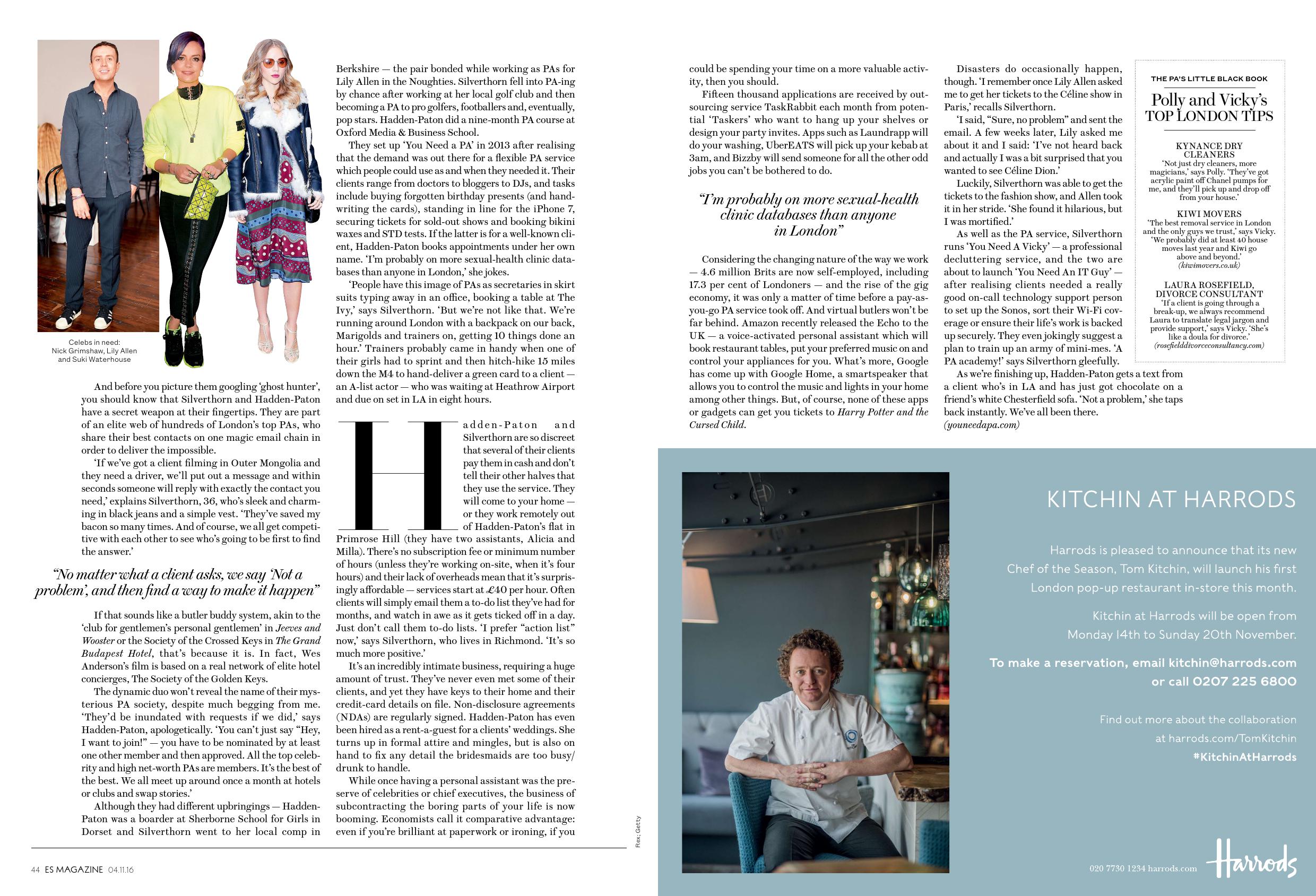 ‘I said, “Sure, no problem” and sent the email. A few weeks later, Lily asked me about it and I said: ‘I’ve not heard back and actually I was a bit surprised that you wanted to see CÃ©line Dion.’

Luckily, Silverthorn was able to get the tickets to the fashion show, and Allen took it in her stride. ‘She found it hilarious, but I was mortified.’

As well as the PA service, Silverthorn runs ‘You Need A Vicky’ – a professional decluttering service, and the two are about to launch ‘You Need An IT Guy’ – after realising clients needed a really good on-call technology support person to set up the Sonos, sort their Wi-Fi coverage or ensure their life’s work is backed up securely. They even jokingly suggest a plan to train up an army of mini-mes. ‘A PA academy!’ says Silverthorn gleefully.

As we’re finishing up, Hadden-Paton gets a text from a client who’s in LA and has just got chocolate on a friend’s white Chesterfield sofa. ‘Not a problem,’ she taps back instantly. We’ve all been there.