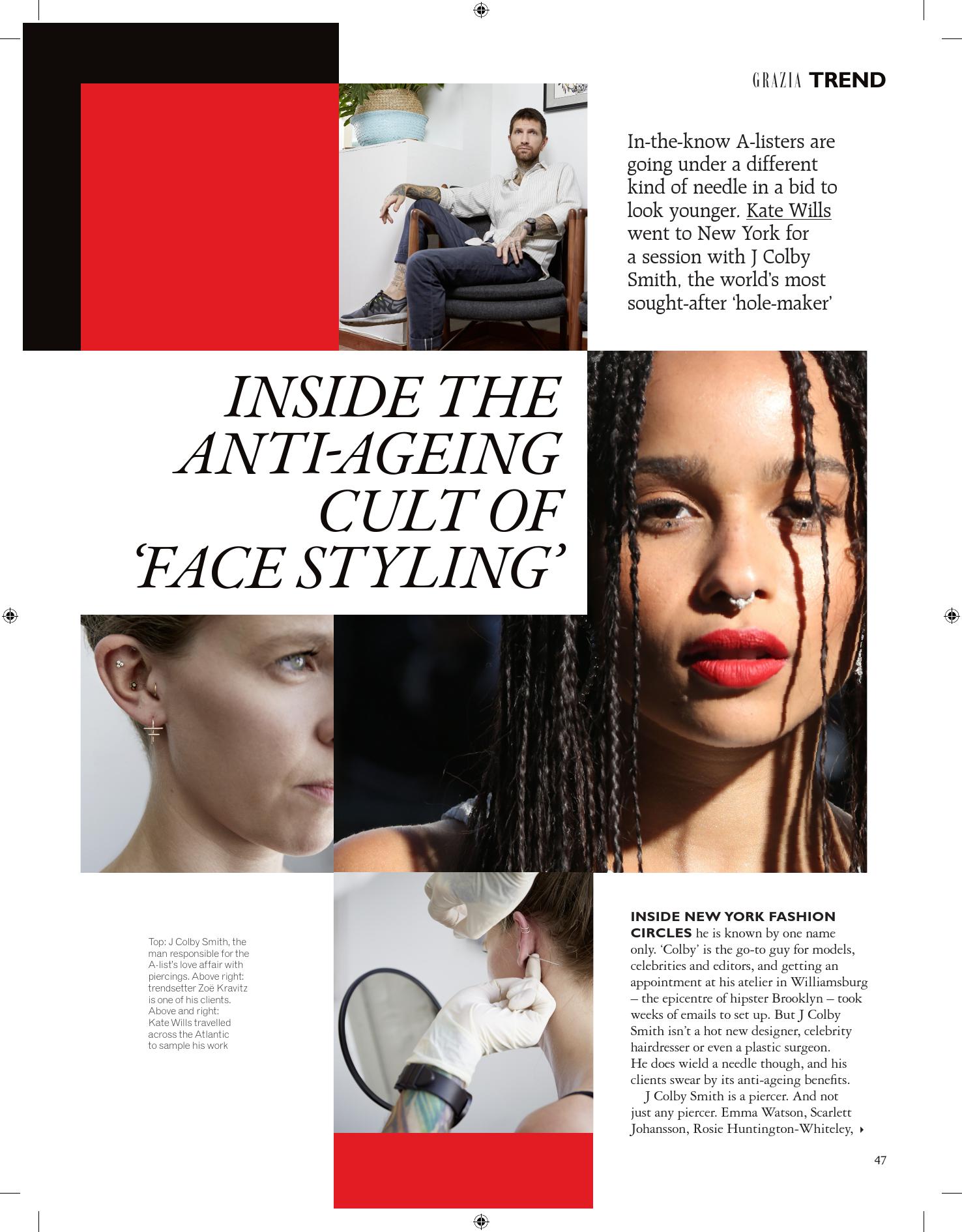 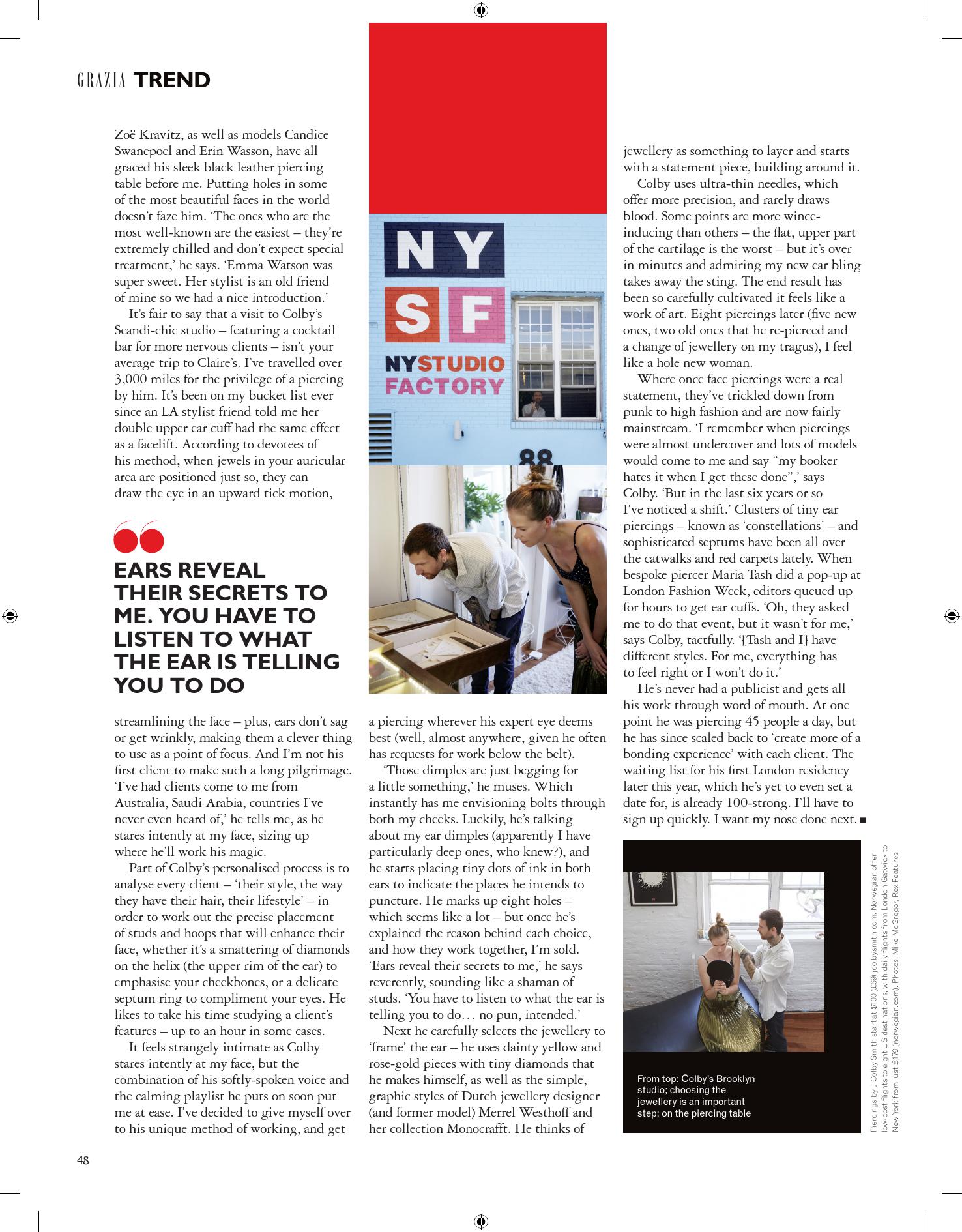 In-the-know A-listers are going under a different kind of needle in a bid to look younger. Kate Wills went to New York for a session with J Colby Smith, the world’s most sought-after ‘hole-maker’

INSIDE NEW YORK FASHION CIRCLES he is known by one name only. ‘Colby’ is the go-to guy for models, celebrities and editors, and getting an appointment at his atelier in Williamsburg — the epicentre of hipster Brooklyn — took weeks of emails to set up. But J Colby Smith isn’t a hot new designer, celebrity hairdresser or even a plastic surgeon. He does wield a needle though, and his clients swear by its anti-ageing benefits. J Colby Smith is a piercer. And not just any piercer. Emma Watson, Scarlett Johansson, Rosie Huntington-WhiteleyÂ ZoÃ« Kravitz, as well as models Candice Swanepoel and Erin Wasson, have all graced his sleek black leather piercing table before me. Putting holes in some of the most beautiful faces in the world doesn’t faze him. ‘The ones who are the most well-known are the easiest — they’re extremely chilled and don’t expect special treatment,’ he says. ‘Emma Watson was super sweet. Her stylist is an old friend of mine so we had a nice introduction.’ It’s fair to say that a visit to Colby’s Scandi-chic studio — featuring a cocktail bar for more nervous clients — isn’t your average trip to Claire’s. I’ve travelled over 3,000 miles for the privilege of a piercing by him. It’s been on my bucket list ever since an LA stylist friend told me her double upper ear cuff had the same effect as a facelift. According to devotees of his method, when jewels in your auricular area are positioned just so, they can draw the eye in an upward tick motion,

According to devotees of his method, when jewels in your auricular area are positioned just so, they can draw the eye in an upward tick motion, streamlining the face — plus, ears don’t sag or get wrinkly, making them a clever thing to use as a point of focus. And I’m not his first client to make such a long pilgrimage. ‘I’ve had clients come to me from Australia, Saudi Arabia, countries I’ve never even heard of,’ he tells me, as he stares intently at my face, sizing up where he’ll work his magic. Part of Colby’s personalised process is to analyse every client — ‘their style, the way they have their hair, their lifestyle’ — in order to work out the precise placement of studs and hoops that will enhance their face, whether it’s a smattering of diamonds on the helix (the upper rim of the ear) to emphasise your cheekbones, or a delicate septum ring to compliment your eyes. He likes to take his time studying a client’s features — up to an hour in some cases.

It feels strangely intimate as Colby stares intently at my face, but the combination of his softly-spoken voice and the calming playlist he puts on soon put me at ease. I’ve decided to give myself over to his unique method of working, and get a piercing wherever his expert eye deems best (well, almost anywhere, given he often has requests for work below the belt). ‘Those dimples are just begging for a little something,’ he muses. Which instantly has me envisioning bolts through both my cheeks. Luckily, he’s talking about my ear dimples (apparently I have particularly deep ones, who knew?), and he starts placing tiny dots of ink in both ears to indicate the places he intends to puncture. He marks up eight holes — which seems like a lot — but once he’s explained the reason behind each choice, and how they work together, I’m sold.

‘Ears reveal their secrets to me,’ he says reverently, sounding like a shaman of studs. ‘You have to listen to what the ear is telling you to do… no pun, intended.’ Next he carefully selects the jewellery to ‘frame’ the ear — he uses dainty yellow and rose-gold pieces with tiny diamonds that he makes himself, as well as the simple, graphic styles of Dutch jewellery designer (and former model) Merrel Westhoff and her collection Monocrafft. He thinks ofÂ jewellery as something to layer and starts with a statement piece, building around it. Colby uses ultra-thin needles, which offer more precision, and rarely draws blood. Some points are more winceinducing than others — the flat, upper part of the cartilage is the worst — but it’s over in minutes and admiring my new ear bling takes away the sting. The end result has been so carefully cultivated it feels like a work of art. Eight piercings later (five new ones, two old ones that he re-pierced and a change of jewellery on my tragus), I feel like a hole new woman.

Where once face piercings were a real statement, they’ve trickled down from punk to high fashion and are now fairly mainstream. ‘I remember when piercings were almost undercover and lots of models would come to me and say “my booker hates it when I get these done”,’ says Colby. ‘But in the last six years or so I’ve noticed a shift.’ Clusters of tiny ear piercings — known as ‘constellations’ — and sophisticated septums have been all over the catwalks and red carpets lately.

When bespoke piercer Maria Tash did a pop-up at London Fashion Week, editors queued up for hours to get ear cuffs. ‘Oh, they asked me to do that event, but it wasn’t for me,’ says Colby, tactfully. ‘[Tash and I] have different styles. For me, everything has to feel right or I won’t do it.’ He’s never had a publicist and gets all his work through word of mouth. At one point he was piercing 45 people a day, but he has since scaled back to ‘create more of a bonding experience’ with each client. The waiting list for his first London residency later this year, which he’s yet to even set a date for, is already 100-strong. I’ll have to sign up quickly. I want my nose done next.

We can be heroes