Is Your Relationship Worth Fighting For? 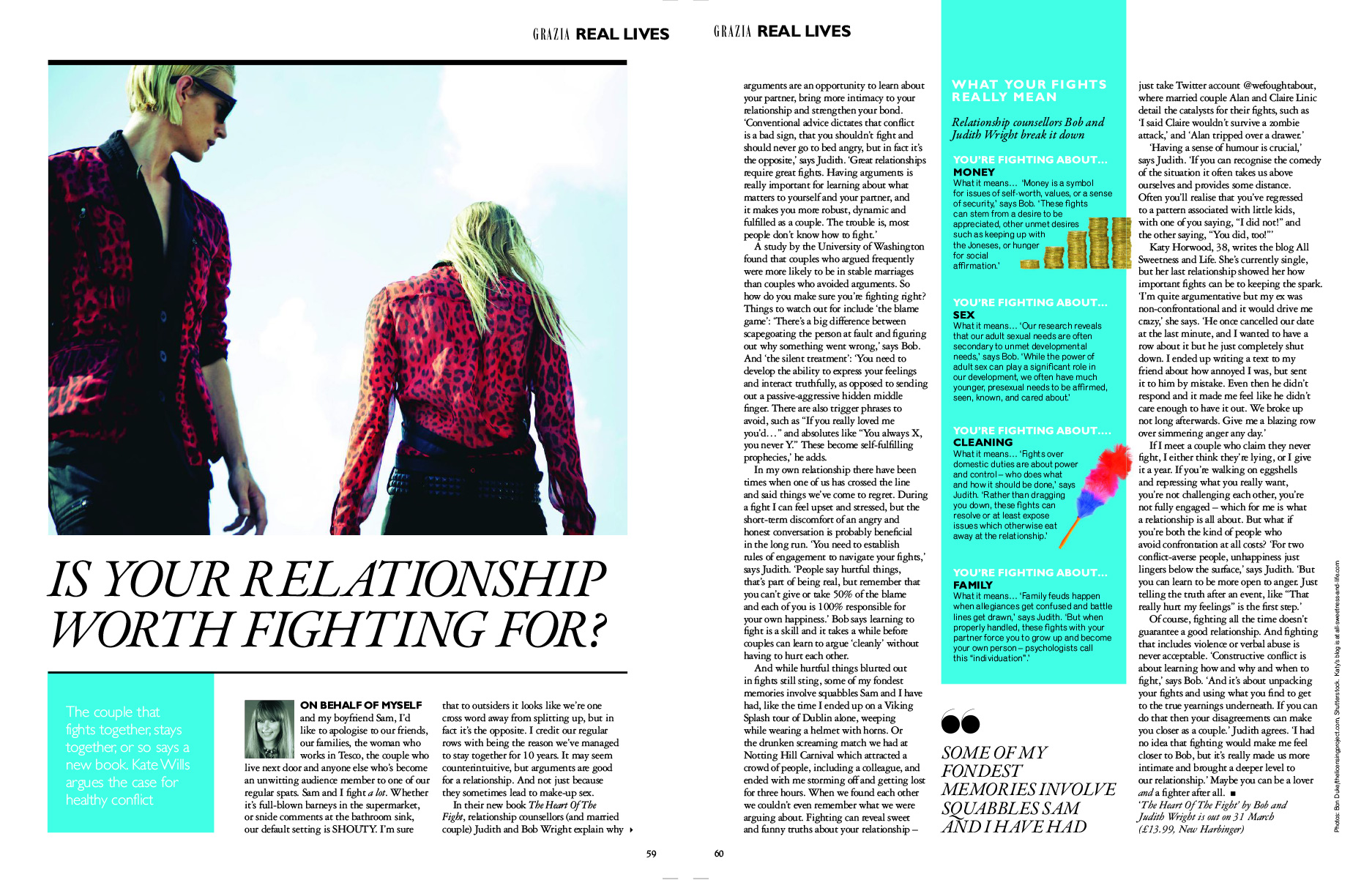 Is your relationship worth fighting for?

Think that regular slanging matches mean your relationship is doomed? According to a new book, the couple that fights together, stays together. Kate Wills reports

On behalf of myself and my boyfriend Sam I’d like to apologise to our friends, our families, the woman who works in Tesco, the couple who live next door and anyone else who’s become an unwitting audience member to one of our regular spats. Me and Sam fight <a lot>. Whether it’s full-blown barneys in the supermarket, or snide comments at the bathroom sink, our default setting is shouty. To outsiders, I’m sure it looks like we’re one cross word away from splitting up, but in fact it’s the opposite. I credit our regular rows with being the reason we’ve managed to stay together for ten years. It may seem counterintuitive, but arguments are good for a relationship. And not just because they sometimes lead to make-up sex.

In their new book The Heart of the Fight, relationship counsellors (and married couple!) Judith and Bob Wright explain why arguments are an opportunity to learn about your partner, bring more intimacy to your relationship and strengthen your bond. “Conventional advice for relationships dictates that conflict is a bad sign, that you shouldn’t fight and should never go to bed angry, but in fact it’s the opposite,” says Judith. “Great relationships require great fights. Having arguments is really important for learning about what matters to yourself and your partner, and it makes you more robust, dynamic and fulfilled as a couple. The trouble is, most people don’t know how to fight.”

A study by the University of Washington found that couples who argued frequently were more likely to be in stable marriages than couples who avoided arguments.

So how do you make sure you’re fighting right? Things to watch out for include ‘The Blame Game’ – “there’s a big difference between scapegoating the person at fault and figuring out why something went wrong,” says Bob, and the silent treatment -“You need to develop the ability to express your feelings and interact truthfully, as opposed to sending out a passive-aggressive hidden middle finger.” There are also trigger phrases to avoid, such as “If you really loved me you’d…” and absolutes like Â “You always X, You never Y”. “These become self-fulfilling prophecies,” he adds.

In my own relationship there have been times when one of us has crossed the line in the heat of the moment and said things we’ve come to regret. During a fight I can feel upset and stressed, but the short-term discomfort of an angry and honest conversation is probably beneficial in the long run. “You need to establish rules of engagement to navigate your fights,” says Judith. “Humans hurtful things, that’s part of being real, but remember that you can’t give or take 50% of the blame and each of you is 100% responsible for your own happiness.” Bob says learning to fight is a skill and it takes a while before couples can learn to argue “cleanly” without having to hurt each other.

And while hurtful things blurted out in fights still sting, some of my fondest memories involve squabbles Sam and I have had, like the time I ended up on a Viking Splash tour of Dublin alone, weeping while wearing a helmet with horns on top. Not my best look. Or the drunken screaming match we had at Notting Hill Carnival which attracted a crowd of people, including a colleague, and ended with me storming off and getting lost for three hours. When we found each other we couldn’t even remember what we were arguing about. Â Fighting can reveal sweet and funny truths about your relationship – just take the Twitter account @wefoughtabout, where married couple Alan and Claire Linic detail the catalysts for their fights, from “I said Claire wouldn’t survive a zombie attack” to “Alan tripped over a drawer”.

“Having a sense of humour is crucial,” says Judith. “If you can recognise the comedy of the situation it often takes us above ourselves and provides some distance. Often you’ll realise that you’ve regressed to a pattern associated with little kids, with one of you saying ‘I did not!’ and the other saying Â ‘You did too!’”

Katy Horwood, 38, from London, works in property and writes the blog Sweetness and Life*. She’s currently single, but her last relationship showed her how important fights can be to keeping the spark. “I’m quite an argumentative person but my ex was totally non-confrontational and it would drive me crazy,” she says. “I remember he once cancelled our date at the last minute, and I wanted to have a row about it but he just completely shut down. I ended up writing a text to my friend about how annoyed I was, but I sent it to him by mistake. Even then he didn’t respond and it made me feel like he didn’t care enough to have it out. We broke up not long afterwards. Give me a blazing row over simmering anger any day.”

If I meet a couple who claim they never fight, I either think they’re lying, or I give it a year. If you’re walking on eggshells and repressing what you really want, you’re not challenging each other, you’re not fully engaged – which for me is what a relationship is all about. But what if you’re both the kind of people who avoid confrontation at all costs? “For two conflict-averse people, unhappiness just lingers below the surface,” says Judith. “But you can learn to be more open to anger, and it doesn’t have to be a full-blown fight. Just being willing to tell the truth after an event, like ‘That really hurt my feelings’ or ‘I didn’t like that’, is the first step.”

Of course, fighting all the time doesn’t guarantee a good relationship. And fighting that includes violence or verbal abuse is never ever acceptable. “Constructive conflict is about learning how and why and when to fight,” says Bob. “And then it’s about unpacking your fights and using what you find to get to the true yearnings underneath. If you can do that then your disagreements can make you closer as a couple.” Judith agrees. “I had no idea that fighting would make me feel closer to Bob, but it’s really made us more intimate and brought a deeper level to our relationship.”

Maybe you can be a lover and a fighter.

What your fights really mean

Relationship counsellors Bob and Judith Wright break it down

What it means… “Money is a symbol for issues of self- worth, values, or a sense of security,” says Bob. “These fights can stem from a desire to be appreciated, other unmet desires such as keeping up with the Joneses, or hunger for social affirmation.”

You’re fighting about…. CLEANING UP

What it means… “Fights over domestic duties are about power and control – who does what and how it should be done,” says Judith. “Rather than dragging you down, these fights can resolve or at least expose issues which otherwise eat away at the relationship.”

What it means… “Our research reveals that our adult sexual needs are often secondary to unmet developmental needs,” says Bob. “While the power of adult sex can play a significant role in our development, we often have much younger, presexual needs to be affirmed, seen, known, and cared about.” Â

You’re fighting about… FAMILY
What it means… “Family feuds happen when allegiances get confused and battle lines get drawn,” says Judith. “But when properly handed, these fights with your partner force you to grow up and become your own person – psychologists call this ‘individuation’.”

Katy’s blog is at all-sweetness-and-life.com