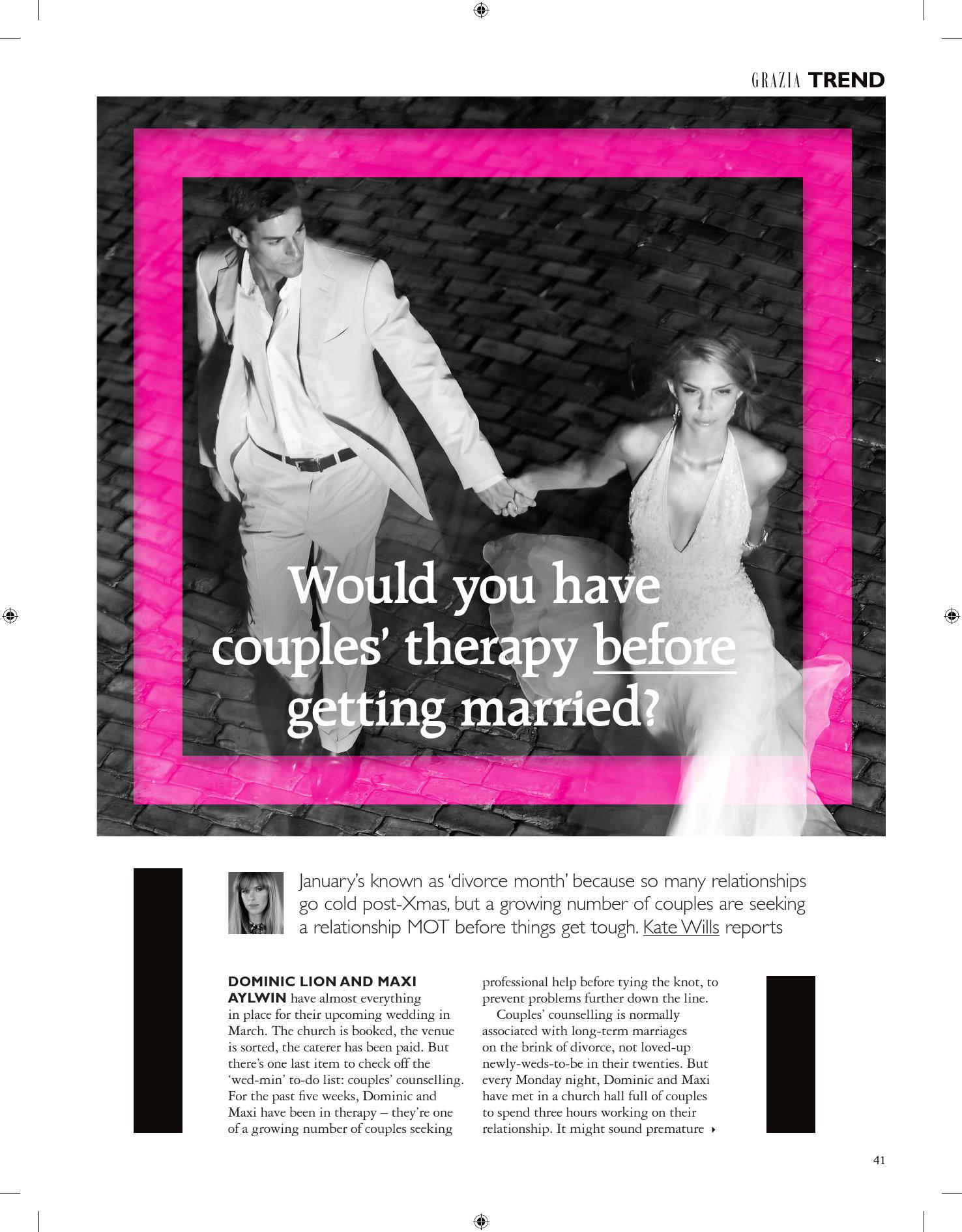 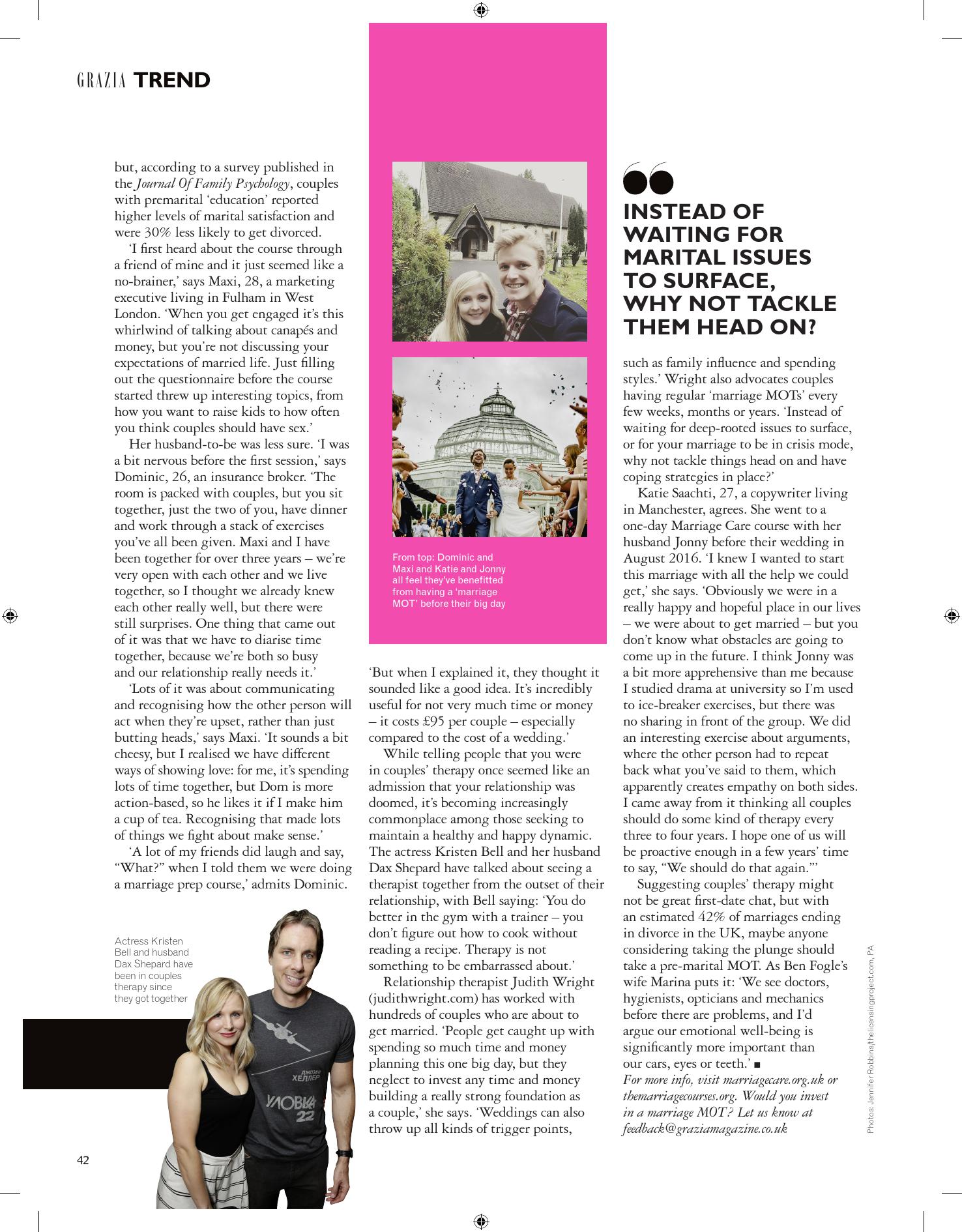 January is nicknamed ‘divorce month’ because so many relationships go cold, but a growing number of couples are seeking therapy way before things get tough. Kate Wills reports

Dominic Lion and Maxi Aylwin have almost everything in place for their upcoming wedding in March. The church is booked, the venue is sorted, the caterer has been paid. But there’s one last item to check off the ‘wed-min’ to-do list: couples counselling. For the last five weeks Dominic and Maxi have been going to marriage preparation classes, one of a growing number of couples who are seeking professional help before marriage.

“I first heard about the course through a friend of mine and it just seemed like a real no-brainer,” says Maxi, 28, a marketing executive living in Fulham west London. “When you get engaged it’s this whirlwind of talking about canapes and money, but you’re not having real conversations about your expectations of married life. Even filling out the questionnaire before the course threw up really interesting topics – from how you want to bring up kids to how often you think couples should have sex.”

Couples counselling is normally associated with long-term marriages on the brink of divorce, not loved-up newly-weds-to-be in their twenties. But every Monday night, Dominic and Maxi have met in a church hall full of couples to spend three hours working on their relationship. It might sound premature, but according to a survey published in the Journal of Family Psychology, couples with premarital education reported higher levels of marital satisfaction and were 30% less likely to get divorced.*

“I was a bit nervous before the first session,” explains Dominic, 26, an insurance broker. “The room is packed with couples but you sit together just the two of you and have dinner and work through a pack of exercises you’ve all been given. Maxi and I have been together for over three years and we’re very open with each other and we live together, so I thought we already knew each other really well but there were still surprises. One thing that came out of it was to diary in time together because we’re both so busy and our relationship really needs that.”

“Lots of it was just about communicating openly and recognising how the other person will act when they’re upset and angry rather than just butting heads,” says Maxi. “But the part about ‘Love Languages’ really resonated with me. It sounds a bit cheesy but I realised we have different ways of showing love, so for me it’s spending lots of time together, but Dom is more action-based, so he likes it if i make him a cup of tea. Recognising that made lots of things we do or fight about make sense.”

“A lot of my friends did laugh and say ‘What?!’ when I told them we were doing a marriage prep course,” admits Dominic. “But when I explained they thought it sounded like really good idea. It’s incredibly useful for not very much money or time – it costs Â£95 per couple – especially compared to the cost of a wedding.”

If you’re getting married in a house of worship you might already be required to attend a faith-based marriage class before you tie the knot. But even if you’re not religious there are now nationwide courses set up to prepare you for marriage. Dominic and Maxi are attending The Marriage Course (themarriagecourses.org), which was set up by the Alpha movement, a branch of the Church of England, but it’s open to all religions. “Dom grew up Christian but I’m not religious,” explains Maxi. “The course isn’t about God, it’s about marriage. It really focuses on the practical aspects of a relationship, rather than being all about spirituality.”

While once telling people that you were in couples therapy seemed like an admission that your relationship was doomed, it’s becoming increasingly commonplace for couples seeking to maintain a healthy and happy dynamic. The actress Kristen Bell and her husband Dax Shepard have talked about seeing a therapist together from the outset of their relationship, with Bell saying: “You do better in the gym with a trainer; you don’t figure out how to cook without reading a recipe. Therapy is not something to be embarrassed about.”** Likewise Ben Fogle’s wife Marina has likened their regular sessions with a counsellor as like “going to the dentist”.***

Relationship therapist Judith Wright (judithwright.com) has worked with hundreds of couples who are about to get married or thinking about putting a ring on it. “People get so caught up with spending so much time and money planning this one big day, but they neglect to invest any time and money building a really strong foundation as a couple,” she says. “Weddings can also throw up all kinds of trigger points, such as family influence and spending styles.” Wright also advocates couples having regular “marriage MOTs” every few weeks, months or years. “Instead of waiting for deep-rooted issues to surface, or for your marriage to be in crisis mode, why not tackle things head on and have coping strategies in place?”

Katie Saachti, 27, a copywriter living in Manchester, agrees. She went to a one-day Marriage Care course (marriagecare.org.uk) with her husband Jonny before their wedding in August 2016. “I knew I wanted to start this marriage with all the help we could get,” she says. “Obviously we were in a really happy and hopeful place in our lives – we were about to get married – but you don’t know what obstacles are going to come up in the future. I think Jonny was a bit more apprehensive than me because I did Drama at university so I’m used to ice-breaker exercises, but there was no sharing in front of the group or airing dirty linen in public. We did a really interesting exercise about arguments, where the other person was forced to repeat back what you’ve said to them, which apparently forces empathy on both sides. I came away from it thinking all couples should do some kind of therapy every three to four years. I hope one of us will be proactive enough in a few years to say ‘We should do that again’.”

Suggesting couples therapy might not be great first-date chat, but with an estimated 42% of marriages ending in divorce in the UK, maybe we could all use a marriage MOT. As Marina Fogle puts it: “We see doctors, hygienists, opticians and mechanics before there are problems, and I’d argue our emotional wellbeing is significantly more important than our cars, eyes or teeth.”