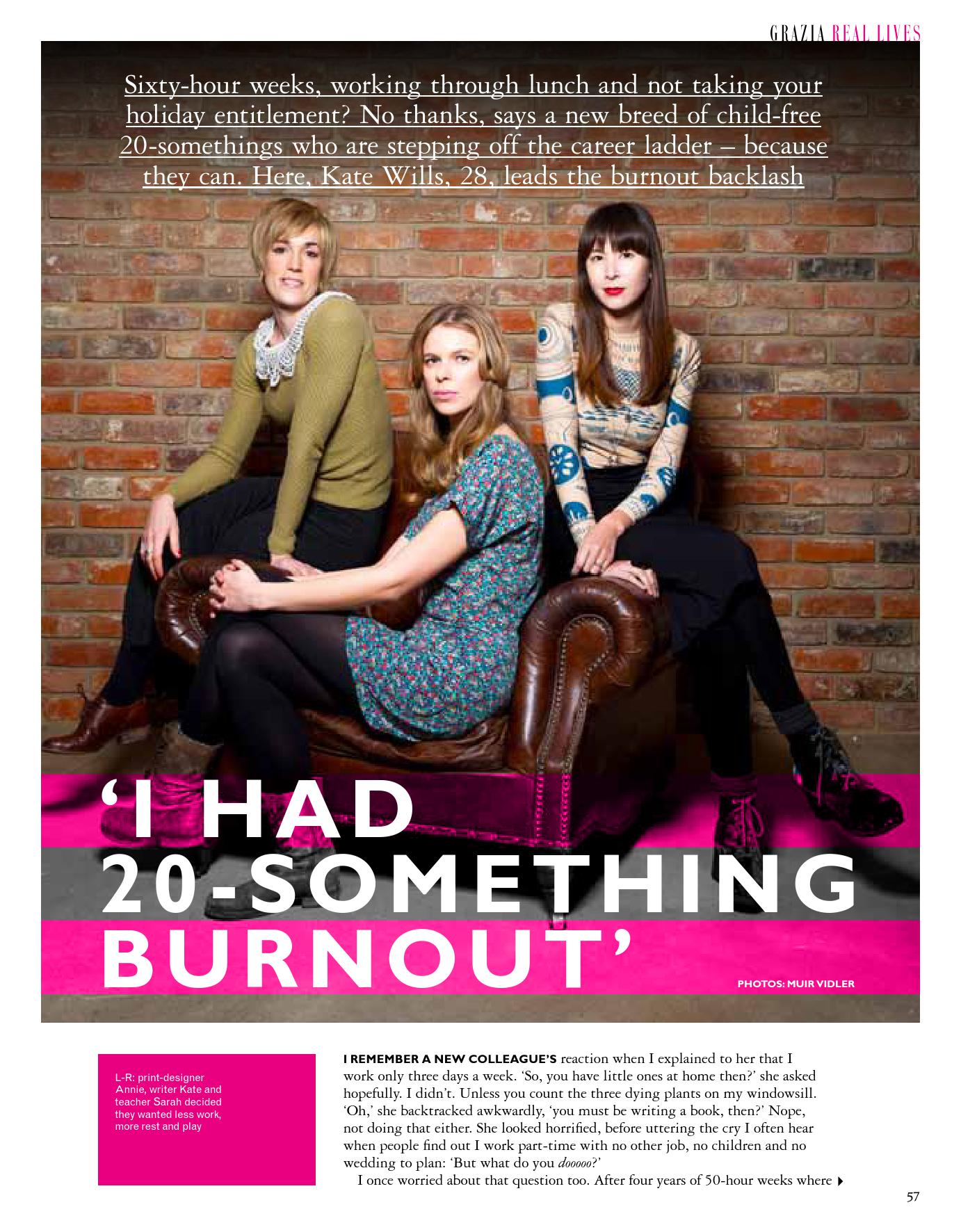 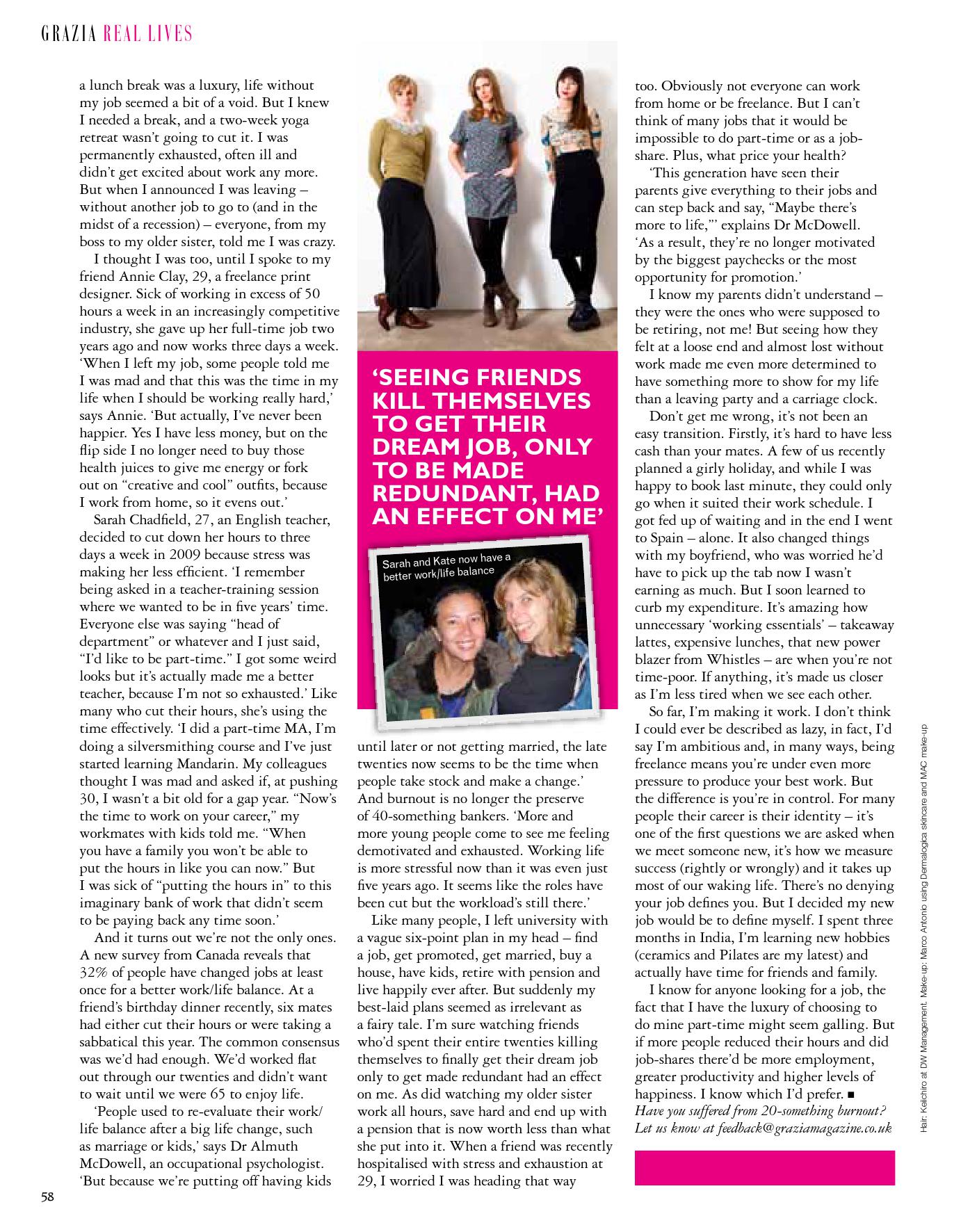 Sixty-hour weeks, working through lunch and not taking yourÂ holiday entitlement? No thanks, says a new breed of child-free 20-somethings who are stepping off the career ladder

I remember a new colleague’s reaction when I explained to her that I work only three days a week. ‘So, you have little ones at home then?’ she asked hopefully. I didn’t. Unless you count the three dying plants on my windowsill. ‘Oh,’ she backtracked awkwardly, ‘you must be writing a book, then?’ Nope, not doing that either. She looked horrified, before uttering the cry I often hear when people find out I work part-time with no other job, no children and no wedding to plan: ‘But what do you dooooo?’ I once worried about that question too. After four years of 50-hour weeks whereÂ a lunch break was a luxury, life without my job seemed a bit of a void. But I knew I needed a break, and a two-week yoga retreat wasn’t going to cut it. I was permanently exhausted, often ill and didn’t get excited about work any more. But when I announced I was leaving — without another job to go to (and in the midst of a recession) — everyone, from my boss to my older sister, told me I was crazy.

I thought I was too, until I spoke to my friend Annie Clay, 29, a freelance print designer. Sick of working in excess of 50 hours a week in an increasingly competitive industry, she gave up her full-time job two years ago and now works three days a week. ‘When I left my job, some people told me

I was mad and that this was the time in my life when I should be working really hard,’ says Annie. ‘But actually, I’ve never been happier. Yes I have less money, but on the flip side I no longer need to buy those health juices to give me energy or fork

out on “creative and cool” outfits, because I work from home, so it evens out.’

Sarah Chadfield, 27, an English teacher, decided to cut down her hours to three days a week in 2009 because stress was making her less efficient. ‘I remember being asked in a teacher-training session where we wanted to be in five years’ time. Everyone else was saying “head of department” or whatever and I just said, “I’d like to be part-time.” I got some weird looks but it’s actually made me a better teacher, because I’m not so exhausted.’ Like many who cut their hours, she’s using the time effectively. ‘I did a part-time MA, I’m doing a silversmithing course and I’ve just started learning Mandarin. My colleagues thought I was mad and asked if, at pushing 30, I wasn’t a bit old for a gap year. “Now’s the time to work on your career,” my workmates with kids told me. “WhenÂ you have a family you won’t be able to put the hours in like you can now.” ButÂ I was sick of “putting the hours in” to this imaginary bank of work that didn’t seem to be paying back any time soon.’

And it turns out we’re not the only ones. A new survey from Canada reveals that 32% of people have changed jobs at least once for a better work/life balance. At a friend’s birthday dinner recently, six mates had either cut their hours or were taking a sabbatical this year. The common consensus was we’d had enough. We’d worked flat out through our twenties and didn’t want to wait until we were 65 to enjoy life.

‘People used to re-evaluate their work/ life balance after a big life change, suchÂ as marriage or kids,’ says Dr Almuth McDowell, an occupational psychologist. ‘But because we’re putting off having kids until later or not getting married, the late twenties now seems to be the time when people take stock and make a change.’ And burnout is no longer the preserve of 40-something bankers. ‘More and more young people come to see me feeling demotivated and exhausted. Working life is more stressful now than it was even just five years ago. It seems like the roles have been cut but the workload’s still there.’

Like many people, I left university with a vague six-point plan in my head — findÂ a job, get promoted, get married, buy a house, have kids, retire with pension and live happily ever after. But suddenly my best-laid plans seemed as irrelevant asÂ a fairy tale. I’m sure watching friends who’d spent their entire twenties killing themselves to finally get their dream job only to get made redundant had an effect on me. As did watching my older sister work all hours, save hard and end up with a pension that is now worth less than what she put into it. When a friend was recently hospitalised with stress and exhaustion at 29, I worried I was heading that way too. Obviously not everyone can work from home or be freelance. But I can’t think of many jobs that it would be impossible to do part-time or as a job- share. Plus, what price your health?

‘This generation have seen their parents give everything to their jobs and can step back and say, “Maybe there’s more to life,”’ explains Dr McDowell. ‘As a result, they’re no longer motivated by the biggest paychecks or the most opportunity for promotion.’

I know my parents didn’t understand — they were the ones who were supposed to be retiring, not me! But seeing how they felt at a loose end and almost lost without work made me even more determined to have something more to show for my life than a leaving party and a carriage clock.

Don’t get me wrong, it’s not been an easy transition. Firstly, it’s hard to have less cash than your mates. A few of us recently planned a girly holiday, and while I was happy to book last minute, they could only go when it suited their work schedule. I got fed up of waiting and in the end I went to Spain — alone. It also changed things with my boyfriend, who was worried he’d have to pick up the tab now I wasn’t earning as much. But I soon learned to curb my expenditure. It’s amazing how unnecessary ‘working essentials’ — takeaway lattes, expensive lunches, that new power blazer from Whistles — are when you’re not time-poor. If anything, it’s made us closer as I’m less tired when we see each other.

So far, I’m making it work. I don’t think I could ever be described as lazy, in fact, I’d say I’m ambitious and, in many ways, being freelance means you’re under even more pressure to produce your best work. But the difference is you’re in control. For many people their career is their identity — it’s one of the first questions we are asked when we meet someone new, it’s how we measure success (rightly or wrongly) and it takes up most of our waking life. There’s no denying your job defines you. But I decided my new job would be to define myself. I spent three months in India, I’m learning new hobbies (ceramics and Pilates are my latest) and actually have time for friends and family.

I know for anyone looking for a job, the fact that I have the luxury of choosing to do mine part-time might seem galling. But if more people reduced their hours and did job-shares there’d be more employment, greater productivity and higher levels of happiness. I know which I’d prefer.