The clichÃ© of a TV talent show changing contestants’ lives has become as common as a Great British Bake Off soggy bottom.

But for Nadiya, 31, the world post-Bake-Off is looking very different indeed.

Just 12 months ago she was a stay-at-home mum in Leeds, her days consisting of “school run, packed lunches, after-school activities, dinner, bedtime” on repeat.

Fast-forward to today and she’s walking the BAFTA red carpet and making a 90th birthday cake for the Queen. Yes, the Queen.

Thankfully, despite her starry new lifestyle, Nadiya is still sweet and self-effacing.

Not only did she get the train to our Fabulous shoot, but the tiny star (she’s a miniature 4ft 11in) is yet to feel comfortable in front of the camera.

We catch a glimpse of one of her famous raised eyebrows when our photographer asks her to pull some silly poses.

But don’t expect a diva strop.

She’s so super-polite that she even insists a 30-minute-old (and stone-cold) cup of tea is “delicious”.

It’s no wonder that her tent triumph last October — watched by 15 million people — catapulted her from ordinary life to national treasure status.

As an Asian Muslim woman in a headscarf, she has also found herself becoming a figurehead for multicultural Britain.

Now she regularly appears on Loose Women, is bringing out her first cookbook Nadiya’s Kitchen this Thursday (with another one for kids in the pipeline), has made her own TV show — the brilliantly named The Chronicles of Nadiya — and is writing a novel.

Do you still find cooking fun after winning GBBO?

Oh, yeah. Cooking has always been a therapy for me. As a stay-at-home mum, you need something to take you away from life sometimes. But these days I’m trying to be a bit clever about it and do big pots of things and put them in the freezer. I’m never going to get my husband [Abdal, 34] cooking. He’s still dreadful!

What have you splashed out on since the show?

Our new house in Milton Keynes has two kitchens! And I’m going to buy Abdal a car. He wants a Range Rover with tinted windows — a man car.

What do your three kids make of your fame?

My nine year old [son Musa] is slightly territorial and very protective of me, so he doesn’t understand why people need to stop me constantly when we’re out. But my daughter [Maryam, five] thinks it’s great. Somebody putting make-up on you is every little girl’s dream, so she’s like: “My mum’s the best!”

Is it hard to juggle your schedule with being a mum?
I’m not going to lie and say it’s easy. We have made some big changes in our life over the last six months. We’ve moved out of Leeds and away from our in-laws to a new town with no friends, so I can be nearer London for work. It wasn’t easy, so I have struggled to find my feet. But I’m at my best when I’m with my family, and we’ve done that struggle together.

You must be a big hit when the school cake sale comes around?

It’s funny because before the show, I always went over the top with what I made, and then I’d have to jiggle the Tupperware to make them look a bit mismatched, as other mums were just buying cupcakes from Greggs. But now if I did that, everyone would say: “How did you win?” They want showstoppers now!

Where’s the weirdest place you’ve been asked for a selfie?
I was at a shopping centre in east London and a girl followed me into the loos. When I came out she was waiting outside the cubicle. I was like: “Can I wash my hands or would you like my germs, too?”

Are there things you miss about your old life?

I miss the amount of time I used to spend with my kids. I think I took it for granted slightly. I’ve gone from being at home with them all day every day to getting text messages [from Abdal] saying: “I think someone’s feeling a little bit poorly” and I want to be there for them, but I can’t. So it’s hard.

Do you want any more kids? Jamie Oliver and Gordon Ramsay are on their fifth…

[Interrupts] No! You don’t need to finish that sentence. I’m not planning any more, so no thanks!

How did Abdal feel about all of the attention he got for being a hottie after he appeared on Bake Off?

He was really shocked and said: “Are they blind? I’m ugly!” and I told him: “Now you’re fishing for compliments — you’re not that bad!” Then he started enjoying it and he’d go on Twitter and shout: “Check this out… this lady is under 30!” There were offers and lots of women making crude comments. People are very, erm, creative.

Has anyone tried to sign up the two of you as a duo?
No, they haven’t actually. He’d be up for it, though — it would be nice for him to spend some time with me!

Do you still speak to Paul Hollywood and Mary Berry?

I’ve got their numbers, so if I’m unsure about something or just want to say hello I’ll call them. Mel [Giedroyc] and Sue [Perkins] send me texts and they’re always funny.

Do you feel like you are representing the Muslim community?

Probably. Did I mean to? Absolutely not. I didn’t go on Bake Off to represent anyone, I just wanted to get my confidence back and that was it. But of course it makes me proud when people say I’ve been a positive influence. I met a Muslim man yesterday and he said his grandad told him: “I’ve been in this country since 1962, but this little girl goes on a baking show and makes us mainstream!” That was really nice.

What do you think of Sadiq Khan becoming the first Muslim mayor of London?
I think it’s great. Do I care that he’s a Muslim? No. London needed a mayor and they got one. I’m not into politics — I barely go and vote.

So we’re guessing you don’t have a view on Donald Trump banning Muslims from the US?

You’ve made the Queen’s birthday cake — which other celebs would you like to bake for?

David Attenborough. I’d love to see if he actually speaks in his wildlife voice all the time.

Books, TV, baking… What else is on the agenda?

I’d love to do a fashion range. I make my own face scrubs from sugar and coconut oil, so maybe a beauty range. I’m just winging it, so I’ll seeÂ what happens. Every day at the moment is a pinch-myself day. 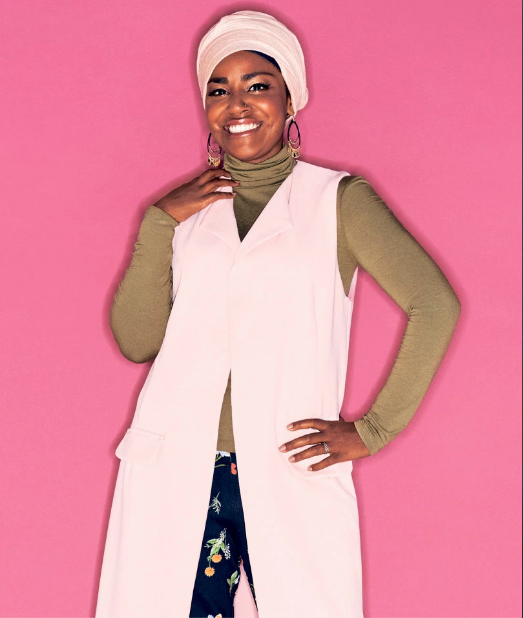