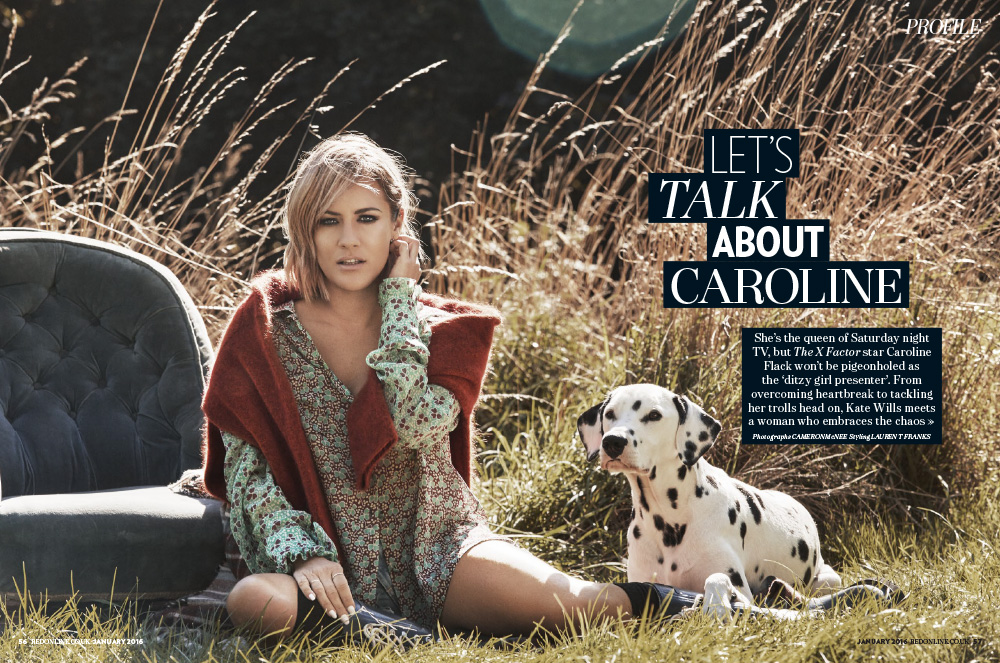 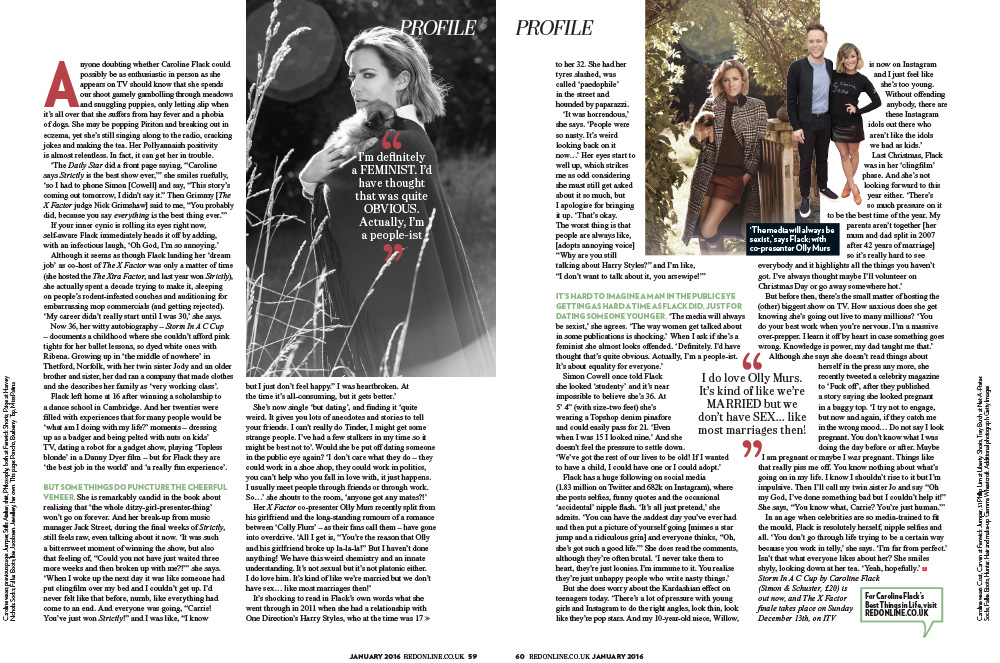 We need to talk about Caroline

She’s the queen of Saturday night TV, having finally landed the coveted X Factor gig. But Caroline Flack refuses to be pigeonholed as the “ditzy girl presenter”. From overcoming heartbreak to tackling her trolls head on, Kate Wills meets one celebrity who embraces the chaos

Anyone doubting whether Caroline Flack could possibly be as enthusiastic in person as she appears on TV should know that she spends our shoot gamely gamboling through meadows and snuggling puppies, only letting slip when it’s all over that she suffers from hayfever and a phobia of dogs (yes, really). She may be popping Piriton and breaking out in eczema, yet she’s still singing along to the radio, cracking jokes, letting rip with her distinctive laugh and putting on funny accents. Her Pollyannaish positivity is almost relentless.

“That’s what Grimmy said to me,“ she says, sipping a cup of tea she insisted on making herself. “The Daily Star did a front page saying ‘Caroline says Strictly is the best show ever’ so I had to phone Simon [Cowell] up and say ‘This story’s coming out tomorrow, I didn’t say it’. And Grimmy went ‘Well you would’ve said ‘Oh yeah, it’s the best show ever’ because you say everything is the best thing ever.’ That’s just what I do. I’ll be like ‘this is the best cup of tea I’ve ever had!’ Oh my god I’m so annoying!” Cue more infectious giggling.

Although it seems as though Flack landing her “dream job” as co-host of The X-Factor was only a matter of time (she hosted the I’m A Celebrity spin-off show, then The Xtra Factor, and last year won Strictly), she actually spent a decade desperately trying to make it, sleeping on people’s rodent-infested couches and auditioning for embarrassing mop commercials (and getting rejected). “My career didn’t really start until I was 30,’ she says. ‘It wasn’t until I got ‘The Jungle’ that I felt like I was a TV presenter.”

Her witty autobiography – Storm In A C-Cup – documents a childhood where she couldn’t afford pink tights for her ballet lessons, so dyed white ones with Ribena. Growing up in “the middle of nowhere” in Thetford, Norfolk, with her twin sister Jody and an older brother and sister, her dad ran a company that made clothes and she describes her family as “very working class”. Flack left home at 16 after winning a scholarship to a dance school in Cambridge and after years of “getting down to the last two” for parts in Cats, Starlight Express and Nutella commercials, her sister Jody made her a presenting showreel and she begged John Noel (Russell Brand’s agent) to take her on.

Her twenties were filled with experiences that for many people would be ‘what am I doing with my life?’ moments – dressing up as a badger and being pelted with nuts on kids’ TV, dating a robot for a gadget show, playing “Topless Blonde” in a Danny Dyer film – but for Caroline they are “the best job in the world”, “completely brilliant” and “a really fun experience”.

But some things do puncture the cheerful veneer. She is remarkably candid in the book about realising that “the whole ditzy-girl-presenter-thing” won’t go on forever. And her breakup from music manager Jack Street, during the final weeks of Strictly, still feels raw even talking about it now. “It was such a bittersweet moment of winning the show, but also that feeling of ‘Could you not have just waited three more weeks and then broken up with me?!’” she says. “When I woke up the next day it was like someone had put clingfilm over my bed and I couldn’t get up. It was the greyest day of the year as well. I’d never felt like that before, numb, like everything had come to end. And everyone was going ‘Carrie! You’ve just won Strictly!” and I was like ‘I know but I just don’t feel happy.’ I was heartbroken. At the time it’s all-consuming, but it gets better.”

She’s now single “but dating”, and finding it “quite weird”. “It gives you lots of anecdotes and stories to tell your friends. Dinners can be quite intense but if you go to the cinema you don’t talk. I can’t really do Tinder, I might get some strange people. I’ve had a few stalkers in my time so it might be best not to.” Would she be put off dating someone in the public eye again? “I don’t care what they do – they could work in a shoe shop, they could work in politics, you can’t help who you fall in love with, it just happens. I usually meet people through friends or through work. So… anyone got any mates?!” she shouts to the room.

Her X Factor co-presenter Olly Murs recently split from his girlfriend and the long-standing rumours of a romance between ‘Colly Flurs’ – as their fans call them – have gone into overdrive. “All I get is ‘You’re the reason that Olly and his girlfriend broke up la-la-la!’ But I haven’t done anything! We have this weird chemistry and an innate understanding. It’s not sexual but it’s not platonic either. It’s like we’re stepbrother and stepsister and we fancy each other a bit. I do love him. It’s kind of like we’re married but we don’t have sex….like most marriages then!”

It’s shocking to read in Flack’s own words what she went through in 2011 when she had a relationship with One Direction’s Harry Styles, who at the time was 17 to her 32. She had her tyres slashed, was called “paedophile” and “pervert” in the street, was hounded by paparazzi and offered a million pounds to be the face of the website cougar.com. “It was horrendous,” she says. “It was really scary time of my life. People were so horrible and nasty. It’s weird looking back on it now…” Her eyes start to well up, which strikes me as odd considering she must still get asked about it so much, but I apologise for bringing it up. “That’s OK. The worst thing is that people are always like [adopts annoying voice] ‘Why are you still talking about Harry Styles?’ and I’m like ‘I don’t want to talk about it you arsewipe!’ That’s a good word. I’m bringing arsewipe back.”

It’s hard to imagine a man in the public eye getting as hard a time as Flack did, just for dating someone younger. “I think the media will always be sexist”, she agrees. “The way women get talked about in some publications is shocking. But it is changing and there are a lot of strong women who work in TV. It’s very supportive, women helping other women.” When I ask if she’s a feminist she almost looks offended. “Definitely. I’d have thought that’s quite obvious. Actually, I’m a people-ist. It’s about equality for everyone.”

Simon Cowell once told Flack she looked “studenty” and it’s near impossible to believe she’s 36. At 5ft 4” (with size two feet) she’s wearing a Topshop denim pinafore and could easily pass for 21. “I’m quite young spirited. Even when I was 15 I looked 9.” And she doesn’t feel the pressure to settle down. “If anything I feel like I’m getting younger – we’ve got the rest of our lives to be old! If I wanted to have a child, then I could have one or I could adopt.”

Flack has a huge following on social media (1.83million on Twitter and 662k on Instagram) where she posts pictures of sunbathing selfies, funny quotes and the occasional ‘accidental’ nipple flash. “It’s all just pretend,” she admits. “You can have the saddest day you’ve ever had and then put a picture of yourself going [mimes a star jump and a ridiculous grin] and everyone thinks ‘Oh she’s got such a good life’” Is she strategic about what she posts? “Never! I always just do it and then think ‘Uh-oh maybe I shouldn’t have written that’.” She does read the comments, although they’re often brutal. “I never take them to heart, they’re just loonies. I’m immune to it. You realise they’re just unhappy people who write nasty things.”

But she does worry about the Kardashian effect on teenagers today. “I think there’s a lot of pressure with young girls and Instagram to do the right angles, look thin, look like they’re pop stars. And my 10 year old niece, Willow, is now on Instagram and I just feel like she’s too young. Without offending anybody, there are these Instagram idols out there who aren’t like the idols we had as kids.”

Last Christmas Flack was in her “clingfilm” phase. And she’s not looking forward to this year either. “There’s so much pressure on it to be the best time of the year. My parents aren’t together [her mum and dad split in 2007 after 42 years of marriage] so it’s really hard to see everybody and it highlights all the things you haven’t got. I’ve always thought maybe I’ll volunteer on Christmas day or go away somewhere hot.”

But before then, there’s the small matter of hosting (the other) biggest show on TV. How anxious does she get knowing she’s going out live to many millions? “You do your best work when you’re nervous. I’m a massive over-prepper. I learn it off by heart in case something goes wrong. Knowledge is power, my dad taught me that.”

Although she says she doesn’t read things about herself in the press anymore, she recently tweeted a celebrity magazine to “F**k off”, after they published a story saying she looked pregnant in a baggy top. “I try not to engage, but now and again, if they catch me in the wrong mood… Do not say I look pregnant. You don’t know what I was doing the day before or the day after that. Maybe I am pregnant or maybe I was pregnant. Things like that really piss me off. You know nothing about what’s going on in my life. I know I shouldn’t rise to it but I’m impulsive. Then I’ll call my twin sister Jo and say ‘Oh my god I’ve done something bad but I couldn’t help it!’ She says ‘You know what, Carrie? You’re just human’.”

In an age when celebrities are so media-trained to fit the mould, Flack is resolutely herself, nipple selfies and all. “You don’t go through life trying to be a certain way because you work in telly,” she says. “I’m far from perfect.” Isn’t that what everyone likes about her? She smiles shyly, looking down at her tea. “Yeah, hopefully”.