Ett Hem in Swedish (and comedy posh voice) means “at home”. While many luxury hotels now try to ape a homely atmosphere, Ett Hem takes this concept to new heights, encouraging guests to rummage in the fridge if they’re peckish or help themselves to books from the extensive library. This is the kind of hotel where you start saying things like “Maybe there’s not that much to see in Stockholm anyway” as you flop into an armchair, pouring yourself another gin and fresh lemon juice from the bar in the lounge.

This spindly, red-brick Art Nouveau townhouse looks like something out of the Lemony Snicket books, and was converted from a private residence in 2012. But with just 12 rooms and a marble hammam under its patina roof this could easily be an incredibly stylish (and massively loaded) friend’s house. Thanks to British interior designer Isle Crawford, there’s not a sheepskin rug or signature scented candle out of place. But it never feels formal.

In a country that’s known for its sense of style (that hateful phrase “Scandi-chic” gets bandied about for a reason), Ett Hem is like stepping into the pages of one of the glossy interiors magazines the hotel has artfully scattered around. But it’s the small touches — like the Kiehl’s products and the hand-drawn map in your room in case you want to go jogging — that raise this from five-star to “I’m never leaving”.

Despite checking in at a distinctly-past-lunch-o-clock 3pm, the chef rustles up some simple but delicious fare in his open kitchen. Pan-fried steak and celeriac with herb mayonnaise is served “family-style” in the conservatory (at the rather un-family price of Â£70). Thankfully, breakfast is included in the room rate, and you can choose whether you tuck into your fresh berries, still-warm bread, eggs, cheese and ham in your bedroom or in one of the many nooks around the house. 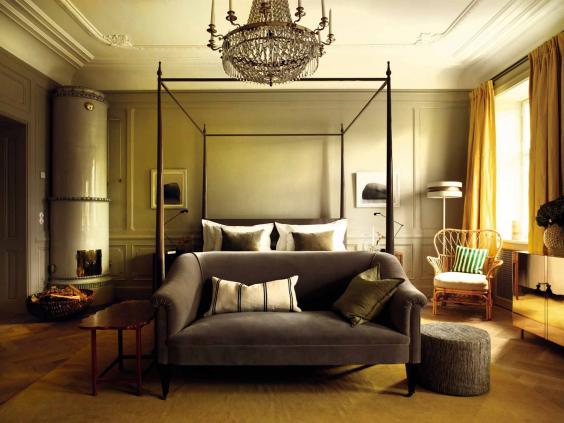 The concierge, Johan, could be from Swedish Central Casting, with his ice-blond quiff and impeccable black suit. His two restaurant recommendations are real highlights. Oaxen Slip is the less formal sister of the two Michelin-starred Oaxen Krog, in a converted shipyard on the “museum island” of Djurgarden, while Rakultur is a small, buzzy Japanese-Swedish fusion place serving tiny plates of herring tartare and seaweed pancakes.

Larkstan district — a quiet, elegant area flanked by embassies and leafy parks — may not feel very central, but Stockholm is small and easy to navigate. You could walk into the city centre in 20 minutes, or the Tekniska HÃ¶gskolan underground station is a five minute stroll.

Nothing seems to be more than 15 minutes away: Gamla Stan, the old town; Fotografiska photography museum, housed in a former customs building on the water; and the arty Sodermalm district, where you’ll find Acne studios and lots of cool design shops. To really get a sense of this city it is worth seeing it from the water, and a guided tour of the archipelago while sipping hot glogg (mulled wine) is just about worth leaving your room for.

The bedrooms are elegantly kitted out, with iPads to control your Sonos sound system. My junior suite had a wood-burning stove, a freestanding bath and a wooden toilet that felt like a Tudor throne. But even the basic doubles are luxurious, with slippers, robes and king-size beds. The deluxe rooms have individual touches such as antique writing desks but, if you really want to make yourself at home, the largest suite takes up an entire floor, including your own dining room. Just in case you want to invite some friends over for supper.

The World Is Not Enough