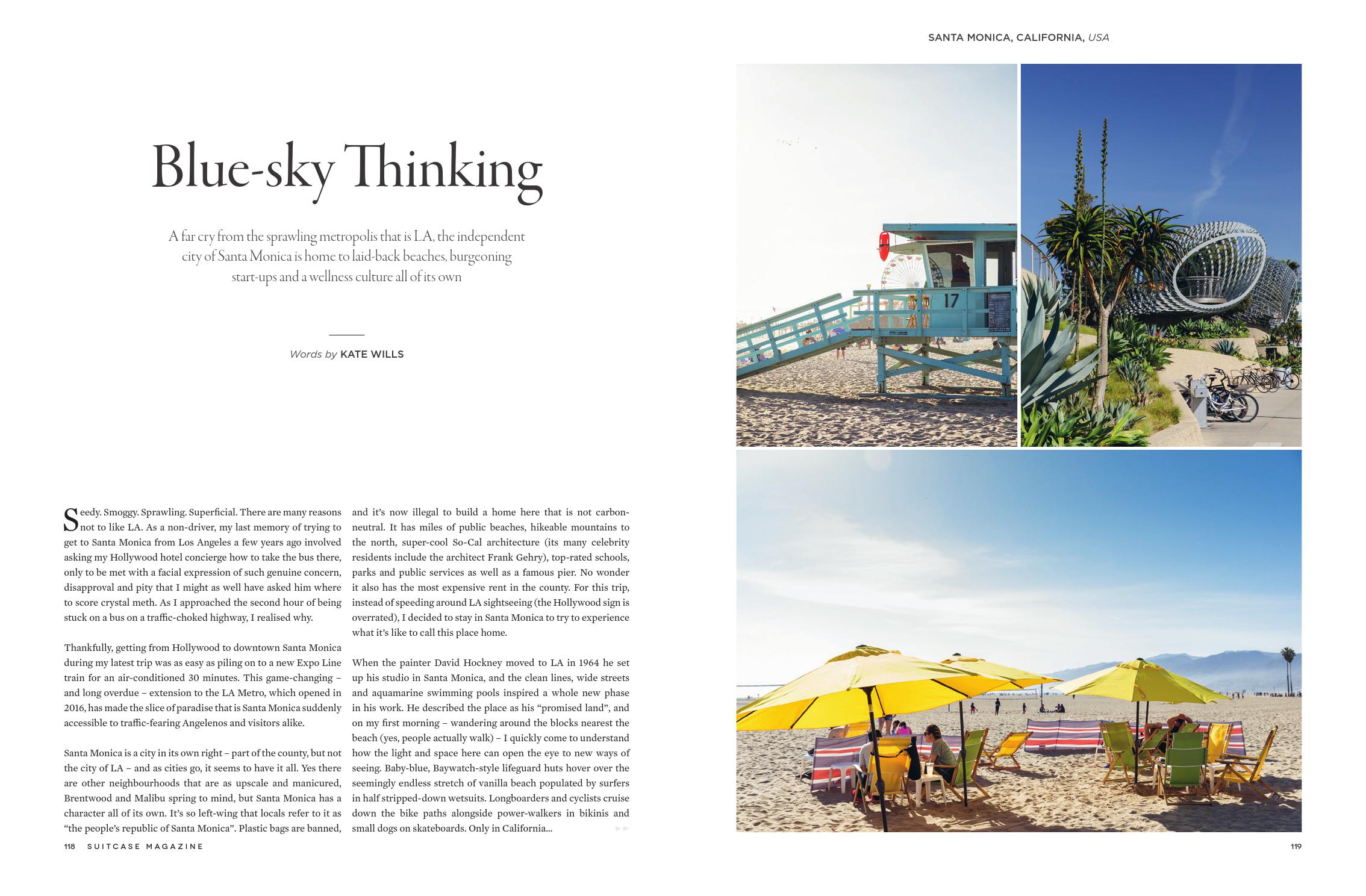 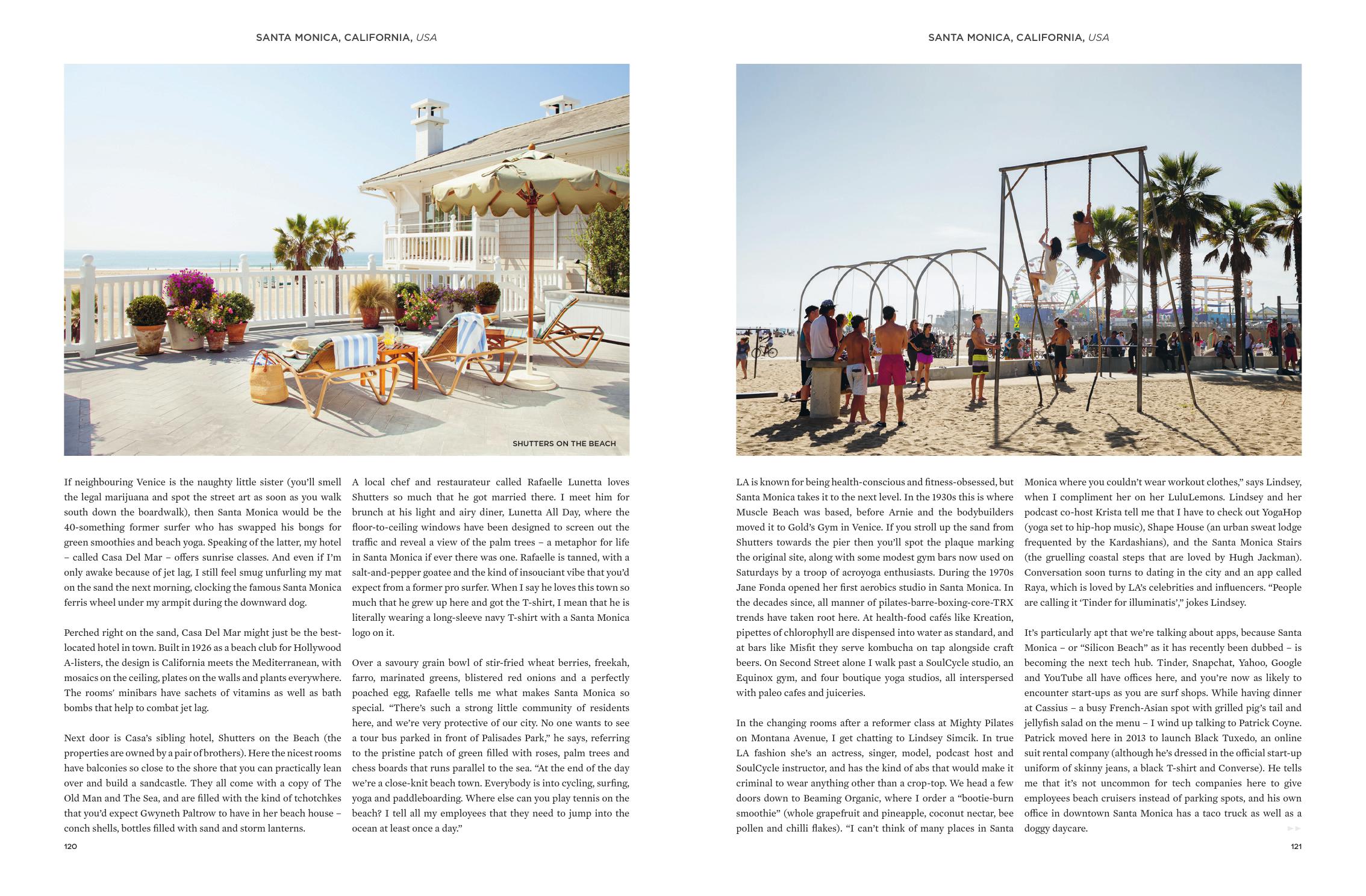 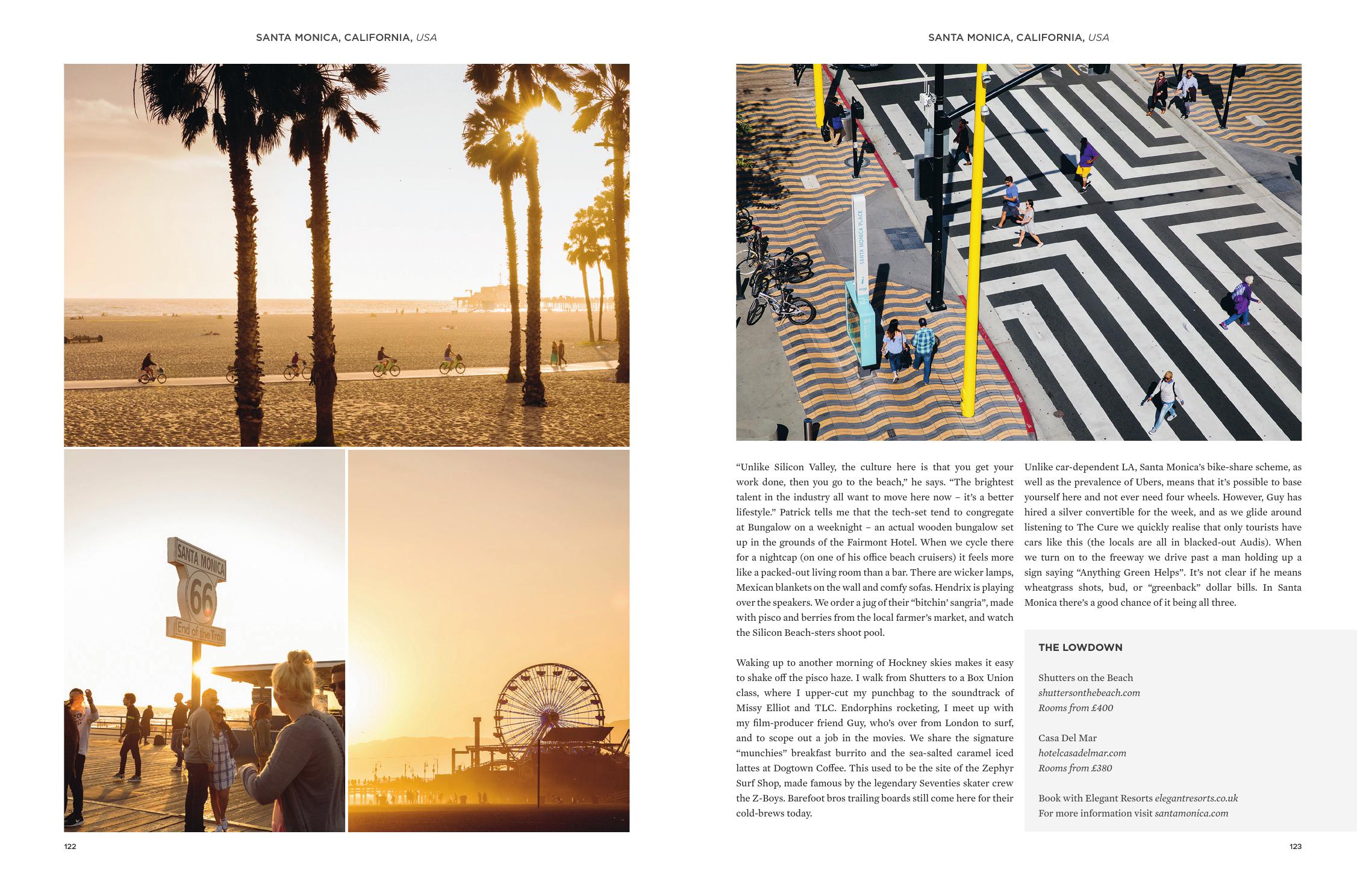 Seedy. Smoggy. Sprawling. Superficial. There are many reasons not to like LA. As a non-driver, my last memory of trying to get to Santa Monica a few years ago was asking my Hollywood hotel concierge how to take the bus there, only to be met with a facial expression of such genuine concern, disapproval and pity that I might as well have asked him where to score crystal meth. And then promptly understanding why, when I ended up stuck on a deserted bus on a traffic-choked 6-lane highway for nearly two hours. Today he could have easily just packed me onto the new Expo Line train which takes you from Hollywood to Downtown Santa Monica in an air-conditioned 30 minutes. This game-changing – and long overdue – extension to the LA Metro, which opened in May 2016, has made the slice of paradise that is Santa Monica suddenly accessible to traffic-fearing Angelenos and visitors alike.

Santa Monica is a city in its own right, not part of the city of LA, and as cities go it seems to have it all. Yes, there are other neighbourhoods which are as upscale and manicured – Brentwood and Malibu spring to mind – but Santa Monica has a character all its own. It’s so left-wing that locals refer to it as “The People’s Republic of Santa Monica”. Plastic bags are banned and it’s now illegal to build a home here that’s not carbon-neutral. It has miles of public beaches, hikeable mountains to the north, super-cool So-Cal architecture (its many celebrity residents include architect Frank Gehry), top-rated schools, parks and public services, and a famous pier. No wonder it also has the most expensive rent in the county. For this trip, instead of speeding around LA sightseeing (the Hollywood sign is overrated), I’ve decided to stay in Santa Monica, to try and experience what it’s like to call this place home.

When the painter David Hockney moved to LA in 1964 he set up his studio in Santa Monica, and the clean lines, wide streets and aquamarine swimming pools inspired a whole new phase in his work. He described it as his ‘promised land’, and on my first morning wandering around the blocks nearest the beach (yes, people actually walk here) one quickly sees how the light and space can open the eye to new ways of seeing. Baby-blue Baywatch-style lifeguard huts hover over the seemingly-endless stretch of vanilla beach and I soak up the surfers in half-stripped down wetsuits, longboarders and cyclists cruising down the bike paths, power-walkers in bikinis and small dogs on skateboards. Only in LA.

If neighbouring Venice is the naughty little sister – you’ll smell the legal marijuana and spot the street art as soon as you walk south down the Boardwalk – Santa Monica would be the forty-something former surfer who has swapped bongs for green smoothies and beach yoga. Speaking of the latter, my hotel Shutters on the Beach offers a class at sunrise every morning. And even if I’m only awake because of jet lag, I still feel smug unfurling my mat on the sand and clocking the famous Santa Monica ferris wheel under my armpit during downward dog.

Shutters On The Beach might just be the best-located hotel in town – clue’s in the name. Perched right on the sand like a giant white clapboard beach hut, the best rooms have balconies so close to the shore I can practically lean over and build a sandcastle. All the rooms have a copy of <The Old Man and The Sea> in them, and are filled with the kind of seaside tchotchke you’d expect Gwyneth Paltrow to have in her beach house – giant conch shells, glass bottles filled with sand and storm lanterns.

One man who loves Shutters so much he got married in it, is chef and restauranteur Rafaelle Lunetta. I meet him for brunch at his light and airy diner Lunetta All Day, where the floor-to-ceiling windows have been specially designed to screen out the traffic and reveal a view of the palm trees, which seems like it could be a metaphor for life in LA. Rafaelle is tanned with a salt and pepper goatee and the grizzled, insouciant vibe you’d expect from a former pro surfer. When I say that he loves this town so much he grew up here and has got the t-shirt, I mean he is literally wearing a long-sleeve navy t-shirt with a Santa Monica logo on it.

Over a Savory Grain Bowl of stir-fried wheat berries, freekah, farro, marinated greens, blistered red onions and a perfectly-poached egg, Rafaelle tells me what makes Santa Monica so special. “There’s such a strong little community of residents here and we’re very protective of our city. No one wants to see a tour bus parked in front of Palisades Park,” he says, referencing the pristine patch of green filled with roses, palm trees and chess boards which stretches parallel to the sea. “At the end of the day, we’re a close-knit beach town. Everybody is into cycling, surfing, yoga, paddleboarding. Where else can you play tennis on the beach? I tell all my employees ‘Guys you need to jump into the ocean at least once a day’.”

LA is known for being health-conscious and fitness-obsessed, but Santa Monica takes it to the next level. In the 1920s this is where Muscle Beach was based, before Arnie and the bodybuilders moved it to Gold’s Gym in Venice. If you stroll up the sand from Shutters towards the Pier you’ll spot the plaque marking the original site, along with some modest gym bars now used on Saturdays by a troop of Acroyoga enthusiasts. During the 1970s, Jane Fonda opened her first aerobics studio in Santa Monica and in the decades since all manner of pilates-barre-boxing-core-TRX trends began life here. At health-food cafes like Kreation, pipettes of chlorophyll are dispensed into your water as standard, and at hipster bars like Misfit they serve kombucha on tap next to the craft beers. On 2nd Street I walk past a SoulCycle studio, an Equinox gym and four boutique yoga studios, all interspersed with paleo cafes and juiceries.

In the changing rooms after a reformer class at Mighty Pilates on Montana Avenue (when in Santa Monica…) I get chatting to Lindsey Simcik. In true LA fashion she’s an actress, singer, model, podcast host and SoulCycle instructor and has the kind of abs that would make it a crime for her to wear anything other than a crop-top. We head a few doors down to Beaming Organic, where I order a Bootie Burn Smoothie (whole grapefruit and pineapple, coconut nectar, bee pollen and chilli flakes). “I can’t think of many places in Santa Monica where you couldn’t wear workout clothes,” jokes Lindsey, when I compliment her on her LuluLemons. Lindsey and her podcast co-host Krista tell me I have to check out YogaHop (yoga set to hip hop music), Shape House (an urban sweat lodge frequented by the Kardashians) and the Santa Monica Stairs (a gruelling set of coastal steps loved by hard-bodies including Hugh Jackman). Conversation soon turns to dating in the city and a new app called Raya loved by LA’s celebrities and influencers. “People are calling it ‘Tinder for illuminatis’,” jokes Lindsey.

It’s apt that we’re talking about apps, because Santa Monica — or “Silicon Beach” as it’s been dubbed – is becoming the next tech hub. Tinder, Snapchat, Yahoo, Google and YouTube all have offices here, and you’re now as likely to see start-ups as you are surf shops. While having dinner at Cassius – a busy French-Asian spot with grilled pig’s tail and jellyfish salad on the menu – I get talking to Patrick Coyne. Patrick moved here in 2013 to launch Black Tuxedo, an online suit rental company, but he’s dressed in the official start-up uniform of skinny black jeans, black t-shirt and Converse. He tells me it’s not uncommon for tech companies here to give employees beach cruisers instead of parking spots, and his own office in Downtown Santa Monica has a taco truck and doggy daycare.

“Unlike Silicon Valley, the culture here is you get your work done and then you go to the beach,” he says. “The brightest talent in the industry all want to move here now – it’s a better lifestyle.” Patrick tells me the tech set tend to congregate at Bungalow on a weeknight – an actual wooden bungalow set up in the grounds of the Fairmont Hotel. When we cycle there for a nightcap (on his office beach cruisers), it feels more like a packed out living room than a bar, with wicker lamps, Mexican blankets on the wall, comfy Chesterfields and Hendrix on the playlist. We order a jug of their Bitchin’ Sangria, made with Pisco and berries from the local Farmer’s Market, and watch the Silicon Beach-sters shoot pool.

Waking up to another morning of Hockney skies makes it easy to shake off the Pisco-haze. I can walk from Shutters to a Box Union class, where I upper-cut my punchbag to a soundtrack of Missy Elliot and TLC. Endorphins sky-rocketing, I meet up with my film-producer friend Guy, who’s over from London to surf and scope out a job in the movies. We share the signature Munchies breakfast burrito and sea-salted caramel iced lattes at Dogtown Coffee. This used to be the site of of the Zephyr Surf Shop – made famous by the legendary 70s skater crew the Z-Boys – and barefoot bros trailing boards still come in here for their cold-brews.

Unlike the rest of car-dependent LA, Santa Monica’s bike share scheme, plus the prevalence of Ubers, means that it’s entirely possible to base yourself here and not ever need four wheels. But Guy’s hired a silver convertible for the week, and as we glide around listening to The Cure, we quickly realize that only tourists have cars like this – the locals are all in blacked-out Audis. When we turn onto the freeway we drive past a homeless man holding up a sign saying ‘Anything Green Helps’. It’s not clear if he means wheatgrass shots, ‘greenback’ bills or bud. In Santa Monica it’s probably all three.