According to Steven Shaw – the founder of The Art Of Swimming – the way we learn to swim is all wrong, and could be doing more harm than good. Kate Wills went for a lesson to see if she could overcome her face-in-water fear and finally master the front crawl.

First things first: I CAN swim. In answer to the question everyone asks when I tell them I’m going for a swimming lesson (it occurs to me that no one would do the same if you said you were off to perfect your tennis or golf skills). But my breaststroke is less Rebecca Adlington, more granny who doesn’t want to get her hair wet. And according to Steven Shaw, founder of The Art of Swimming, my strained lengths with my head sticking out the water aren’t doing me any favours.

Shaw developed his method 25 years ago, after years of competitive swimming left him with neck and back problems, leading him to train as an Alexander Technique teacher. During his training Shaw worked as a lifeguard, and it was while observing people’s bad posture in the pool that he realised Alexander’s principles of alignment could be applied to the water too. Art of Swimming was born and Shaw has become something of a guru to the thousands of people he’s taught around the world. With his totally bald head and cult-like following, he has been called ‘The Buddha of Breastroke’. One devotee of his style tells me that after a class with Shaw you feel like “you’re not swimming in the water, the water’s swimming you.”

Which is why I’m now in a pool in Paddington, wearing giant goggles that make me look like I’m about to go welding (Shaw tells me that triathletes use them for greater visibility), while wading sideways down the lane like a crab. This is a move called The Bellows, designed to co-ordinate breathing and movement. Any memories of swimming lessons at school (splashing around feeling cold while a teacher shouted instructions from the side) are quite literally blown out of the water, as Steven gets in the pool beside me and uses his hands to pull me along the water, carefully adjusting my head, neck and back while I glide. 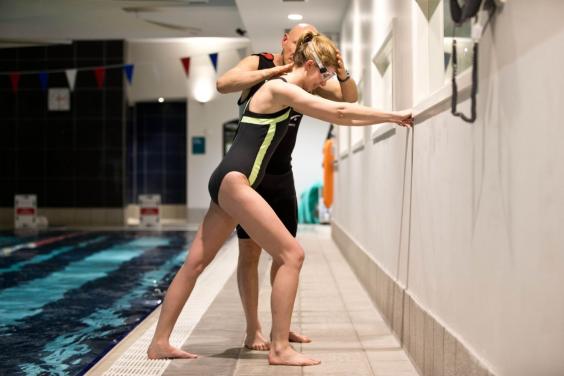 We all know how good for us swimming can be: it tones the core, arms and legs, helps you relax and, according to the NHS, done regularly it can reduce the risk of heart disease, Type 2 diabetes and stroke. But for whatever reason – whether it’s the closure of public pools or that getting wet seems too much hassle – nobody’s swimming any more. 245,000 people binned their goggles last year and, according to the Amateur Swimming Association, one in five adults in England can’t swim. And, according to Shaw, those that can aren’t swimming properly.

“The majority of people are doing more harm than good to their body when they’re swimming,” he explains. “I often watch people battling the water, gasping for breath. They don’t get very much pleasure from it. Breaststroke is most people’s default stroke, but having your head up, as a lot of people do, acts like a brake, so your arms and legs need to work harder to defeat that resistance.” All of which means I’m going to need to put my face in the water. And, considering I have to hold my nose if I’m even thinking about going under, this could be a problem.

Steven’s speciality is adults who can’t swim – whether that’s because they’re disabled, have a phobia of water or just never learned. “I’m teaching a woman at the moment who has such a severe anxiety of water that she can’t have a bath,” says Shaw. “She was crying just looking at the pool, but after a few sessions she’s now comfortable in the water.”

I can remember as a child the horrible sensation of water gushing up my nose and not being able to breathe for what felt like minutes (but was probably seconds). “People that have anxiety about putting their face in the water think it will take a few months to do it, but usually it takes between one and two sessions before they can enjoy it,” promises Steven. “If you’ve had this fear for a number of years, and you move through it, it’s a real liberation.”

We spend a lot of time combatting the natural reflex we all have to pull our face away from a splash by collecting water in our palms and pouring it over our heads. At first it’s uncomfortable, then I just feel stupid, but eventually it feels calming. Well, as calming as it’s possible to feel rubbing chlorine-y liquid down your face. Steven demonstrates that the correct angle of my head guarantees no water can go up my nose, as does breathing out.

Soon enough I’m on my own, with my head down (no nose holding!), coming up for air in time with my arms and legs moving. The moment when I finally ‘get it’ feels less like swimming, more like gliding weightlessly through my own underwater world. Keeping the rhythm and breathing in sync is actually very meditative. Or as Steven poetically puts it: “Swimming is like writing a sentence, and the breathing is the punctuation.”

I feel as streamlined as an otter, but then Steven films me on an iPad and shows me exactly what I’m doing wrong – head out higher than I need when I come up for air, legs not quite in sync. Once I’ve perfected the stroke, it may feel slow, but I’m actually going much faster than my ‘old lady’ breaststroke. I’m so happy that I can finally put my face in that I’m getting a bit carried away with breathing out bubbles – “try and sound less like a jacuzzi,” suggests Steven helpfully.

Shaw now spends most of his time training other people to teach his method, and there are now 250 Art of Swimming instructors worldwide, mostly in the UK and Portugal. “Some of them are physiotherapists, some are swimming teachers, some are Alexander Technique teachers,” says Steven. “We have people training in their early 20s right through to their late 60s. We’re starting training teachers in Greece, the US and Germany, Holland. Swimming is the only sport that you can do for your whole life, from a baby to 70+. You can just keep going. My mum is in her eighties and does a kilometre of crawl every day.”

Ah yes, the crawl. The stroke that separates the part-time pool go-ers from the pros. When Steven demonstrates it, it bears no resemblance to the trashing, aggressive windmilling down the lane that you usually see. He turns his body almost totally to the side with every arm movement, there’s barely any splash – it looks graceful and effortless. I’m really keen to have a go, so we break down the crawl into poses that feel like a cross between fencing and Tai Chi, which Steven recommends I practice on dry land.

All that breathing left me feeling light-headed and a bit euphoric. I can see why Shaw makes the people he teaches evangelical about the process. “Every person has an inner mermaid or merman,” he says. “If they say they don’t like swimming it’s just because they have had a bad experience at some point. Unless something traumatises us, being in the water is a very natural activity.That’s my vision – to give people the right tools so that they can fulfil their potential in the water.”

It’s amazing that something I’ve struggled all my life with – putting my face underwater – can be overcome in one session. I could be an Art of Swimming convert too. And if you see someone in the pool who looks like they’re doing a jacuzzi impression – that’s probably me.

For more information on The Art of Swimming. Prices start at Â£199 for a 6-week group course of 4-6 people.