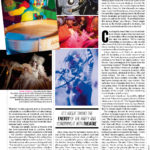 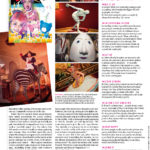 Garrett Moore and Francesco Pastori don’t just plan parties, they throw week-long extravaganzas complete with live animals and exploding sets. As they prepare their first public event, they tell Kate Wills why the best celebrations are only moments away from disaster.

Will your office Christmas party feature drag queens shooting confetti cannons? A Great Gatsby-themed pillow fight? A zombie disco crocodile? If not, then you might want to enlist the services of Immersive Cult’s Garrett Moore and Francesco Pastori – if you can get them. Loved by the fashion pack and in-the-know A-listers, Immersive Cult are so exclusive that their website consists of a single black page with an email address, and they can take an entire year to plan a single party. I say ‘party’ – Moore refers to them as ‘five-act plays’. These two have not so much raised the bar as filled it with pole-dancing monkeys – which is precisely what they did for Sushisamba’s third birthday party this month, where FKA Twigs and Robert Pattinson watched Grace Jones perform in a mini Brazilian jungle.

The pair met four years ago while working on experiential film events for Secret Cinema (Moore as a director and Pastori as a set designer) and realised they shared a love of bringing people together. Pastori, 32, is shy, thoughtful and softly spoken with ruffled hair and a lanky frame. Originally from Tuscany, he came to London ten years ago to study theatre design at Central Saint Martins. Moore, 29, is very much the excitable posh party boy. His father is Derry Moore, photographer and 12th Earl of Drogheda, and his mother is Alexandra Henderson, a BBC producer. He grew up in Notting Hill, where Margaret Thatcher would regularly pop in for parties, and admits to a childhood love of entertaining. He studied drama at Guildhall, and has the square-jawed good looks of an actor. However, bar a bit part with Benedict Cumberbatch in Parade’s End, acting’s loss has been the international party scene’s gain.

Through his family, Moore is friends with the best-connected man in London, Robin Birley, and the very first Immersive Cult bash – forAnOther magazine’s 25th issue and themed around Alice Through the Looking Glass – was held in Birley’s club Loulou’s in 2013. ‘Robin found out what we were doing and said, “You should do a party here,” ’ says Moore. ‘So we made him this book of our ideas – the first page was a mirror with reflective text. Robin is completely insane and understands the importance of doing something really elaborate for people, so he just said, “Yeah, let’s do it!” ’ The pair got to work and, a year later, Kate Moss, Sienna Miller and Poppy Delevingne partied with a giant Humpty Dumpty and a White Queen whose dress turned into a carpet.

Since then, they’ve recreated Mexico for a Day of the Dead party for Loulou’s and had Ozwald Boateng admire their giraffe-print suits at a psychedelic grotto they made for the fashion designer Philip Colbert and his photographer wife Charlotte at the Venice Biennale. Then there was the ‘crazy’ Great Gatsby shindig – ‘pillow fights and feathers everywhere’ – and a Surrealist Ball, which had ballet dancing under fireworks, living sculptures and a dancing nose. ‘You seem surprised, but it was a Surrealist Ball, so obviously a dancing nose was essential,’ jokes Moore. In all they’ve done 26 parties and have built up an ‘enormous team’ of 15 heads of department and 140 freelance artists and performers, who come together at their workshop in Walthamstow where they always break for pasta at lunch, cooked by Pastori.

The customised pastel suits they’re wearing today (complete with teddy bear heads with flashing eyes made out of bicycle lights) were made by their costume designer Annike Flo for Tokyo Dreams, the London Fashion Week event they threw for Miu Miu and Love magazine. It saw Suki Waterhouse, Harry Styles and Georgia May Jagger making merry in a bonsai forest, drummer girls playing in neon bikinis and a cat cafÃ© in the toilet. ‘It snowballed into this insane thing,’ says Moore. ‘Every single person in the world seemed to be there, but we were worried about this cat in the loo!’

Creating this much fun is a serious business. Moore argues that our exposure to incredible effects in films has upped the ante for parties: ‘We’re craving something as amazing as any special effect in real life. I don’t do drugs, so for me it’s about creating the most amazing trip you can ever have without the hangover.’

Tokyo Dreams took them six months to pull off, including a two-week research trip to Japan. ‘We knew Japanese people would be coming so we had to do Japan justice,’ says Moore. ‘Can you imagine if we’d just done the tourist-trap version?’ Perish the thought.Moore and Pastori went on ‘multiple’ trips to New Orleans to research Loulou’s 2014 Mardi Gras bash, attended by Moss, MIA and Alexa Chung. ‘We did a voodoo ritual to summon the disco zombie crocodile, which had lasers coming out of it,’ says Pastori. ‘The audience were stamping their feet, everyone was going crazy. It’s about taking the energy of the party – the dancing, the sexiness, the intensity of the crowd – and then combining it with theatre to tell a story.’

Love’s Katie Grand was ‘incredibly chilled’ about her Tokyo extravaganza, but not all their clients are so hands-off. ‘The biggest challenge is somebody who doesn’t trust us,’ says Pastori. ‘They try to micromanage us sometimes, but they’re always happy with the result.’ The company doesn’t do social media, so all their bookings happen by word of mouth.

Neither will talk about how much these parties cost. ‘The budget varies so much,’ says Moore vaguely. From what to what? ‘From high to low! That’s all I’ll say. It’s not about the money – if a project excites us, we’ll do it.’ Pastori chimes in: ‘We have done things for almost nothing because we wanted to do them.’ ‘Don’t say that!’ Moore squeals, mock-horrified.

For most of their clients, money is no object. ‘We met somebody very high-profile the other day,’ says Moore. ‘He said, “Listen, I love what you do. You’re doing my party. This is the date.” I said to the person who he was with, “What’s the budget?” And they said, “Whatever you need to make it good.” ’

Sometimes the theme emerges from the location. ‘We did an event for a client with a beautiful house in Tuscany,’ says Pastori. ‘We found an abandoned tobacco factory on her estate so we had the idea to make the party like Andy Warhol’s Factory. We had a huge industrial table seating 200 people and everyone ate Campbell’s soup out of the tin.’

While they’ve turned down most brands, they made exceptions for Louis Vuitton, Chanel and Christie’s. When the auction house called on their skills in 2014 for an Art Ball, the pair were initially stumped as to how to make such a ‘sensible space’ fun. But when they followed a member of staff carrying a painting into storage, they stumbled upon the place where the antiques are appraised, and decided that everyone should arrive at the party at the goods entrance as a work of art, to be photographed and valued – whereupon enormous crates exploded and characters from paintings, including Frida Kahlo and Picasso’s Weeping Woman, popped out.

Despite months of research and meticulous planning, ‘there are always near-disasters,’ says Pastori. ‘That’s part of it. The last few days [before an event] are so crazy – I don’t sleep.’ But any mistakes are effortlessly styled out. ‘With Louis Vuitton we were not ready to open,’ says Moore. ‘As guests were arriving we had people they must have thought were performers, dressed up, trying to turn lights on.’

Having conquered the fashion and art party circuits, the next step is to roll out their parties to the public, with a ticketed event happening in March. Details are still hush-hush. ‘We want everyone to join the cult,’ says Moore. ‘But initially it’s going to be on an intimate scale. It works really well when you feel like you’ve been changed personally.’

Does it ever feel a bit sad, after they’ve sweated over something for months, to see the dream dismantled after just one night of debauchery? ‘No, that’s the beauty of it,’ insists Pastori. ‘Everyone comes together for that one moment and then it’s happened.’