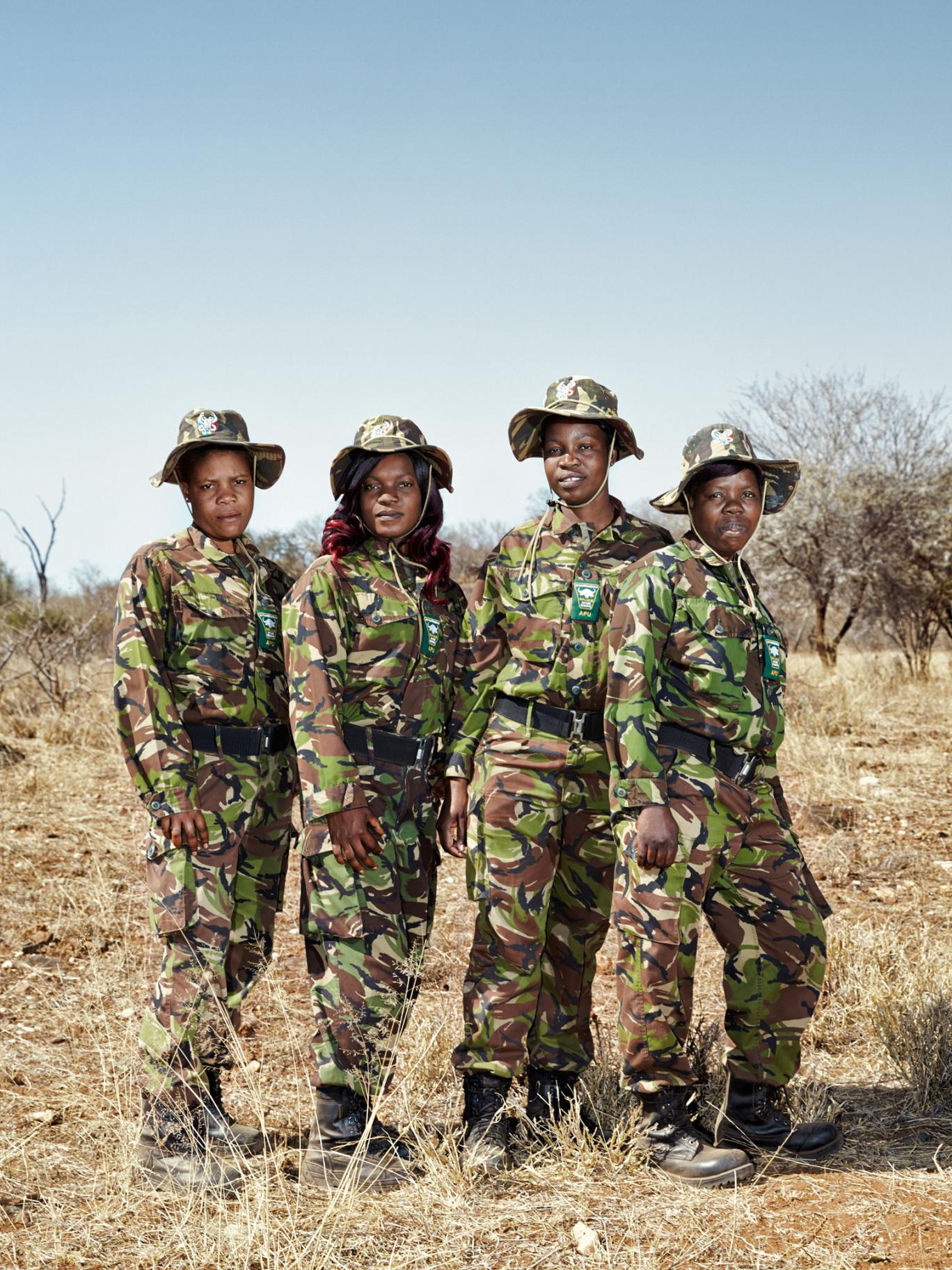 A full moon over The Balule Game Reserve, in the north-west tip of Kruger National Park, South Africa means two things — poachers are out on the hunt, and so are the Black Mambas. No, not the fastest and deadliest snakes in the world, but a specially trained team of rangers — nearly all of them young women — who police the park night and day to protect the animals from illegal hunting.

Photographer Julia Gunther spent a week documenting the Black Mambas as part of her project Proud Women of Africa. “When I heard that there was this group of ladies patrolling the reserves — unarmed and in camouflage — trying to save South Africa’s natural heritage, I knew that my next subject had been handed to me on a silver platter.”

The Black Mamba Anti-Poaching Unit (APU) is made up of 24 women and two men from villages surrounding the park, in the north-east of the country. Craig Spencer, head warden of Balule, came up with the idea for a mostly female squad in 2013. “We experimented with a lot of different technologies [to combat poaching] — drones, thermal optics,” he says. “The only thing that has shown any return on its investment is the Black Mambas.”

The women, who are all in their twenties and early-thirties, spend long days tracking humans and animals, searching for snares and identifying fence tampering. “The women’s ability to pick up on subtle differences is often much better than the men,” says Spencer. “They are unarmed, and operate as a first line of detection. When an incursion is spotted, they call in the armed unit, and set up observation posts to assist that unit.”
Mambas on the march. The unit has so far removed more than 1,000 poachers’ snares, and been awarded the UN’s Champions of the Earth award Julia Gunther
The 40,000 hectares of Balule are home to leopards, lions, cheetahs, hippos and elephants, but it’s the rhinos — whose horns can be sold at high prices for use in traditional Asian medicine — that are being poached to extinction. A record number of rhinos (1,215, equivalent to one every seven hours) were killed in South Africa last year; if that continues they could be wiped out in less than 10 years.

Since the Black Mambas started patrolling two years ago, 23 rhinos have been killed in a neighbouring reserve, but only three in Balule. For Lukie, 26, that’s three too many: “Poaching is very bad. The next generation must know rhinos and elephants in life. If poaching is allowed they will only see these animals in a picture. This is not right.” But alongside tackling the poachers, these women are also challenging gender stereotypes in South Africa, where conservation is often considered a man’s world. “I am proud to be a Black Mamba,” says Winnie, 22. “Many people don’t know that a woman can do this job. We will show them that we can do it.” As Leitah, also 22, puts it: “I am strong, I am a woman — and I bite like a mamba!”
The women work in the park for three weeks at a time, living in an open camp where facilities are basic. “Elephants had ripped out the tank, so we had no running water while I was there,” says Julia. When the three weeks are up they return to their families for 10 days; many of the women are leaving young children behind. The job is fraught with danger and difficulty — not just the risk of encountering poachers with rifles, but also the wild animals themselves. “On one full moon patrol, we came across a group of female lions in the road,” says Julia. “We tried to turn the car around but they came closer and closer… but I felt safe because I was with the Mambas.”

Some of the women are saving their wages of around Â£160 a month to train for other careers — as nurses, pilots, paramedics — and many are the main breadwinners in their families. Many communities around the park are suffering severe unemployment, which also helps explain why so many young men are resorting to poaching.
The Mambas have just been awarded the United Nations’ Champions of the Earth award, and there are hopes that the success of the first mainly female APU will be replicated over Africa. “They’re planning on recruiting a new group by next year — let’s call them the Baby Mambas,” says Julia.

So far these female rangers have arrested six poachers, removed over 1,000 snares and put five poachers’ camps out of action. “I am not afraid. I know what I am doing and I know why I am doing it,” says Leitah. “If you see the poachers you tell them not to try anything, you tell them we are here and it is they who are in danger.”

For more information or to sponsor the Black Mambas, go to blackmambas.org.

See the piece in full at The Independent.