Aubergine is the new black 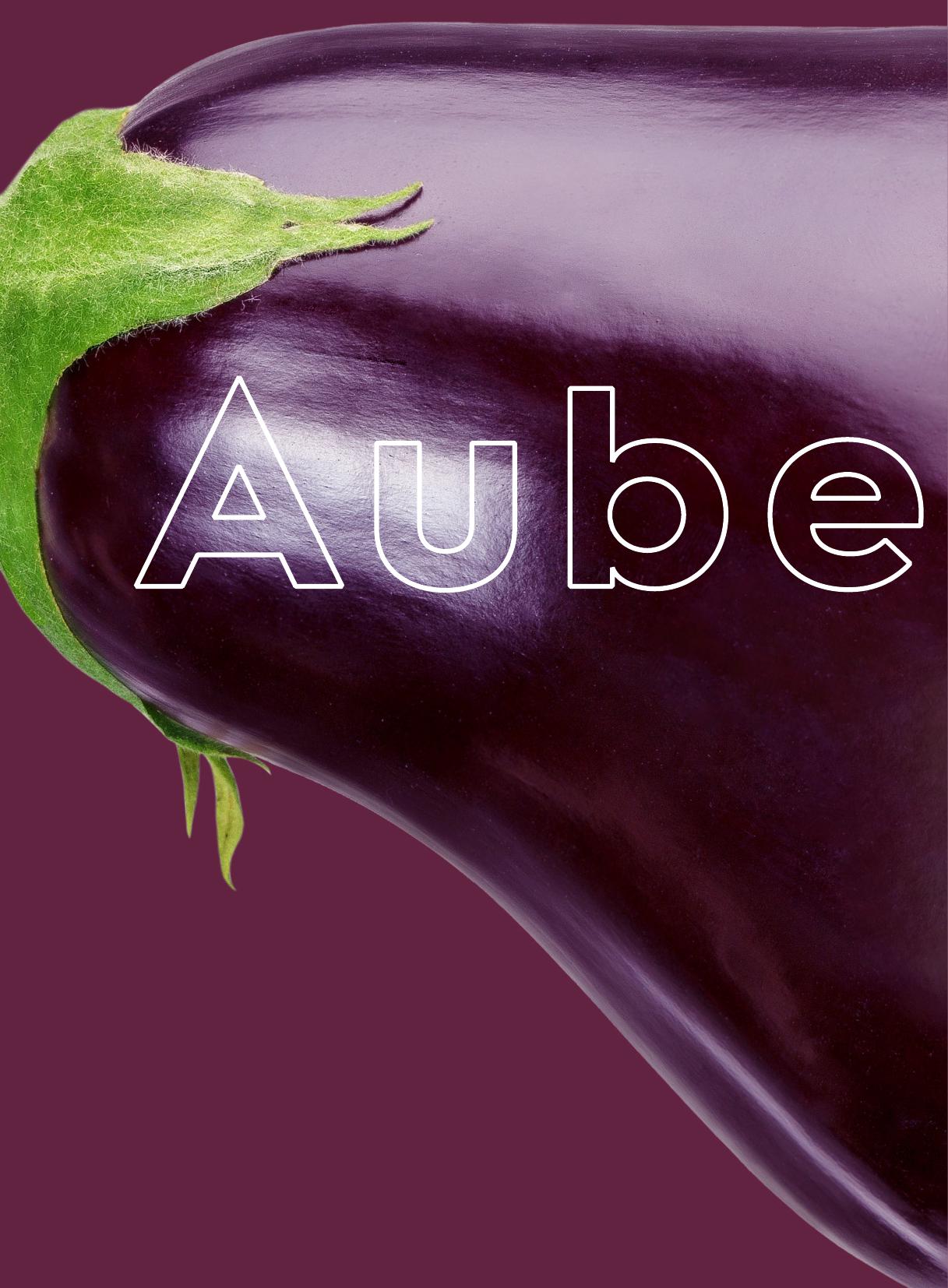 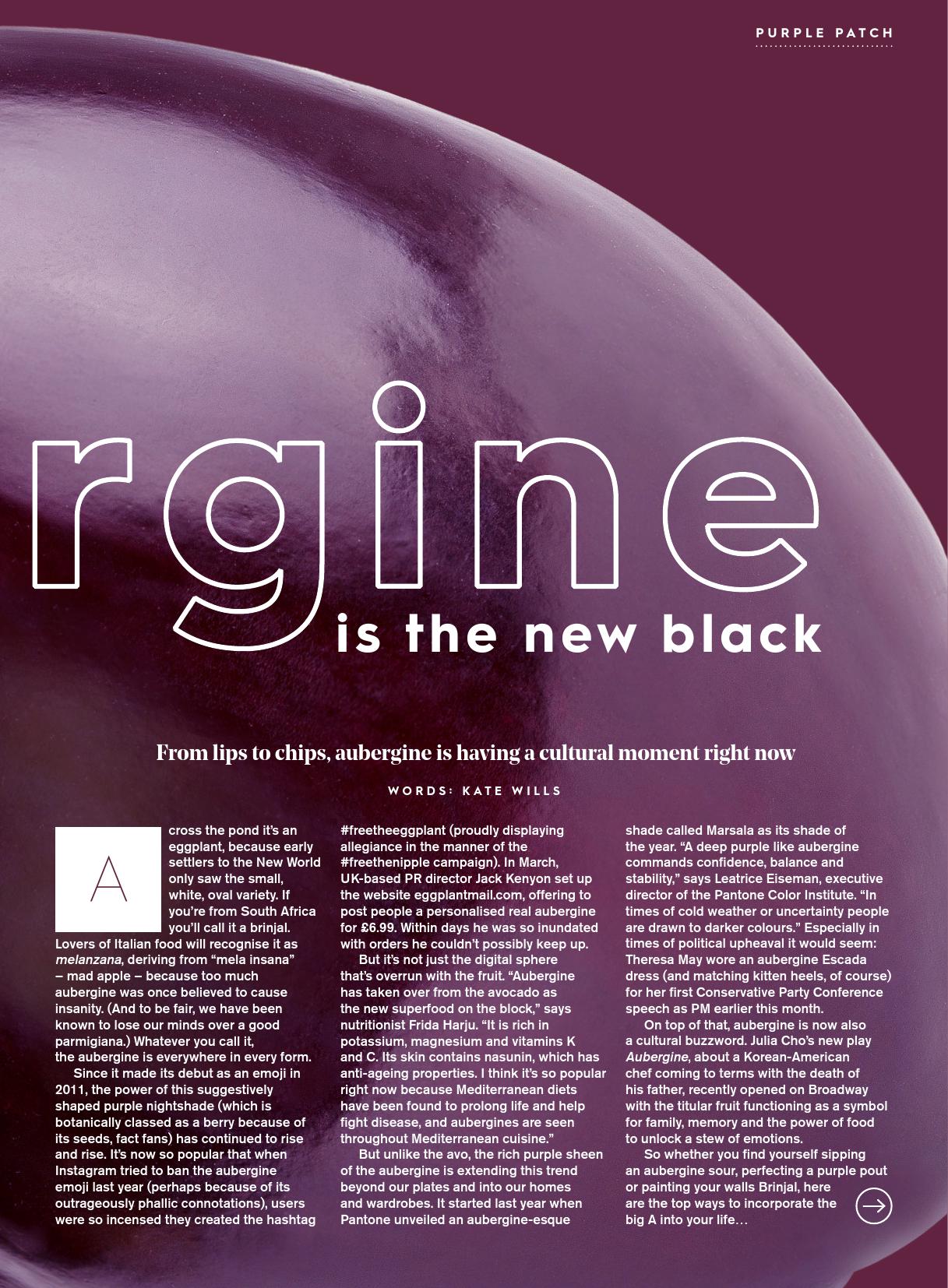 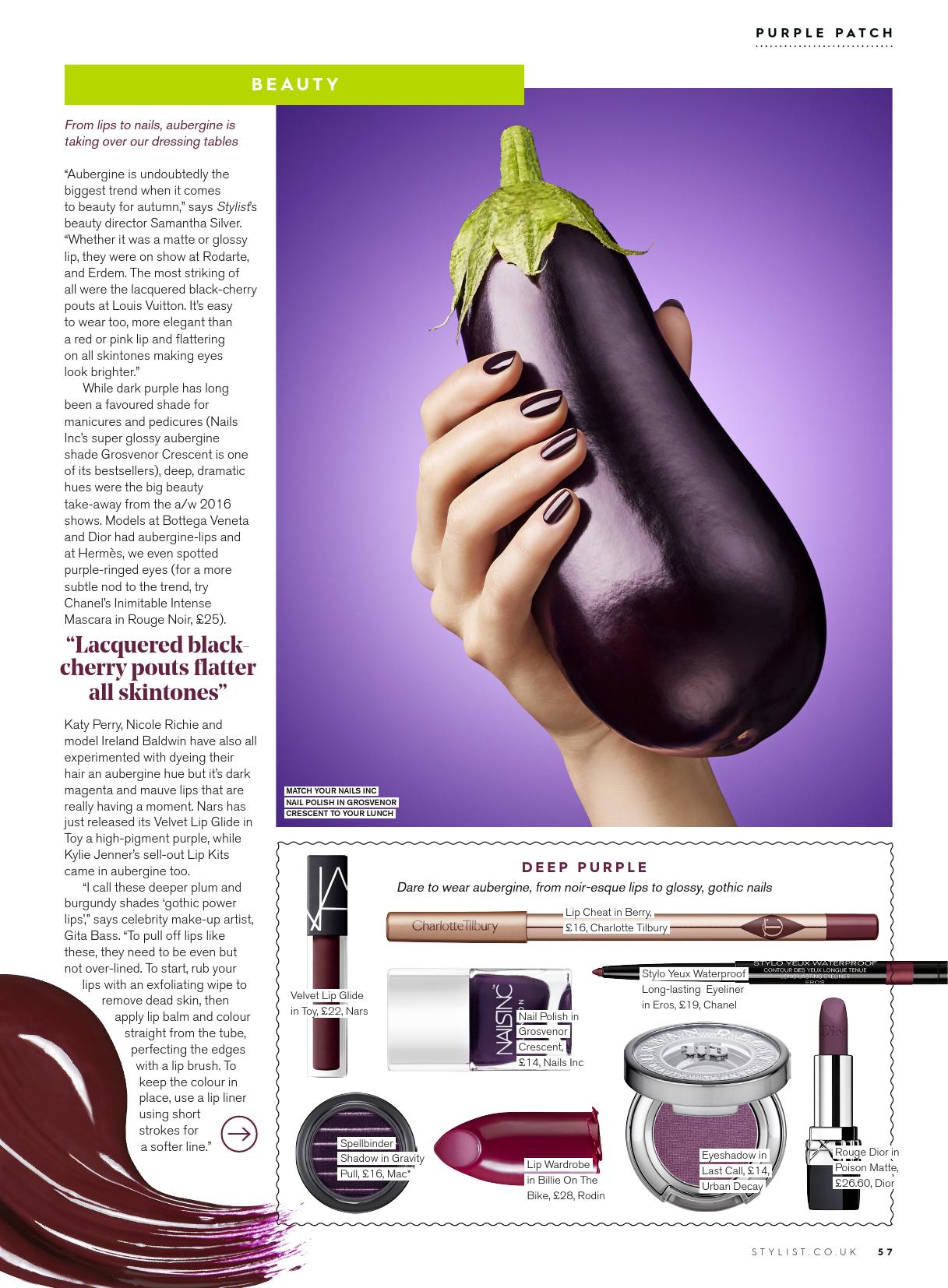 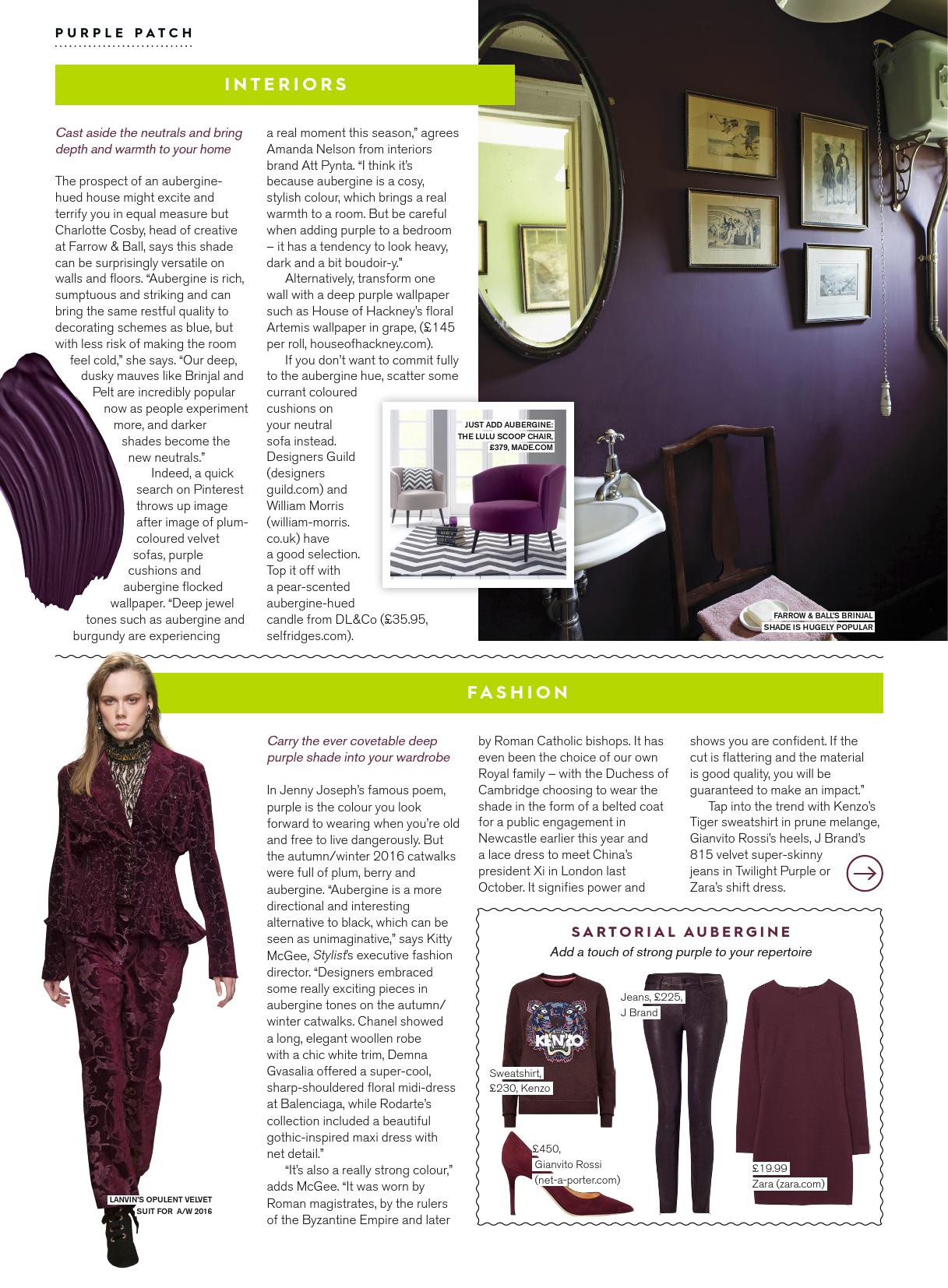 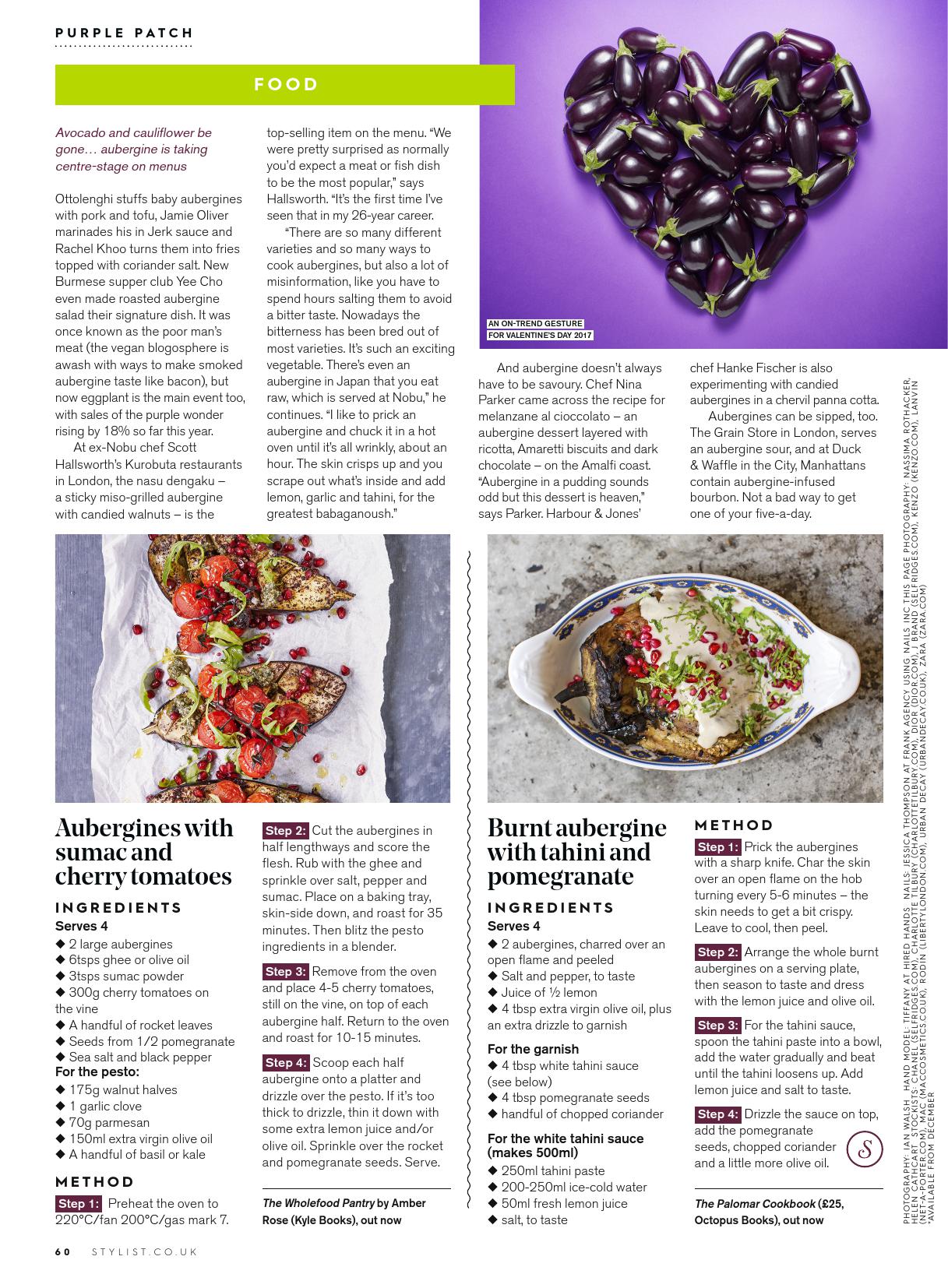 Forget about the avocado, it’s all about aubergine now — on our plates, around our homes and even in our wardrobes…

Across the pond it’s an eggplant, because early a settlers to the New World only saw the small, white, oval variety. If you’re from South Africa you’ll call it a brinjal. Lovers of Italian food will recognise it as melanzana, deriving from “mela insana” — mad apple — because too much aubergine was once believed to cause insanity. (And to be fair, we have been known to lose our minds over a good parmigiana.) Whatever you call it, the aubergine is everywhere in every form.

Since it made its debut as an emoji in 2011, the power of this suggestively shaped purple nightshade (which is botanically classed as a berry because of its seeds, fact fans) has continued to rise and rise. It’s now so popular that when Instagram tried to ban the aubergine emoji last year (perhaps because of its outrageously phallic connotations), users were so incensed they created the hashtag #freetheeggplant (proudly displaying allegiance in the manner of the #freethenipple campaign). In March, UK-based PR director Jack Kenyon set up the website eggplantmail.com, offering to post people a personalised real aubergine for Â£6.99. Within days he was so inundated with orders he couldn’t possibly keep up.

But it’s not just the digital sphere that’s overrun with the fruit. “Aubergine has taken over from the avocado as the new superfood on the block,” says nutritionist Frida Harju. “It is rich in potassium, magnesium and vitamins K and C. Its skin contains nasunin, which has anti-ageing properties. I think it’s so popular right now because Mediterranean diets have been found to prolong life and help fight disease, and aubergines are seen throughout Mediterranean cuisine.”

But unlike the avo, the rich purple sheen of the aubergine is extending this trend beyond our plates and into our homes and wardrobes. It started last year when Pantone unveiled an aubergine-esque shade called Marsala as its shade of the year. “A deep purple like aubergine commands confidence, balance and stability,” says Leatrice Eiseman, executive director of the Pantone Color Institute. “In times of cold weather or uncertainty people are drawn to darker colours.” Especially in times of political upheaval it would seem: Theresa May wore an aubergine Escada dress (and matching kitten heels, of course) for her first Conservative Party Conference speech as PM earlier this month.

On top of that, aubergine is now also a cultural buzzword. Julia Cho’s new play Aubergine, about a Korean-American chef coming to terms with the death of his father, recently opened on Broadway with the titular fruit functioning as a symbol for family, memory and the power of food to unlock a stew of emotions.

So whether you find yourself sipping an aubergine sour, perfecting a purple pout or painting your walls Brinjal, here are the top ways to incorporate the big A into your life…

From lips to nails, aubergine is taking over our dressing tables

Aubergine is undoubtedly the biggest trend when it comes to beauty for autumn,” says Stylist’s beauty director Samantha Silver. “Whether it was a matte or glossy lip, they were on show at Rodarte, and Erdem. The most striking of all were the lacquered black-cherry pouts at Louis Vuitton. It’s easy to wear too, more elegant than a red or pink lip and flattering on all skintones making eyes look brighter.”

While dark purple has long been a favoured shade for manicures and pedicures (Nails Inc’s super glossy aubergine shade Grosvenor Crescent is one of its bestsellers), deep, dramatic hues were the big beauty take-away from the a/w 2016 shows. Models at Bottega Veneta and Dior had aubergine-lips and at HermeÌ€s, we even spotted purple-ringed eyes (for a more subtle nod to the trend, try Chanel’s Inimitable Intense Mascara in Rouge Noir, Â£25).

Katy Perry, Nicole Richie and model Ireland Baldwin have also all experimented with dyeing their hair an aubergine hue but it’s dark magenta and mauve lips that are really having a moment. Nars has just released its Velvet Lip Glide in Toy a high-pigment purple, while Kylie Jenner’s sell-out Lip Kits came in aubergine too.

“I call these deeper plum and burgundy shades ‘gothic power lips’,” says celebrity make-up artist, Gita Bass. “To pull off lips like these, they need to be even but not over-lined. To start, rub your lips with an exfoliating wipe to remove dead skin, then apply lip balm and colour straight from the tube, perfecting the edges with a lip brush. To keep the colour in place, use a lip liner using short strokes for a softer line.”

Read more:Â This is the one reason you need to wash your makeup brushes

The prospect of an aubergine-hued house might excite and terrify you in equal measure but Charlotte Cosby, head of creative at Farrow & Ball, says this shade can be surprisingly versatile on walls and floors. “Aubergine is rich, sumptuous and striking and can bring the same restful quality to decorating schemes as blue, but with less risk of making the room feel cold,” she says. “Our deep, dusky mauves like Brinjal and Pelt are incredibly popular now as people experiment more, and darker shades become the new neutrals.”

Indeed, a quick search on Pinterest throws up image after image of plum-coloured velvet sofas, purple cushions and aubergine flocked wallpaper. “Deep jewel tones such as aubergine and burgundy are experiencing a real moment this season,” agrees Amanda Nelson from interiors brand Att Pynta. “I think it’s because aubergine is a cosy, stylish colour, which brings a real warmth to a room. But be careful when adding purple to a bedroom — it has a tendency to look heavy, dark and a bit boudoir-y.”

Alternatively, transform one wall with a deep purple wallpaper such as House of Hackney’s floral Artemis wallpaper in grape, (Â£145 per roll, houseofhackney.com).

If you don’t want to commit fully to the aubergine hue, scatter some currant coloured cushions on your neutral sofa instead. Designers Guild (designersguild.com) and William Morris (william-morris.co.uk) have a good selection. Top it off with a pear-scented aubergine-hued candle from DL&Co (Â£35.95, selfridges.com).

Carry the ever covetable deep purple shade into your wardrobe

In Jenny Joseph’s famous poem, purple is the colour you look forward to wearing when you’re old and free to live dangerously. But the autumn/winter 2016 catwalks were full of plum, berry and aubergine. “Aubergine is a more directional and interesting alternative to black, which can be seen as unimaginative,” says Kitty McGee, Stylist’s executive fashion director. “Designers embraced some really exciting pieces in aubergine tones on the autumn/ winter catwalks. Chanel showed a long, elegant woollen robe with a chic white trim, Demna Gvasalia offered a super-cool, sharp-shouldered floral midi-dress at Balenciaga, while Rodarte’s collection included a beautiful gothic-inspired maxi dress with net detail.”

“It’s also a really strong colour,” adds McGee. “It was worn by Roman magistrates, by the rulers of the Byzantine Empire and later by Roman Catholic bishops. It has even been the choice of our own Royal family — with the Duchess of Cambridge choosing to wear the shade in the form of a belted coat for a public engagement in Newcastle earlier this year and a lace dress to meet China’s president Xi in London last October. It signifies power and shows you are confident. If the cut is flattering and the material is good quality, you will be guaranteed to make an impact.”

Ottolenghi stuffs baby aubergines with pork and tofu, Jamie Oliver marinades his in Jerk sauce and Rachel Khoo turns them into fries topped with coriander salt. New Burmese supper club Yee Cho even made roasted aubergine salad their signature dish. It was once known as the poor man’s meat (the vegan blogosphere is awash with ways to make smoked aubergine taste like bacon), but now eggplant is the main event too, with sales of the purple wonder rising by 18% so far this year.

At ex-Nobu chef Scott Hallsworth’s Kurobuta restaurants in London, the nasu dengaku — a sticky miso-grilled aubergine with candied walnuts — is the top-selling item on the menu. “We were pretty surprised as normally you’d expect a meat or fish dish to be the most popular,” says Hallsworth. “It’s the first time I’ve seen that in my 26-year career.

“There are so many different varieties and so many ways to cook aubergines, but also a lot of misinformation, like you have to spend hours salting them to avoid a bitter taste. Nowadays the bitterness has been bred out of most varieties. It’s such an exciting vegetable. There’s even an aubergine in Japan that you eat raw, which is served at Nobu,” he continues. “I like to prick an aubergine and chuck it in a hot oven until it’s all wrinkly, about an hour. The skin crisps up and you scrape out what’s inside and add lemon, garlic and tahini, for the greatest babaganoush.”

And aubergine doesn’t always have to be savoury. Chef Nina Parker came across the recipe for melanzane al cioccolato — an aubergine dessert layered with ricotta, Amaretti biscuits and dark chocolate — on the Amalfi coast. “Aubergine in a pudding sounds odd but this dessert is heaven,” says Parker. Harbour & Jones’ chef Hanke Fischer is also experimenting with candied aubergines in a chervil panna cotta.

Aubergines can be sipped, too. The Grain Store in London, serves an aubergine sour, and at Duck & Waffle in the City, Manhattans contain aubergine-infused bourbon. Not a bad way to get one of your five-a-day.