By admin In Lifestyle, Travel
lemur yoga the times yoga with lemurs

It’s the bane of any modern yogi’s life. You’re in a busy yoga class, just getting into your flow, when you look up from your downward dog to see someone’s bum right in your face. It’s not often that the bum in question is attached to a 2ft-long fluffy black and white striped tail, though, but then this isn’t just any yoga class, this is lemoga — yoga with lemurs, the latest wellness craze. Or at least the thing that’s got the internet talking, after photos of the primates doing lotus-like poses went viral.

Armathwaite Hall, a luxury hotel and spa in Keswick in the Lake District, is the first and only place in the world to offer this activity. Well, of course it is — its owners made it up. And when I arrive, JJ at reception says the hotel has been inundated with inquiries, even though it doesn’t launch until May. “We’ve had calls from Russia, America . . .” he says, laughing. “People are going crazy for it.”

When I tell my friends that I’m off to try “lemoga” I’m met with a cynical “whatever next” eye-roll. Take any activity under the sun (salutation) and some enterprising soul has thought of blending it with a few asanas. There’s doga (yoga with dogs) and yoga with ponies, bunnies and goats (Khloé Kardashian is a fan of the latter) and that’s just the fluffy stuff. In Los Angeles I have tried 4.20 yoga (where we passed around a spliff before practice), SUP yoga (balancing on a paddleboard) and sex yoga (don’t ask).

If plinky whale music isn’t your thing, gyms in London offer disco yoga and heavy metal yoga. There’s chroma yoga (done under coloured lights), acroyoga (where you balance on your partner — Gisele Bündchen and Lena Dunham do it) and aerial yoga (where you try not to fall out of a silk sling). In Germany you can do beer yoga. In Delhi you can try laughing yoga. In New York you can sing while you stretch at karaoke yoga. Yet no one has been bendy with lemurs before.

Armathwaite Hall is your typical country house hotel, with an outdoor hot tub, a roaring fire and acres of immaculate grounds. It also happens to be right next to the Lake District Wildlife Park, home to red pandas, mandrills and “Europe’s oldest gibbon”. The park was already offering “lemur encounters” for visitors, along with “meet the meerkats” and “walk with alpacas” experiences, but when the hotel staff saw pictures of lemurs warming their bellies in the sun, looking pretty Zen, the idea for lemoga was born.

According to the website, doing yoga with lemurs “heightens the sense of wellbeing for both lemur and human” and “they make great workout partners . . . helping reduce stress and blood pressure”. Quite how scientific this is isn’t clear, although there is at least quite a lot of research that indicates that exercising outdoors can improve vitality and mental health.

Richard Robinson, the park manager of Lake District Wildlife Park, looks as weathered and gruff and passionate about animals as you would expect a zookeeper to be. He admits that he had reservations about letting Lycra-clad yoga fans into his lemur enclosure. “It is really important that the lemurs aren’t removed from where they feel comfortable, and that they get to choose whether they interact or not,” he says. “Of course they’re not really doing yoga, but ultimately the lemurs seem to enjoy it, and if it captures people’s imaginations and raises awareness of this amazing animal then why not?”

Lemurs could do with the publicity. The deforestation of their habitat in Madagascar — where political instability and rising levels of poverty have accelerated illegal logging — along with the illegal pet trade and people hunting them for food means that lemurs are one of the most endangered animals. More than 90 per cent of lemur species are facing extinction, according to the International Union for the Conservation of Nature. This is another rationale behind the creatures’ presence at the class: for every lemoga break booked, Armathwaite Hall will donate 10 per cent of the cost to the charity Seed Madagascar. There are 105 species of lemur, but it’s the ring-tailed kind — King Julien, for fans of the film Madagascar — that I’ll be namastay-ing with.

It’s not exactly typical to sign a waiver before a yoga class, or enter the space through an electric fence with a man in overalls carrying a bucket of carrots, dodging little piles of black lemur poo. The lemurs seem pleased to see us; they are very inquisitive and one instantly grasps my shin with its black, leathery little hands. I’m amazed at how human their fingers seem — they even have fingernails.

Emily, an instructor in the hotel gym and my personal yoga teacher today, unfurls our mats on the grass as the troop play among us. After the obligatory selfie session (don’t judge me — this is Instagram gold), we begin by sitting cross-legged and taking deep breaths. “You can close your eyes if you feel comfortable,” says Emily. “But remember there are lemurs about.” It’s pretty hard to forget.

As we move slowly through a sun salutation, I can feel the lemurs’ perky wet snouts sniff my bare feet, and almost sit on one that has taken up residence on the back of my mat when I’m about to go back into child’s pose. When Emily instructs me to kneel up into a side plank, a lemur decides to clamber up my leg and on to my back. He’s surprisingly light and gentle, but I’m laughing so much that I can barely hold myself up, let alone carry a lemur. I wasn’t even in tree pose.

After a little while my furry fellow yogis get bored and slink off to nibble some hawthorn branches (they are not allowed fruit because it makes them aggressive, apparently). Even without the lemurs, this would be a pretty memorable spot to practise yoga in, with the sunlight on my face, the sound of the birds and the dramatic Skiddaw mountain in the distance. A few families pass and take photos of me in warrior one through the fence, but quickly move on. I’m a lot less interesting than the zebras next door.

It’s not long before I forget that I’m doing yoga because observing the lemurs interacting is so fascinating. One of them, Gloria, has just had a baby and her tiny mouse-like pup is firmly attached to her belly, like a paranoid tourist’s fluffy backpack. Lemurs are female-dominant and the group gather around her, protecting her and licking her fur. Seeing these creatures up close is a privilege. Even the best HD Attenborough doesn’t show quite how soft and fluffy their coats are, or capture their bright yellow eyes with their comically droopy, languid-looking black lids. When they stick their bums in the air (as they do frequently) or rest on their back legs looking chilled out, it’s pure bliss to watch.

However, just when I feel like we’re bonding, my hour-long lemoga session is up, without even a farewell om. As I walk back across the fields to the hotel, I feel euphoric, but whether it’s the yoga, the lemurs or the Lake District views — or a combination of all three — is hard to say. Robinson says he won’t be trying lemoga any time soon. “I’m more of a Pilates man,” he quips.
The Lemoga Spa Break costs £495 for two people sharing a room, including breakfast, a three-course dinner and a spa treatment, armathwaite-hall.com 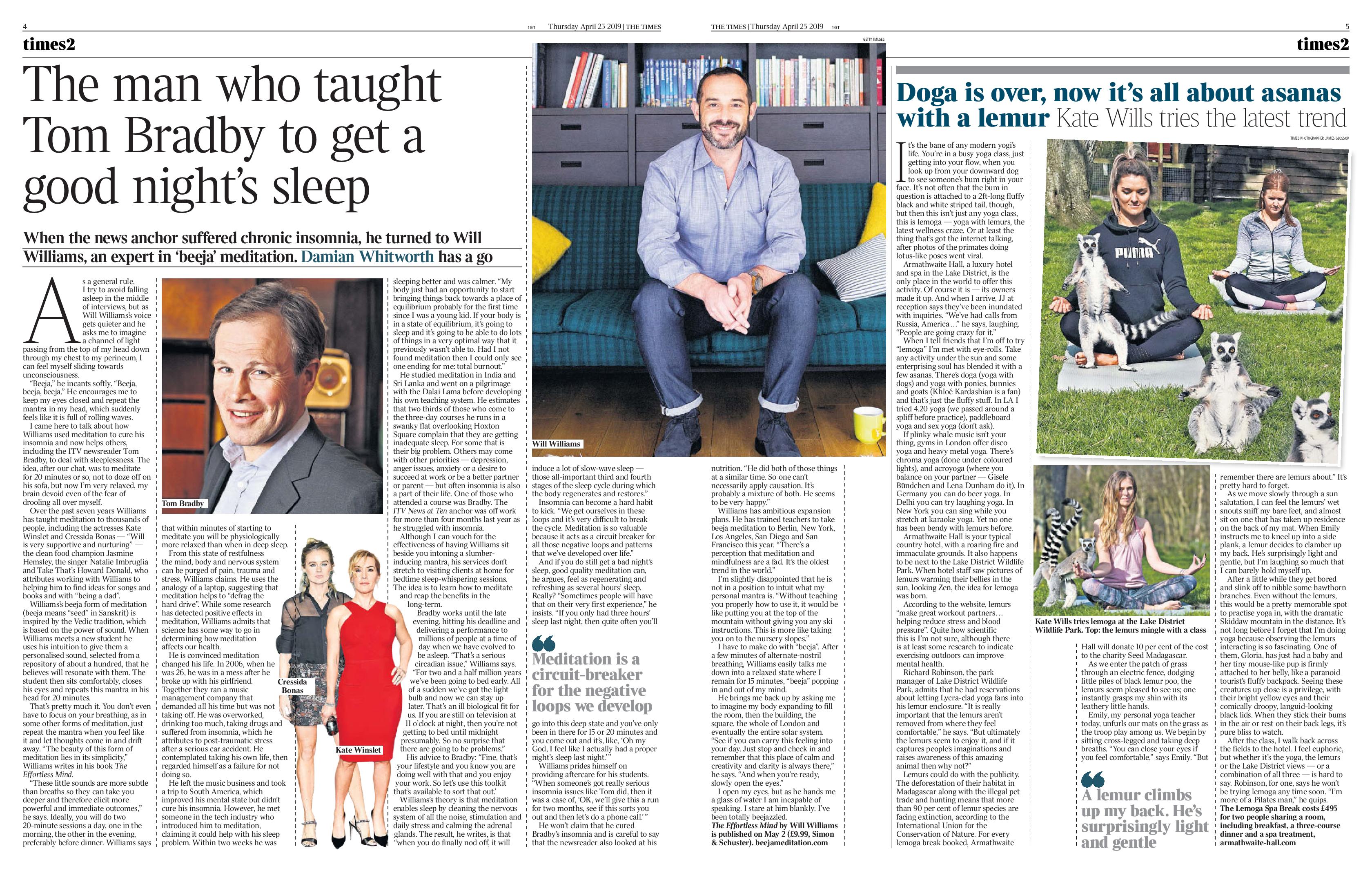 A walk on the wide side