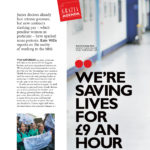 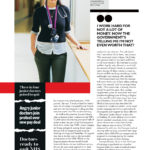 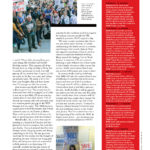 This Saturday, an army of doctors will take to the streets for the biggest, loudest, and most impassioned protest yet. We’ve already seen demonstrations across the UK over the ‘devastating’ new contracts health secretary Jeremy Hunt is proposing. And the voices are only getting louder, as more than 13,000 junior doctors look set to take part in the latest London rally.

So why are our medics so angry? As well as changes to pay and hours, female doctors are set to be penalised for the first time for taking maternity leave and working part-time.Jessica Butler, 30, works as a junior doctor in acute and internal medicine at a London hospital. She had just got off a 12-hour night shift when she heard about the proposed changes to her contract via a Facebook post. ‘I felt gutted,’ she says. ‘I work so hard, for what’s not a lot of money compared to my friends, and now the government’s telling me I’m not even worth that? It was totally demoralising.’

As well as the protests, Jeremy Hunt’s plan to impose a new contract on the UK’s 53,000 junior doctors has prompted talk of strike action. As part of the government’s drive for a ‘7-day NHS’, many changes are being instigated, among them that junior doctors will no longer be paid extra money for working evenings and Saturdays. It’s argued that this is the first step to inevitably privatising the NHS. While in the long run, junior doctors would financially benefit from a private healthcare service, they are the ones most opposed to it. And ironically, if junior doctors do leave their jobs in protest, the NHS will have to pay for locum doctors, which will cost even more.
‘I regularly work outside my normal hours, rarely take breaks, work nights and weekends and, after tax, I’ve calculated that I earn about Â£9 an hour,’ says Jessica. ‘The emotional strain is huge. On Friday, two patients died on my ward and I had to tell their families. My husband is a pilot and he’s legally only allowed to work half the amount of hours I work in a month for safety reasons. If these contracts come in, doctors will be working even longer shifts and might start making silly mistakes.’
The government says that the changes will come with a rise in basic salary, making them ‘cost neutral’ with ‘no savings being made’. This means that, in theory, doctors should be paid the same. But cutting supplements given for antisocial hours and London weighting (cost of living is higher in the capital) could mean many face a pay cut of between 10 and 30%. The British Medical Association has described the contracts as ‘unsafe and unfair’, and a social media campaign has led to a groundswell of sympathy and support for those affected.

The term ‘junior doctor’ is also a bit misleading. It covers all practitioners who haven’t reached consultant level — many junior doctors are in their forties. Basic salaries start at around Â£23,000, enhanced by add-ons. And because medical training takes so long, most will have large amounts of student debt (Â£80,000 on average) and are expected to continue paying for courses and exams as part of their training.

Georgie Fozard, 29, is in her third year of training in psychiatry at a London hospital (after five years of medical school and two foundation years as a junior doctor). ‘When I heard about the new contracts I was horrified. The thought
of being forced to work more nights and weekends for the same or even less money is awful. Those shifts are gruelling, you miss things like holidays and friends’ birthday parties. This summer all of my friends went on a big holiday to Ibiza, but I couldn’t go because of work. I’m still paying off my student loan, I spent Â£2,500 on exams in the last two years, and things are already tight. My salary is Â£34,402 but I just bought a flat so I don’t know how
I’d manage on 30% less money.’

And women specifically will be hit, as Jessica points out: ‘Pay progression for maternity leave will be scrapped, so if I take a year out to have kids I’ll be on even less money when I come back. Given 77% of doctors are women, this will inevitably lead to a massive gender pay gap in the NHS.’ Georgie feels the same: ‘The NHS has been a great place to work for women, but if these contracts come in, we’ll leave in droves. How could women afford childcare or be able to spend any time with their babies?’

Mira Runkel, 26, is in her first training year at a hospital in Croydon and had planned to become a surgeon, but now she’s got doubts. ‘I’m so frustrated that I’ve even thought about changing careers and doing something in the City. No one goes into medicine for the money, but the thought of spending the next 10 years not being paid fairly and being too tired and overworked to help patients is so depressing. I’d seriously consider leaving the country if these contracts are imposed. I want to have a family, and in New Zealand and Australia you get more money for working less hours.’ In the 10 days after the new contract was announced, the GMC had 3,468 requests for the certificate needed to register for work as a doctor outside the UK; usually it processes 20-25 requests a day.

‘We want to raise awareness that this is not just about junior doctors, it’s about undermining the health service as a whole,’ says Georgie. Last month, Jeremy Hunt also angered consultants when he tried to impose compulsory weekend working. Many started the hashtag ‘I’m In Work Jeremy’ in response. GPs are currently planning a mass walkout over Hunt’s plan to force family doctors to offer a seven-day service. And a recent survey found that
1 in 4 NHS nurses now want to leave.

In coming weeks, leading healthcare body BMJ will take the unprecedented step of balloting its members for strike action. Jessica isn’t sure yet if she’ll join them. ‘Although there’ll still be a skeleton service, I worry about how it will affect patients,’ she says. ‘And I feel like it will go against our oath to provide the best care. But then that’s exactly what these contracts will do.’ Georgie asks that people show support for doctors on social media, sign the online petition and join the protest. ‘I wanted to become a doctor because I think we have the best healthcare system in the world,’ adds Jessica. ‘But I’m worried that this is the beginning of the end for the NHS.’
Support junior doctors — sign the petition now

62 hrs in life of a junior doctor

Monday: 12 hours
08.00 Arrive for ward round.
14.30 Eat while writing discharge letters. Check results and tests.
16.55 Put any patients the team
are concerned about into hospital overnight so a doctor will see them.
18.30 Discharge letters/referrals.
19.00 A patient’s family members want to speak to a doctor. I explain how we plan to help their loved one.
20.00 Finally, I go home.

Tuesday: 12 hours
08.00: Ward round. We spend an hour and a half treating an unwell patient who thankfully stabilises. 14.00 Order scans/manage patients.
16:30 The patient from this morning is sick again. The family feel further intervention would do more harm than good. The patient is unlikely to recover. I comfort the family. Then I take 5 minutes to cry — being part of someone’s most vulnerable moments can be very emotional. A nurse gets me a cup of tea. I carry on.
18:30 I bleep the on-call doctor about another patient of concern. 19:15 I visit the morning patient, now unlikely to get through 48 hours.
20.00 I leave. Exhausted.

Wednesday: 13 hours
08.30 Ward round
12:00 Discharge letters, referrals.
14:00 I look in on the patient who is dying. This patient is lucky, a family member is by their side at all times. Sad to think often this isn’t the case.
17:00 I’m on call. Check bloods, examine patients, do prescriptions.
18.15 Crash bleep goes off. Cardiac arrest. Patient’s heart is beating by itself again. We work to decipher the cause. Back to assessing patients.
21:45 Do a hand-over and leave.

Thursday: 13 hours
08:30 Ward round attended by consultants, so more pressure.
10:00 Patient mentioned earlier has died. I give family my condolences. They are devastated. I feel so sad for them. Continue with my round.
17:00 On call. 8:30pm crash call: patient collapsed and hit their head.
21:45 Go home.