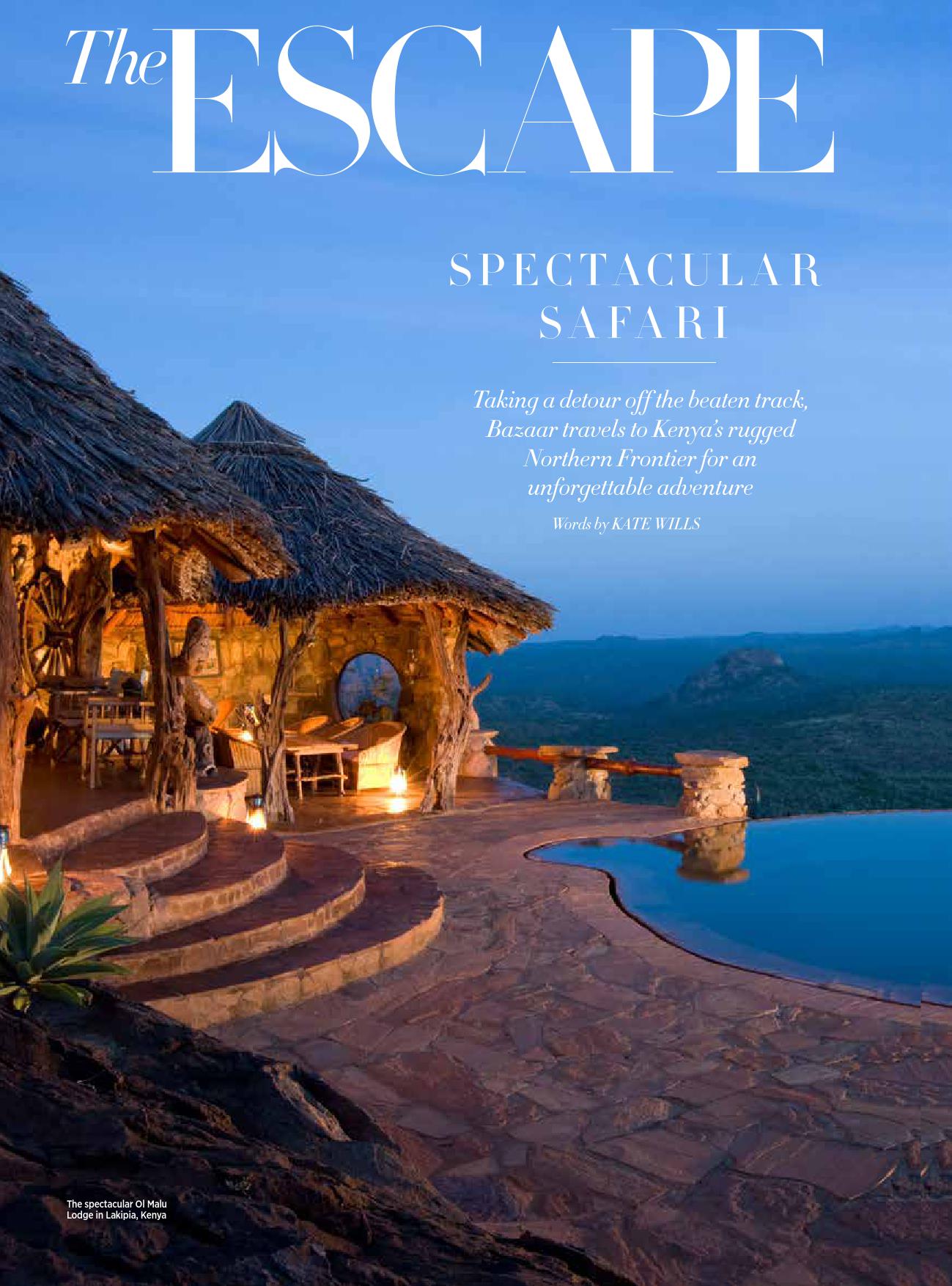 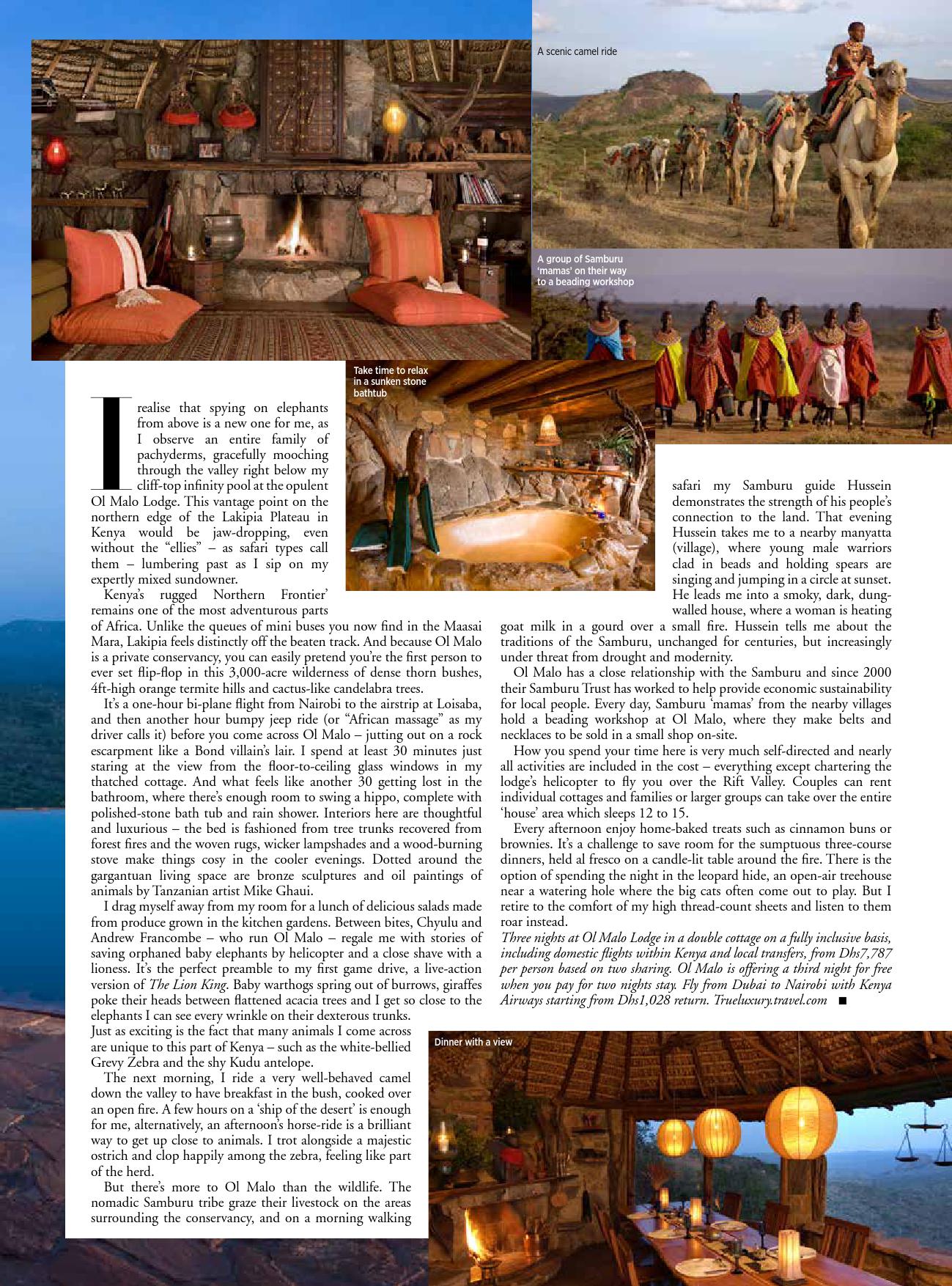 Spying on elephants from above is a new one for me. A whole family of pachyderms, gracefully mooching through the valley right below my cliff-top infinity pool at the opulent Ol Malo Lodge. This vantage point on the northern edge of the Lakipia Plateau in Kenya would be jaw-dropping even without the “ellies” – as safari types call them – lumbering past as I sip my sundowner.

Kenya’s rugged ‘northern frontier’ remains one of the most adventurous parts of Africa. Unlike the queues of mini-buses you now find in the Maasai Mara, Lakipia feels distinctly off the beaten track. And because Ol Malo is a private conservancy, you can easily pretend you’re the first person to ever set flip-flop in this 3000-acre wilderness of dense thorn bushes, 4ft-high orange termite hills and cactus-like candelabra trees.

It’s a one-hour bi-plane flight from Nairobi to the airstrip at Loisaba, and then another hour’s bumpy jeep ride (or ‘African massage’ as my driver calls it) before you come across Ol Malo – jutting out on a rock escarpment like a Bond villain’s lair. I spend at least 30 minutes just staring at the view from the floor-to-ceiling glass windows in my thatched cottage. And what feels like another 30 getting lost in the bathroom, where there’s enough room to swing a hippo, complete with polished-stone bath tub and rain shower. Interiors here are thoughtful and luxurious – the bed is fashioned from tree trunks recovered from forest fires and the woven rugs, wicker lampshades and a wood-burning stove make things cosy in the cooler evenings. Dotted around my gargantuan living space are bronze sculptures and oil paintings of animals by Tanzanian artist Mike Ghaui.

I drag myself away from my room for a lunch of delicious salads made from produce grown in the kitchen gardens. Between bites, Chyulu and Andrew Francombe – who run Ol Malo – regale me with stories of saving orphaned baby elephants by helicopter and a close shave with a lioness. It’s the perfect preamble to my first game drive, which ticks all the boxes like a live-action version of <The Lion King>. Baby warthogs spring out of burrows, giraffes poke their heads between flattened acacia trees and I get so close to the elephants I can see every wrinkle on their dexterous trunks. Just as exciting is the fact that many animals I come across are unique to this part of Kenya – such as the white-bellied Grevy Zebra and the shy Kudu antelope.

Game spotting on four wheels is good, but one hump can be even better. The next morning, I ride a very well-behaved camel down the valley to have breakfast in the bush and discover that sausages really do taste better when cooked over an open fire. A few hours on a ‘ship of the desert’ is enough for me, but if you want to extend your hump day then the lodge will happily organise a camel safari into the wild expanses of Northern Kenya. Alternatively, an afternoon’s horse-ride is a brilliant way to get up close to animals who get skittish when confronted by the roar of an engine. I trot up alongside a majestic ostrich and clop happily among the zebra. On my chestnut stallion I feel like part of the herd (even if they do have snazzier outfits).

But there’s more to Ol Malo than the wildlife. The nomadic Samburu tribe graze their livestock on the areas surrounding the conservancy, and on a morning walking safari my Samburu guide Hussein demonstrates the strength of his people’s connection to the land. He points out various animal tracks which to me just look like marks in the dirt, as well as the plants and animals that have medicinal value, such as the powerful pincers of stitching ants, which the Samburu use in lieu of hospital stiches if they injure themselves.

That evening Hussein takes me to a nearby manyatta (village), where young male warriors clad in beads and holding spears are singing and jumping in a circle at sunset. He leads me into a smoky, dark, dung-walled house, where a woman is heating goat milk in a gourd over a small fire. Hussein tells me about the traditions of the Samburu, unchanged for centuries, but increasingly under-threat from drought and modernity. It’s a fascinating glimpse into a way of life completely removed from my own.

Ol Malo has a close relationship with the Samburu and since 2000 their Samburu Trust has worked to help provide economic sustainability for local people. Every day, Samburu ‘mamas’ from the nearby villages hold a beading workshop at Ol Malo, where they make belts and necklaces to be sold in a small shop on-site. I pop my head in the next day and find a friendly young woman, who threads tiny glass beads onto my ankle, while I admire her multiple wreaths of intricate necklaces.

How you spend your time here is very much directed by you and nearly all activities are included in the cost — everything except chartering the lodge’s helicopter to fly you over the Rift Valley. Couples can rent individual cottages and families or larger groups can take over the entire ‘house’ area which sleeps 12-15. When children inevitably get bored of game drives, they can feed baby animals on the ranch, help the chef make fudge in the kitchens or cycle through the plains.

Tea and coffee is served in your lounge every afternoon, along with a home-baked treat such as cinnamon buns or brownies. It’s a challenge to save room for the sumptuous three-course dinners, held al fresco on a candle-lit table around the fire. After much star-gazing and comparing animal sightings with other guests, everyone slopes off to bed.

There is the option of spending the night in the leopard hide, an open-air tree-house near a watering hole where the big cats often come out to play. But I retire to the comfort of my high thread-count sheets and listen to them roar instead.