Rebels with a Cause

There’s incense in the air, flags billowing in the breeze, people dancing and singing and passing around plates of vegetable curry; there are rows and rows of tents and even a compost loo. Were it not for the signs saying ‘No alcohol or drugs’ — or the fact that we’re slap bang under Marble Arch with traffic whizzing around us — this could be a boutique festival. But this is the base camp of Extinction Rebellion, the climate change protest movement that swept across London last week.

After 10 days of marches and disruption — and 1,130 arrests — the campaign has gone global, with events in more than 30 countries and 40,000 new sign-ups to its mailing list. But who is behind XR (as it’s known) and how did this apparently leaderless, tech-smart group create the future of protest by pulling off what organisers are calling ‘the biggest act of civil disobedience in modern British history’?

The movement took shape in early 2018 in the cafés of the hippy enclave of Stroud in Gloucestershire. ‘We had a 25-step process coming up with the name Extinction Rebellion,’ says co-founder Gail Bradbrook, 47, a campaigner and strategy director who has a PhD in molecular biophysics. ‘To be honest we nearly fell out about it. There were some in the group who felt it was too strong, but we also knew people wanted something ambitious that would call this entire system into question.’ It’s arguably this apocalyptic vision, what Bradbrook calls ‘emergency-mode messaging’, which has been pivotal to XR’s success. Previous climate change groups have avoided being too doom-mongering, but Bradbrook says people are ready for it. ‘We’re not just being dramatic talking about a human extinction — that’s the pathway we’re on,’ she says bluntly. ‘We have to look at the bigger picture. If your child had cancer and it was unlikely they were going to survive, you’d do everything in your power to fight it.’

From its HQ in London, the campaign has utilised tactics used by previous social movements and non-violent civil disobedience action, from the suffragettes to Democrat Bernie Sanders’ nomination campaign. They learnt lessons from other protests, such as Occupy, and banned alcohol and drugs in order to keep the atmosphere peaceful and controlled. The group has a ‘holacratic’ structure with no leader, and is instead made up of autonomous ‘affinity groups’ which act together and communicate via WhatsApp. There are about 50 full-time workers in its London office. The movement feels incredibly well-organised and remarkably tech-savvy. At the camp in Marble Arch, for instance, posters with QR codes enable people to sign up instantly, and banners encourage streaming of XR Radio. ‘Nobody knows what everybody is doing at any given moment,’ explains Bradbrook. ‘But lots of people have worked super, super hard to pull something amazing off.’ Since this wave of protests began, XR has raised almost £200,000.

Liam Geary Baulch, 26, an artist from Lewisham, got involved in XR in its first few months after campaigning against air pollution with a group called Stop Killing Londoners. ‘The difference with XR is that people who have never protested before are feeling able to sit in the road and have their voice heard,’ he says. ‘It’s grown so quickly. This is not a small group of trained activists, this is a mass movement.’ The occupations — which saw a bright pink boat with thousands of protesters shutting off all traffic to Oxford Circus, and Waterloo Bridge turned into a garden bridge with trees and pot plants — were notable for appealing to a broader demographic than usual, from pre-teens to retirees. There were the tearful teenagers of XR Youth, who unfurled a banner saying ‘Are We the Last Generation?’ at Heathrow, all the way through to Phil Kingston, the 83-year-old grandfather who glued himself to the DLR. Families with children, bankers, call centre workers, nurses and grandparents were among the thousands of first-time protesters.

Nicola Manwood, 36, a management consultant from Brixton, says that she was inspired to come down to Parliament Square with her two children after seeing footage of the protests on Instagram. ‘To be honest I’ve never even signed a petition against climate change before, but this message is just so powerful,’ she says. ‘I read the UN report about there only being 12 years left to avert catastrophe and I just think, “What are we leaving for our kids?” I feel a lot more informed after coming here today. Extinction Rebellion has been an epiphany for me.’ Amy, 23, a former librarian living in east London, joined XR a week ago and has the group’s logo — a black hourglass — painted on her cheek. ‘It’s really important that the climate crisis isn’t just an eco-leftist thing,’ she says. ‘I’m vegan, I’m bisexual, I’m a witch, but I leave those aspects of myself behind when I come here because we don’t want to alienate anyone. XR is for everyone who cares about their future and their kids’ future.’ 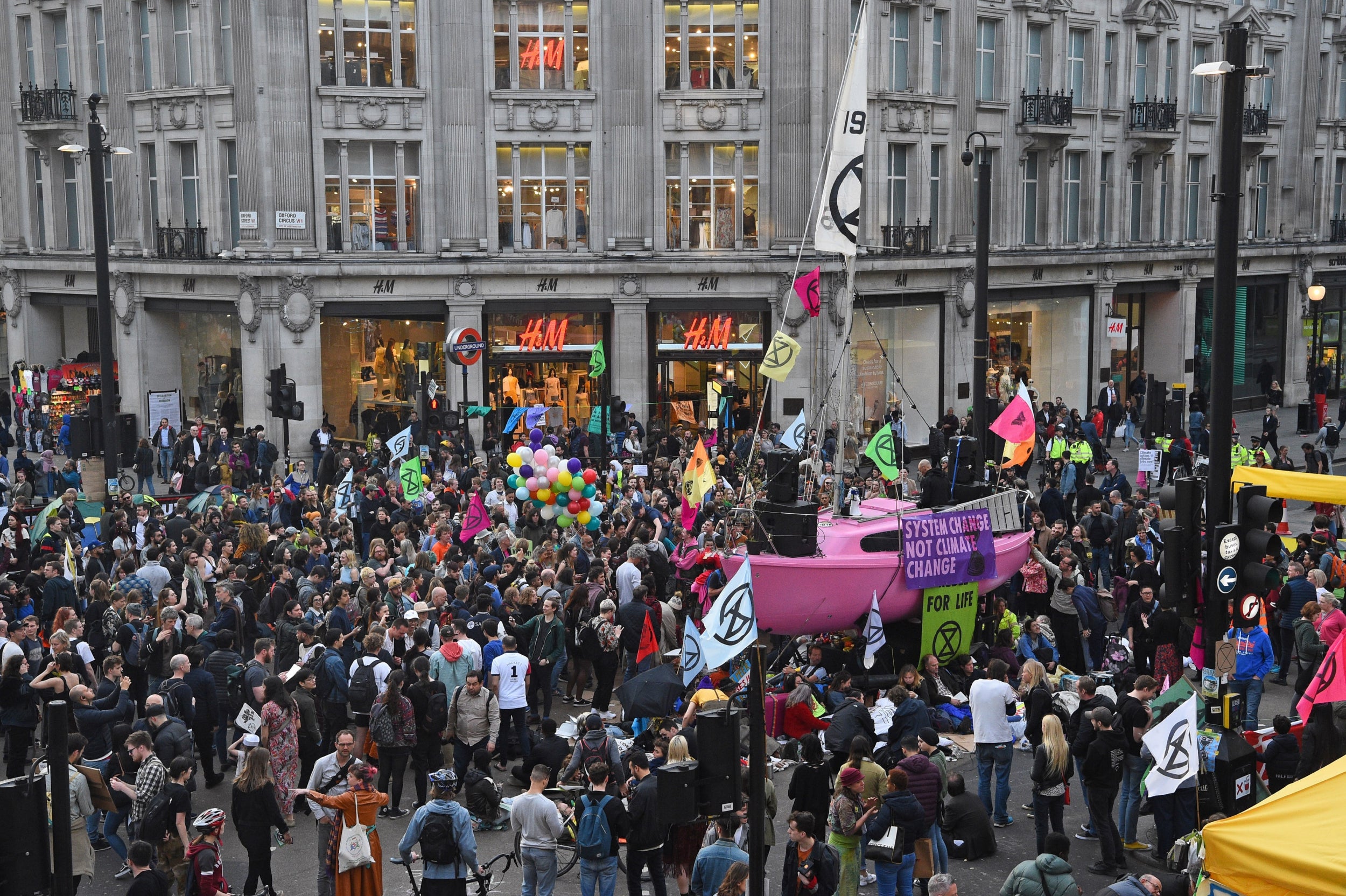 Writer and performer Jolyon Rubinstein, who created BBC3 show The Revolution Will Be Televised, says that he’s been going to protests for years but has never seen anything like XR before. ‘I’ve been stunned at how new this feels compared to all those yoghurt-weaver Green Gathering-type festivals we’ve seen for decades,’ he says. ‘XR are using similar tactics to protests in the past — occupying public spaces and so on — but unlike say Tahrir Square or Occupy, which had no new ideas for how to change things, these guys are saying, “Look at the Paris agreement, it’s all laid out what we need to do but you just don’t want to do it.” They’ve managed to do what seemed impossible, which is to get climate change on the front page of every newspaper.’

Extinction Rebellion has three core demands: the government must ‘tell the truth about the scale of the ecological crisis’ by declaring a climate emergency; the UK must drastically cut its greenhouse gas emissions, hitting net zero by 2025; and there must be a citizens’ assembly to devise policy to tackle the climate crisis. Creating a zero-emissions UK in just six years represents a huge, and some would say impossible, goal. It would mean dramatically cutting travel by car and plane, no more gas heating, major changes in food production — steaks would become a distant memory — and the construction of swathes of wind and solar plants.

This week the Committee on Climate Change will announce revised targets for the UK, including when the country should aim to reach net zero emissions (it previously set an 80 per cent reduction by 2050). ‘Yes, you could decarbonise Britain by 2025, but the cost of implementing such vast changes at that speed would be massive and hugely unpopular,’ says Lord Turner, former chairman of the climate change committee. ‘2050 is doable and desirable and would have an insignificant overall cost to the economy.’

Responding for the Government, Claire Perry, the energy minister, rejected the idea of a climate emergency — ‘I don’t know what that would entail’ — and said that she had reservations about the protests, which had caused ‘disruption for thousands of hardworking Londoners’. Police rest days were cancelled over the Easter weekend to deal with the protests, as more than 1,000 officers were deployed across the city, including extra officers called in by The Met from neighbouring forces. Nigel Farage has called the XR campaign ‘economic terrorism’ and its actions have reportedly cost London businesses £12m. Activists also caused more than £6,000 of damage at the Shell headquarters.

XR has also been criticised for being predominantly white and middle-class, with Nick Ferrari on Sky News calling it a ‘middle-class eco-activist temper tantrum’. It’s been pointed out that this demographic has less to fear when being arrested than other groups, for example young black or Muslim men. It’s something Jordan Tannahill, 30, a playwright living in Woolwich, was aware of when he became one of the XR ‘arrestables’ on Waterloo Bridge, and was held in police custody for 13 hours. ‘There was a surprisingly convivial feeling in the police van between the arrested protesters and the police,’ he says. ‘But I acknowledge that as a white, middle-class person, this a privileged and rare experience of arrest and detention.’

So what’s next? Bradbrook says that everything XR has done so far has ‘surpassed expectations… people have been waiting for this moment’. She adds that there will now be a debrief before they strategise the next move. ‘XR groups are free to do what they want, they don’t need our permission,’ she says. ‘So other things may happen to keep the momentum going.’ Indeed, nine XR activists have announced they will stand in the European elections on 23 May, under the name Climate Emergency Independents. And at the time of going to press, representatives from the movement were meeting with senior politicians, including Sadiq Khan.

The clean-up has been completed at Marble Arch, and all that’s left is chalk graffiti saying ‘Rebel for Life’ and a suspected Banksy, created at night after the closing ceremony. In the artist’s trademark all-caps, it reads: ‘From this moment despair ends and tactics begin.’