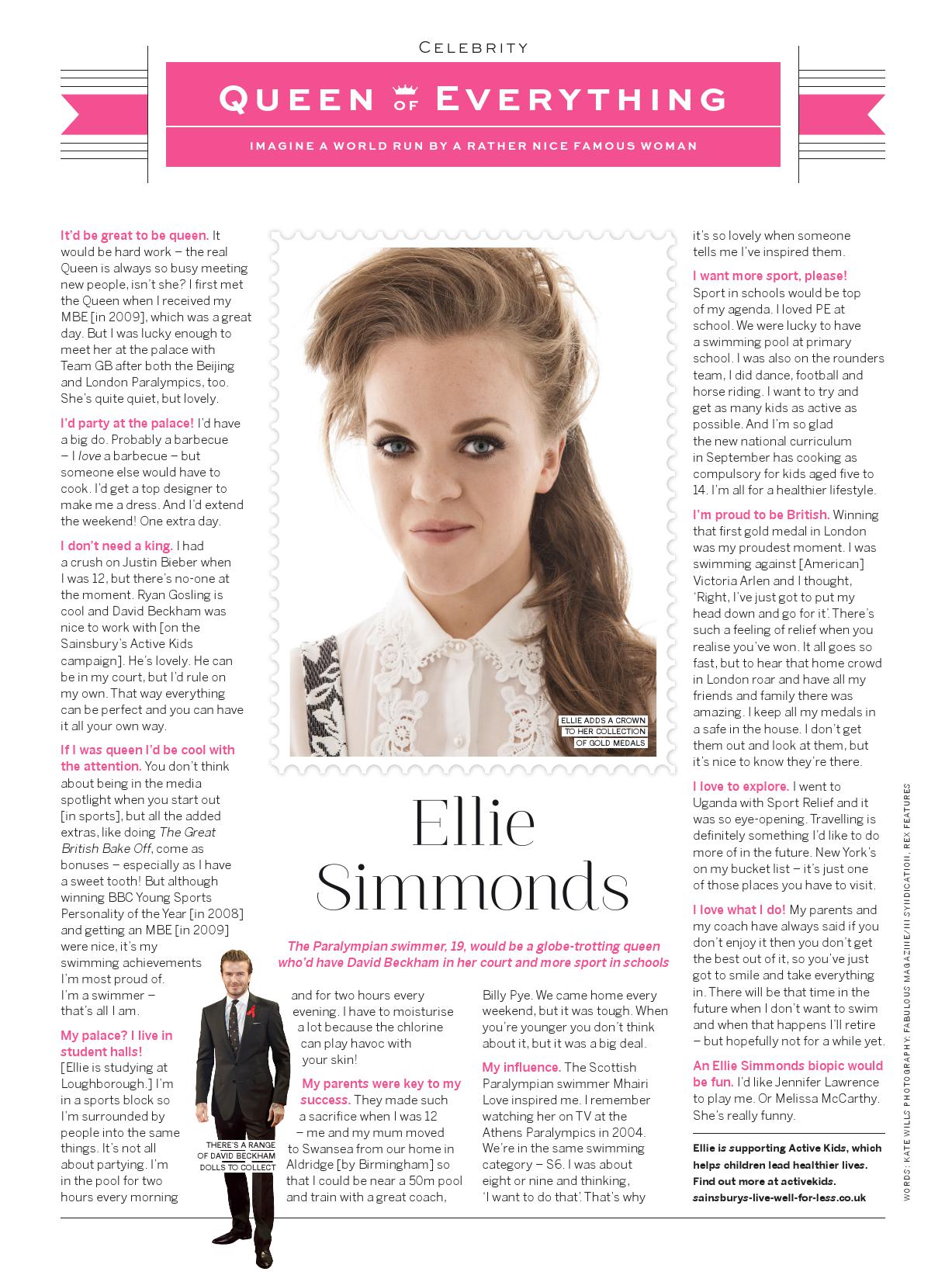 Queen of Everything: Ellie Simmonds

The Paralympian swimmer, 19, would be a globe-trotting queen who’d have David Beckham in her court and more sport in schools

It’d be great to be queen. It would be hard work — the real Queen is always so busy meeting new people, isn’t she? I first met the Queen when I received my MBE [in 2009], which was a great day. But I was lucky enough to meet her at the palace with Team GB after both the Beijing and London Paralympics, too. She’s quite quiet, but lovely.

I’d party at the palace! I’d have a big do. Probably a barbecueÂ — I love a barbecue — but someone else would have to cook. I’d get a top designer to make me a dress. And I’d extend the weekend! One extra day.

I don’t need a king. I hadÂ a crush on Justin Bieber whenÂ I was 12, but there’s no-one at the moment. Ryan Gosling is cool and David Beckham was nice to work with [on the Sainsbury’s Active Kids campaign]. He’s lovely. He can be in my court, but I’d rule on my own. That way everything can be perfect and you can have it all your own way.

If I was queen I’d be cool with the attention. You don’t think about being in the media spotlight when you start out
[in sports], but all the added extras, like doing The Great British Bake Off, come as bonuses — especially as I have
a sweet tooth! But although winning BBC Young Sports Personality of the Year [in 2008] and getting an MBE [in 2009] were nice, it’s myÂ swimming achievements I’m most proud of.Â I’m a swimmer —Â that’s all I am.

I want more sport, please!Â Sport in schools would be topÂ of my agenda. I loved PE at school. We were lucky to haveÂ a swimming pool at primary school. I was also on the rounders team, I did dance, football and horse riding. I want to try andÂ get as many kids as active as possible. And I’m so gladÂ the new national curriculumÂ in September has cooking as compulsory for kids aged five to 14. I’m all for a healthier lifestyle.

I’m proud to be British. Winning that first gold medal in London was my proudest moment. I was swimming against [American] Victoria Arlen and I thought, ‘Right, I’ve just got to put my head down and go for it’. There’s such a feeling of relief when you realise you’ve won. It all goes so fast, but to hear that home crowd in London roar and have all my friends and family there was amazing. I keep all my medals in a safe in the house. I don’t get them out and look at them, but it’s nice to know they’re there.

I love to explore. I went to Uganda with Sport Relief and it was so eye-opening. Travelling is definitely something I’d like to do more of in the future. New York’s on my bucket list — it’s just one of those places you have to visit.

I love what I do! My parents and my coach have always said if you don’t enjoy it then you don’t get the best out of it, so you’ve just got to smile and take everything in. There will be that time in the future when I don’t want to swim and when that happens I’ll retire — but hopefully not for a while yet.

An Ellie Simmonds biopic would be fun. I’d like Jennifer Lawrence to play me. Or Melissa McCarthy. She’s really funny.

My palace? I live in student halls!Â [Ellie is studying at Loughborough.] I’m in a sports block so I’m surrounded by people into the same things. It’s not all about partying. I’m in the pool for two hours every morning and for two hours every evening. I have to moisturise a lot because the chlorine can play havoc with your skin!

My parents were key to my success. They made suchÂ a sacrifice when I was 12Â — me and my mum movedÂ to Swansea from our home in Aldridge [by Birmingham] so that I could be near a 50m pool and train with a great coach Billy Pye. We came home every weekend, but it was tough. When you’re younger you don’t think about it, but it was a big deal.

My influence. The Scottish Paralympian swimmer Mhairi Love inspired me. I remember watching her on TV at the Athens Paralympics in 2004. We’re in the same swimming category — S6. I was about eight or nine and thinking,Â ‘I want to do that’. That’s whyÂ it’s so lovely when someone tells me I’ve inspired them.