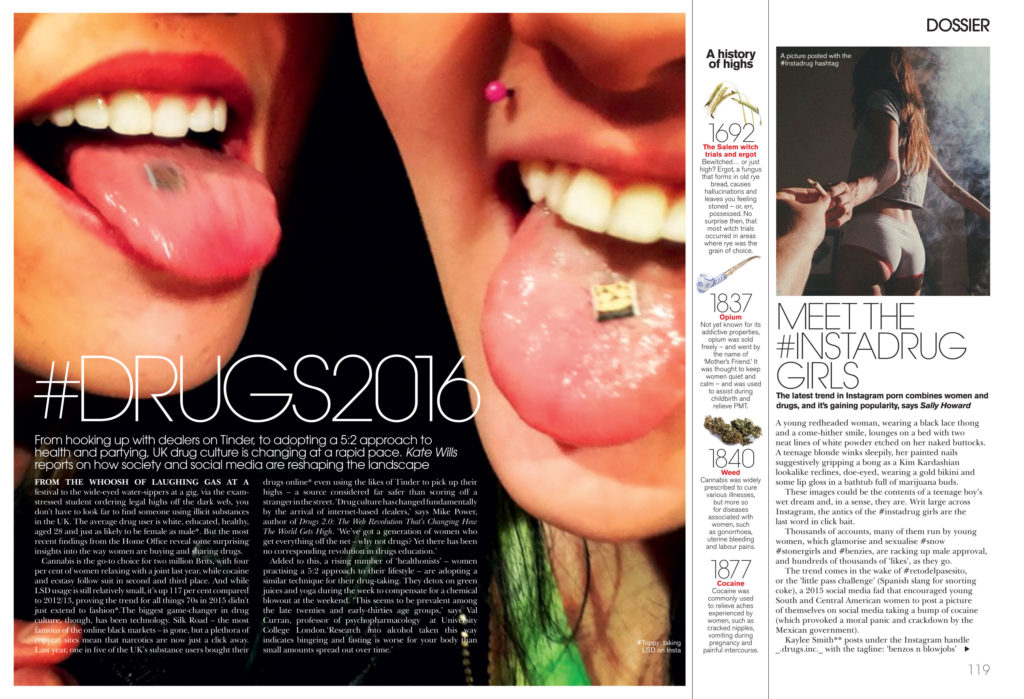 If you’re 29, live in a city and went clubbing this month, chances are that you’ve taken drugs recently.* You may even have bought them online and had them delivered to your door. Although the most recent findings from the Home Office reveal that some aspects of drug culture in the UK have remained constant – cannabis is still the drug of choice for most (4.1% of women smoked weed last year) – there have been some significant shifts. The number of people taking ecstasy – and its active ingredient MDMA – is massively on the rise – up an estimated 37% since 2012/13.

“It used to be the case that men far overtook women in drug consumption,” says Adam Winstock, founder of the Global Drugs Survey. “But we’re seeing an increasing levelling out, partly due to drugs becoming more normalised.” According to the GDS, more people consumed MDMA (the active ingredient in ecstasy) last year than energy drinks (45.2% compared to 44.7%). Women are also three times as likely as men to end up in hospital after taking MDMA, according to the Global Drugs Survey.** Possibly down to the increased purity of your average ecstasy tablet (20mg of MDMA in 2009 compared to 100 mg now).

The strength may have altered but the biggest game-changer in how we take drugs in 2016 is technology. Silk Road – the most famous of the online black markets – may be long gone, but a plethora of other copycat sites and the use of social media to advertise drugs for sale, mean that narcotics are now just a click or two away. Last year, one in five of the UK’s drug-users had bought drugs on online* and for many young women this has removed the risk and inconvenience of meeting a dealer in his home or in his car. Ordering a weekend’s supply can now be done at the same time as swiping for a date.

Since the demise of ecstasy we have seen the rise and fall of several alternative legal highs, most notably mephedrone. This was banned following a relentless media campaign, despite no evidence of deaths and with little attempt to properly estimate its harm. Subsequently we have discovered that it saved more lives than it took because so many people switched from cocaine and amphetamine to mephedrone that deaths from these more toxic stimulants decreased by up to 40%. Since mephedrone was banned in 2010, cocaine deaths have risen again and are now above their pre-mephedrone levels.

Sue Noot, clinical services coordinator for Thames Gateway NHS Trust Addiction Services, says women-specific issues around drug use have been ignored for too long. “Women tend to get unhealthier more quickly than men. Their veins collapse faster, they are more likely to develop abscesses and one of the things some of them like about using drugs is that they lose weight. If they go into rehab and put it back on, they can get very depressed. Those who do stop using often relapse just before they have a period if they’re suffering from PMT. This is almost never taken into account by services.