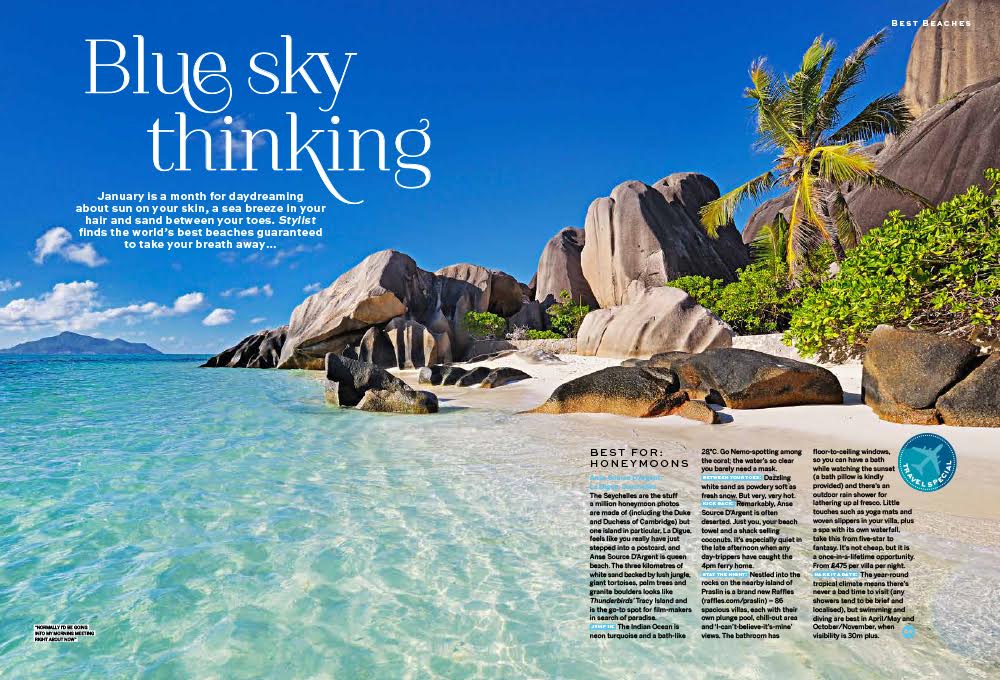 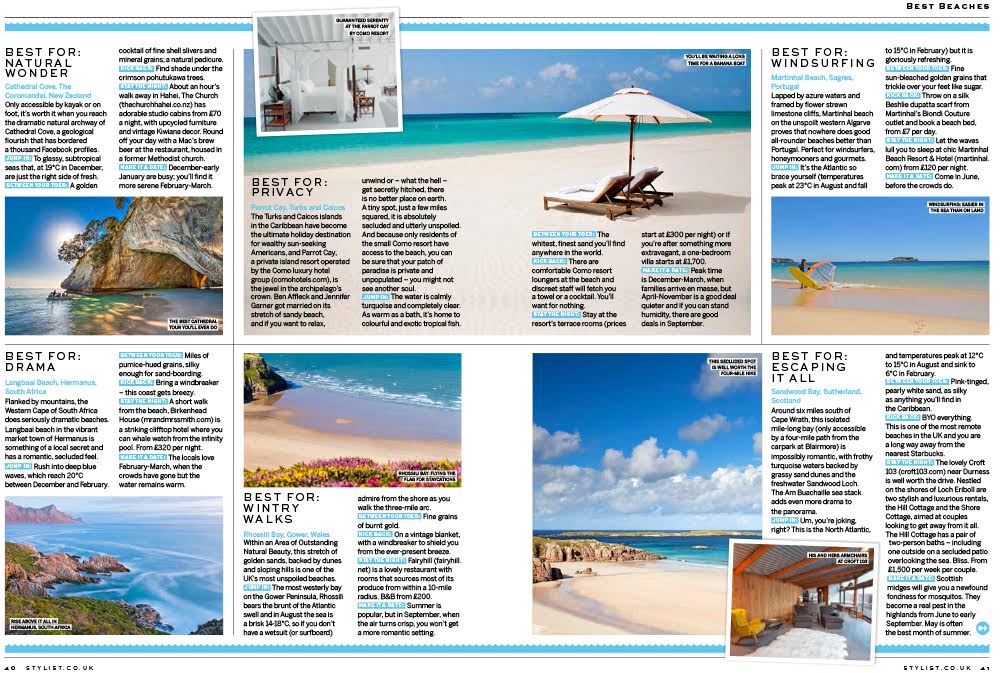 Why So? The Seychelles are the stuff a million honeymoon photos are made on (well, if it’s good enough for Wills and Kate…) but one island in particular, La Digue, feels like you really have just stepped into a postcard, and Anse Source D’Argent is queen be-ach. A bay of white sand backed by lush jungle, giant tortoises, palm trees and granite boulders looks like Tracey Island, and is the go-to spot for film-makers in search of paradise – no wonder they filmed the Bounty ad here.

Jump In: The sea is neon turquoise and basically bath temperature, a balmy 28C. Go snorkelling in the coral and spot a load of Nemos, although the water’s so clear you don’t even need a mask.

Between Your Toes: Dazzling white and as powdery soft as fresh snow. But very, very hot.

Kick Back: Remarkably, Anse Source D’Argent (the word anse means “cove” in French Creole) is deserted. Just you, your beach towel and a shack selling coconuts. It’s especially quiet in the late afternoon when any day-trippers have caught the 4pm ferry home.

Stay The Night: Nestled into the rocks on the nearby island of Praslin is Raffles – 86 spacious villas, each with their own plunge pool, chill-out area and ‘I-can’t-believe-I’m-seeing-this’ views. The bathroom has floor-to-ceiling windows, so you can have a bath while watching the sunset (bath pillow provided) but there’s also an outdoor rain shower for lathering up al fresco. Little touches like yoga mats and woven slippers in your villa, plus a spa with its own waterfall, take this from five star to fantasy. From Â£475 (including 25% service/taxes) per villa per night, single or double occupancy on a B&B basis. www.raffles.com/praslin

Make It A Date: The year-round tropical climate means there’s never a bad time to go, but swimming, snorkelling and diving are best during April/May and October/November, when water is 29C and visibility is 30 metres plus.

Why So? Odysseus, Byron, Napoleon and of course, Captain Corelli and his mandolin, have all lost their heart to Kefalonia, and looking down on Myrtos beach from the road above it’s easy to see why. A perfect crescent of white sand and sea so bright that it glows; you could easily be in the Caribbean not Greece. It’s well worth making the windy, slightly perilous journey down to the beach itself (when we visited a recent earthquake had placed several boulders in the way).

Jump in: Getting in the water can be a struggle too (it’s stony underfoot) but although the sea regularly tops 28C in summer months, it still feels refreshing and salty (in a good way). Look out for mountain goats frolicking on the clifftops as you swim along.

Between your toes: The sand is coarse grain, which means that it doesn’t stick to your skin (winner!) but on the downside, parts of the beach are pebbly…

Kick Back: …which means you may want to rent a lounger for 2 Euro or prepare for a slightly numb bum.

Stay The Night: Villa Zeus has marble columns, a jaw-dropping atrium, an infinity pool and a yoga platform. There are four double rooms, all with en-suite bathrooms, complete with local organic toiletries and a robe and slippers so snuggly you’ll want to hug yourself. There’s a BBQ and pizza oven for outdoor dining, but why bother when you can book your own in-villa chef? From Â£1700 per week, uniquekefalonia.com

Make It A Date: May and October are the very beginning and end of the tourist season so the island is quieter, but the weather and sea are still warm. But Spring probably nudges it, as the island’s wild flowers are in bloom.