“Grace Cod-dington”, the flame-haired Vogue creative director, has her head stuck on a fillet of fish. “Kate Moose” offsets her cheekbones with antlers. “Puffin Daddy” has sunglasses and bling poking out of his plumage. Not the result of a cloning experiment gone very wrong, or the fevered Frankenstein-ish dreams of a fashion editor, but just a few of Angelica Hicks’ latest creations. 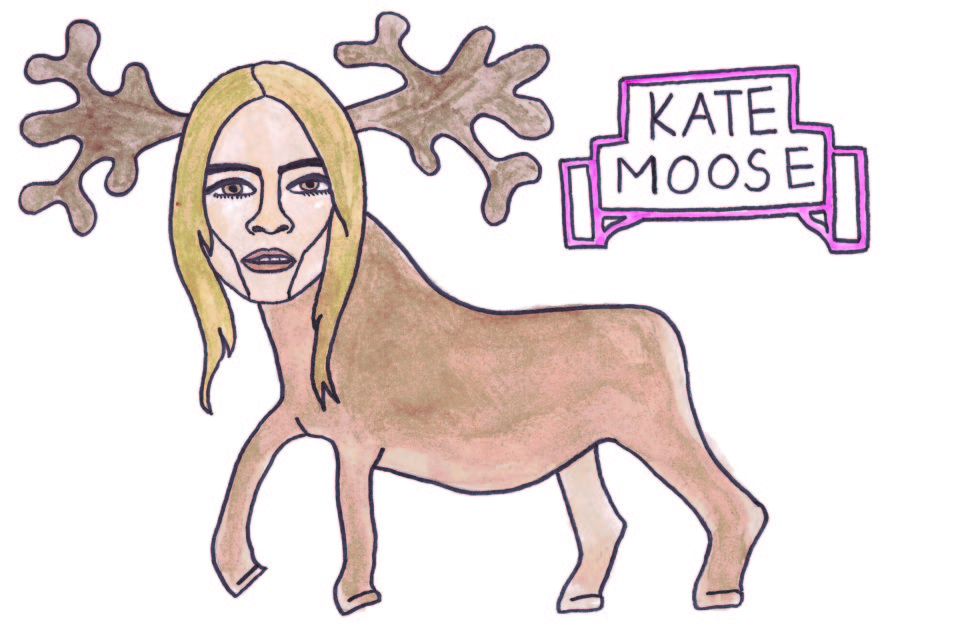 The 24-year-old British illustrator has been dubbed “Instagram’s most-wanted cartoonist” for her witty blending of fashion references and ludicrously silly puns. “I’ve always loved visual humour and pop culture,” says Hicks in her Sloaney drawl (she grew up in Chelsea). “I used to share Old Master paintings with funny captions on Instagram. Then I realised I didn’t have to wait to see something I found funny, I could just draw it myself.”

Her graphic cartoonish style caught the eye of Italian menswear brand Pal Zileri and American designer Tory Burch, but her big break came in 2015, when Insta It Girls Kendall Jenner and Gigi Hadid regrammed Hicks’ drawing of them. “I’d left my phone at home because I’d run out of credit and when I got back I had all these texts saying ‘OMG!’ It was pretty funny.”

From George Cruikshank’s grotesque sketches of 18th-century dandyism, to Osbert Lancaster’s caricatures of post-war snobbery, sartorial whims have been the subject of satire from cartoonists through the ages. For Hicks, the egos and eccentricities of the 21st-century fashion industry are ripe for spoofing. Angelica Hicks’ big break came when Kendall Jenner and Gigi Hadid shared her drawing of them on Instagram “I did a drawing of [fashion critic] Suzy Menkes as Desperately Seeking Susan so it was ‘Desperately Seeking Suzy’ and she was dressed like Madonna,” recalls Hicks. “She wrote a comment saying: ‘Nice drawing but I would never wear that.’ It was quite awkward, because I tried to explain without being: ‘Like, duh!’ ” And I did a drawing of Frida Kahlo saying ‘Frida Nipple‘ in reference to the Free the Nipple campaign and I got these angry messages saying ‘You’re imposing your ideology on this artist’s body’ and just it got so layered. I had to tap out.“

Hicks takes on music, art and politics, too — the fallout from the US election-inspired “Trumpelstiltskin” and “Not My Pez” featuring Donald’s head on a sweets dispenser. Brands and logos regularly pop up — the Warholian Naomi Campbell on an appropriately named can of soup, Spam-ela Anderson or “Mac-Donalds” with eyeliners as fries — and she recently collaborated with the likes of Spanx, Range Rover and the dating app Bumble.

“I like that mix of high and low with fashion and pop culture,” she explains. “Band-Aids the plaster company would be the ultimate for me. It would be so cool to see my ‘Brand-Aids’ [plasters with designer logos on] brought to life.” I don’t spend much time or money following trends and I’ll fill my fridge before I fill my closet — I’m not Carrie Bradshaw.”

Hicks says she grew up doodling, but one suspects in her household it went a bit further than finger paintings pinned to the fridge. Her mother is the interior and fashion designer Allegra Hicks and her father is architect Ashley Hicks. “They weren’t the kind of parents who were down to kick a ball on the beach, so sitting around the table drawing was our family bonding activity,” she says. But GCSE art sucked the joy out of the subject for her. “At my school it was very much like ‘replicate this pre-existing artwork and get an A*’ which I found frustrating,” says Hicks. “I pretty much stopped drawing when I was about 15.” After studying art history at University College London — “not going to art school was my hilarious form of rebellion- I wanted to study economics or something” — she discovered the Dada artist Hannah HÃ¶ch’s photomontages, and was inspired to start making her own work again.

Hicks moved to New York after graduating — “if I’d stayed at home I wouldn’t have the same drive” — and now lives in the West Village, where she spends her days eavesdropping on shoppers for inspiration and uploading one drawing a day to her 31,000 followers on Instagram. Although her family connections obviously come with serious perks — when Hicks first moved to New York she was living with a family friend on the Upper East Side (ahem) — she says the weight of expectation can feel intimidating at times. I love it when someone tags a friend in one of my Instagram pictures. I don’t want to say I’m generating discourse, but hopefully I’m generating jokes.

One day in the future